And the Award Goes To!

The "correspondents" for "Extra" were the hosts and seriously, an hour of Billy Bush is more than I can take. Forget waterboarding as a form of torture. The CIA should just tie some of their prisoners up and made them watch Billy Bush on repeat for three days. At the end of that, even the most hardened James Bond would confess to whatever the CIA wants.

I mean, we all know that awards shows are only nominally about the movies. Nowadays, they're more about seeing what outfits celebrities wear and seeing Jack Nicholson grinning into the camera. So I think they should have just made a cool website and posted the winners. Or maybe put up a site with pictures of gowns they think the female nominees might have worn.

I will say though that as much as I missed seeing the gowns and seeing Johnny Depp on stage winning his first Golden Globe ever for Sweeney Todd, I was consoled that the entire thing was over in an hour.

Oh, and another great thing was that "Atonement" won for Best Motion Picture, Drama. I loved the book and the movie was fab as well. I've seen most of the movies that were nominated for best drama and Atonement is still the one I'm thinking about the most even though it's been around six weeks since I've seen it. I think you should go see it, but be prepared to cry. 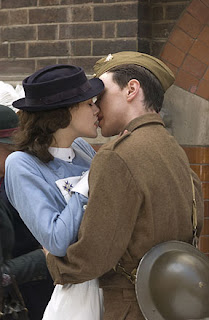 Another word of warning: the sparks fly between Keira Knightley and James McAvoy. I mean, they really fly and you need to remember that if romance is done right, it's almost always better in a movie than it is in real life. So, if you're woman and you're in a relationship and you think it's happy and loving, well, at some point after you see this film, you're going to wonder why your man isn't more James McAvoy-ish.

Just remember, even James McAvoy isn't like his character, Robbie Turner, in real life. So, try to be happy you actually do have love because not everyone does.

And if you're in a relationship and it's not going so hot, chances are that after seeing "Atonement" you will thoroughly hate your significant other and quite possibly decide that you need to end things. You're going to wonder why you don't have someone looking at you like that, kissing you like that, longing for you like that. And it's going to depress you and piss you off.

Anyway, in the spirit of awards, I've been awarded a couple, each from bloggers that I respect immensely. The first is the "A Roar For Powerful Words" award from Heart in 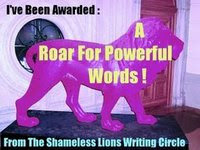 San Francisco over at Guilty With an Explanation. Heart is one of my favorite bloggers and one of the ones I've been reading the longest. I was really grateful on the day that "next blog" button led me to her.

I'm going to pass this award along to Shelly at Boring Black Chick. She is, of course, incredibly interesting and reflective, all which serves to make the title of her blog highly ironic. Every time I read her blog, something resonates with me...and she's a much healthier eater than I am. I wish I could switch places with her for a day so she could train my body to not be interested in either Coke Zero or chocolate.

Ian over at Or So I Thought has also bestowed upon me the "You Make My Day" award. This is very generous of him and if I could give it back to him, I would. But that probably violates some sort of rule book.

I also think I'm supposed to give this to ten people, but this awards show is already running long, sooo....we have two awardees:

I'm giving this award to Keith over at African American Dad. He's proof that, despite the things we're taught by the mainstream media, there are black fathers that married to the woman they love and are actively raising their child. I love reading about his adventures with his son.

I'm also giving it to Sally over at Any Given Sundry. I've been reading Sally's blog for a long time and I love it. She lives here in Southern California and she takes a picture every day. This would be painful if she were a boring photographer, but clearly, that's not the case. She's also a fantastic writer so she provides some commentary and context about the photo. I love this because even though we've never met, I feel like I truly know her.

Well, that's the end of tonight's awards! I'd really like to see Johnny Depp on stage at the Oscars instead of a photograph of him on my TV screen with Billy Bush saying something inane. Let's all hope the studios end the greedy stonewalling and agree to pay the writers what is rightfully theirs.
Email Post
Labels: atonement awards blogging johnny depp keira knightley

Jameil said…
SIGH. there is really no point w/o the globes clothes. i can't stand awards shows. i only watch the red carpet post mortems. i read who won online.
2:54 AM, January 14, 2008

Liz Dwyer said…
Jameil,
Maybe this year will change the way we do awards shows forever? I did miss the clothes, but I'm sure some of the stars enjoyed just being able to stay at home in their PJs.
5:48 AM, January 14, 2008

Anonymous said…
Thanks for posting those links. Susan is on my blogroll, but the others are new to me. I especially love the photos (can't remember her name) - you're right - her blog is great!

Liz Dwyer said…
Jali,
I totally agree that Sally's blog is awesome. She really has an eye for beauty and a knack for writing descriptively and emotively.

And BEARS...next year, I hope!

NYC/CR,
Thank you! None of it would be possible without Depeche Mode, my constant writing companion! ;0

I really wish the studios would just cut the corporate greed. They're making plenty of money, and if they don't think so, they could just stop making crap movies like "27 Dresses" or "First Sunday"
8:19 AM, January 14, 2008

heartinsanfrancisco said…
Liz, thank you so much for saying such nice things about me. Right back atcha, Babe.

I didn't see the awards but would love to see Johnny Depp doing just about anything. Nor have I seen "Atonement" yet, but I will soon. With plenty of tissues and also some fears for my marriage after your warnings.

Finally, it's obscene that the writers, without whom nothing would happen, don't get paid what they should, and while I miss being able to enjoy their work, I totally support their strike. We all should.
12:18 PM, January 14, 2008

Jen said…
Congrats on the awards, Liz! You absolutely deserve them.

And I agree with the last line about the writers, too.

Open Grove Claudia said…
Hurray for awards! You so deserve them! And your choices are wonderful! :)

Toni Campbell said…
I was just going to have the show playing in the background while I read my book. Then Billy Bush came on the screen and I changed my mind.
2:40 PM, January 14, 2008

Liz Dwyer said…
Heart,
Well, I can only say those things since I mean them! ;0

Definitely take the tissues to the movie. I only had one and it was useless by the end so I had nothing to do but sob into my sleeve. But I always cry in movies so it could just be me.

And I think someone should do a study about how a couple's happiness is influenced by seeing movies like "Atonement". Hollywood does sell a fantasy but they make it look so good.

I support the writers 100% and think they should go as long as they need to.

You have me thinking I should contact Johnny and ask him if he wants to come over dinner on Oscar night! Given the inability of the studios to pay folks what they're worth, he might available!

Claudia,
Hope you have some fun checking out the other bloggers. Oh yeah, Al Michaels can ruin any sporting event. He's the sports world equivalent of Billy Bush.

1969,
I think my husband might fight me for Johnny too! LOL! Everybody loves him these days. I would have loved to see whatever unique outfit he came up with on the red carpet/on stage.

Toni,
So what'd you do? Did you shut it off? That Van Helsing movie was on so I kept flipping back and forth, particularly at the parts that were just really asinine.
4:03 PM, January 14, 2008

SheWhoLives said…
Thanks so much for the love, Liz! Your (and everyone else in my blogging family's) appreciation of my efforts means alot, I swear.

And I totally agree with you about the Golden Globes - how dry and rubbish was what they ended up doing? And I too am GUTTED that we missed the chance to see Johnny Depp pick an award. That man...phew *swoon*
5:16 PM, January 14, 2008

Liz Dwyer said…
Shelly,
I enjoy coming over to visit so keep it up...lol, I'm so selfish!

The Globes were horrendous. At least show b-roll of stars at their movie premiere--or something.

Sundry said…
Thanks so much, Liz. Gee, just the fact that you read my blog with any kind of regularity gives me hope that it occasionally means something. And now an award! Too much!

Especially since your comments on Atonement absolutely smoked my pallid review. I think the movie actually makes the same point you do, about the possibilities of fictional lives.

Keith said…
I'd like to thank the academy and the little people, ok my little person, for this honor. And a special thanks to Liz for taking the time to...

Liz Dwyer said…
Sundry,
You could get a very slinky camera bag at some swagtastic VIP party. We'll all say we "read" you when!

Lola Gets said…
I saw Atonement on Monday, and I LOVED it! Wrote a post about it too, lol. I thought the movie was hot. But, hey, thats just me, lol.