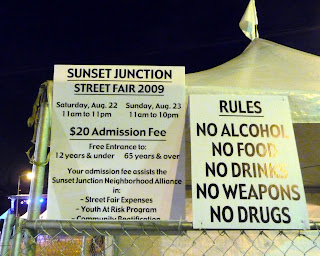 I've been trying to find a less crass word to describe just how disappointing this year's Sunset Junction Street Fair was. But I can't. So I'll just say it: It sucked.

This fair was one of the first cultural events I attended when I moved to LA 11 years ago. I remember the incredible diversity of people dancing in the street to everything from club music to reggae, eating everything from chicken kabob to pupusas.

There'd be the tattooed up Latina goth girls strolling down the street next to brothas with gorgeous locs flowing down their backs.

Blond hipster chic types got winked at by neighborhood skaters. Sometimes they winked back.

Moms pushed their kids in strollers next to the gay guys with nipple piercings and leather bondage gear. Both would exchange looks as if to say, "Mmmkaay, whatever floats your boat!" and then they'd each go back to sipping their strawberry lemonade.

The fair used to be bumping all day Saturday and all day Sunday till everything closed down at 10 p.m. on Sunday night. It used to be so busy that six blocks away you'd see streams of people walking through the hills leading down to Sunset Boulevard.

Sure you had to pay an arm and a leg for your falafel sandwich, or that pack of incense that smelled like heaven, or that cool silver and turquoise ring that looked perfect on your hand. But there was no admission charge, so whatever you decided to buy was up to you.

Over the years, "free" morphed into a "donation". And then by 2006, they were charging $12-15 mandatory admission. This was really a slap in the face because Sunset Blvd is a public street and the workers at the gates would say that no, I could not go hang out in one of the cafes or shops down on Sunset unless I paid the admission fee.

Last year the price went up to a mandatory $20 and I skipped Sunset Junction for the first time since I moved to Los Angeles. Maybe my Chicago roots were showing because Taste of Chicago, which is like a million times bigger, is free to get in. You only have to pay for food and drink tickets.

A lot of other folks in this neighborhood have been downright livid over the fair. We have yet to see where the money supposedly raised from the fair benefits anybody around here. But, the organizers made nice with both the City Council and some formerly opposing neighborhood groups, and $20 to get in was once more the order of the day.

I'd read that if you live in the immediate vicinity, you were supposed to be able to get in for free, but the people at the gate 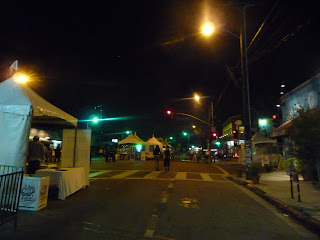 were NOT voluntarily telling people that and I had to argue with them to let me in.

The crowds clearly went elsewhere. You see how empty that looks? That's 8 p.m.

In previous years, 8 p.m. meant you were still elbowing your way through the crowd.

I felt sorry for the DJ at the corner of Hyperion and Sunset. He was playing an excellent set but the only people out there dancing were me and my kids!

Dozens of LAPD officers stood around looking completely bored out of their minds. Whatever crowds they'd thought they were going to have to monitor just hadn't materialized.

Vendors were practically begging us to come buy something from them.

No thanks. Nothing seemed appetizing or, for that matter, interesting enough to buy. Instead, we meandered down to one of the stages where '90s hip-hop act, Arrested Development was playing to a smallish crowd that didn't seem to really know any of their songs.

That's when it hit me. The fair doesn't just suck because it costs $20. Nope, it sucks because of who can afford to pay $20 in this sort of economy. A lot of the cool artists, creative young teenagers and adults that used to frequent Sunset Junction just don't have $20 to spend on a street fair.

How boring to have relatively well off pseudo-hipsters milling around looking like they need to be entertained.

How boring to overhear Westsiders saying, "Yeah, I only come over here to this part of town a couple times of year." 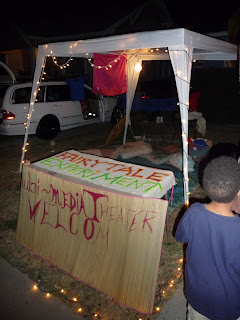 Great. Thanks for slumming over here on the so-called "eastside".

I developed a new appreciation for some of my neighbors who boycotted Sunset Junction because it's turned into a mockery of it's former self. These folks set up some FREE performance art in their front yard. Free fairy tales for kids and adults.

Instead of being inside the $20 gates, the kind of creativity and community that I'd remembered from the Sunset Junction's of yesteryear was outside, two blocks away.

Lenina said…
This saddens me. Yet another example of wanting to make money from everything. The fair seems like the open markets we have here. We sell silver jewelry every December at nights, and they also sell toys, clothes, food, hot fruit punch (great when it's cold) and other cool stuff.

This city, even though it's HUGE, doesn't seem to display so much diversity. I call it the big neighborhood. We're pretty much an homogeneous bunch of people.

But I agree if they start charging people just for taking a look, nobody would show up either! That's plain crazy with this economy.
7:20 PM, August 25, 2009

Liz Dwyer said…
Lenina,
Charging people is just an insanely bad idea, period. But your open markets sound marvelous, especially the silver jewelry and the hot fruit punch (and here I was thinking strawberry lemonade was as good as it gets!)
1:26 AM, August 26, 2009

nick said…
Sounds like another story of something spontaneous and diverse and creative turning into a commercial machine that just sucks all the life out of it until everyone deserts. Very sad.

Btw, we had a Belfast Taste and Music Festival recently (no charge to get in!) and there were loads of Chicago chefs providing great food. I hope they return next year.
4:06 AM, August 26, 2009

Lucrecer said…
Well, that just stinks. Sorry to hear that the charging of money has ruined such a wonderful event. Maybe this year they will see how messed up that really is and ditch the fee.
5:29 AM, August 26, 2009

Daniel said…
Los Angelista,
Oh, that does suck! Nothing like crass greed and stupid commercialism to ruin about everything in life. It is also why I go for the low-budget (usually no-budget, lol).
Reminds me of the “Health Fair” I went to while in LA a year ago. It was at the Ted Watkins County Park. Yep, I was there. 103rd and Central.
The MLK Hospital/Ambulatory group had a youth group there that is involved in the medical schooling program run from the health facilities doing health checks and tracking the data as part of the mini-fair, their class-work and to provide some specifics on nationhood health. So, what’d I do? Why I signed up of course! They checked me over, drew blood, filled out questionnaires and all. We got to laughing how I was going to royally screw up all the tracking data, as this one person totally out of the “norm” shows up in the numbers – White, runner-guy type, lol! The kids thought it was really cool.
Funny, Los Angelista. You get out into the world, go where people tell you “you shouldn’t”, you’ll experience things so different than the stereotypical views held by so many.
11:24 AM, August 26, 2009

Liz Dwyer said…
Nick,
Ooh, you all had some Chicago chefs so no wonder it was jam-packed. 10 quid still isn't as bad as $20!

I read accounts on-line of folks spending $5 for funnel cakes at Sunset Junction. Just ridiculous! How can you even enjoy a funnel cake if it's $5?

Lucrecer,
I hope they will, but they didn't get it last year so I'm not holding my breath.

Kendra,
It is a bummer, isn't it? I have really fond memories of Sunset Junction. I wonder if it can change back to the way it used to be?

Daniel,
I know that park very well! I think it's great that you were there to participate in their study. Maybe give them a little something to think about as far as who's in what neighborhood!

Anonymous said…
Oh, that's so sad! Ridiculous entry fee. Elitist BS. I am not in the mood for exclusionary tactics these days. Sigh.
3:12 PM, August 26, 2009

Rachel said…
This was wonderful.
I'm saddened by the loss and greediness, yet the beauty of your words and observations...
I love the way you fell in love again with your neighborhood and the people there.

nick said…
I'd never heard of funnel cake, had to look it up. "Funnel cakes are made by pouring batter through a funnel into hot oil in a circular pattern and deep frying it until golden-brown. They are often served with powdered sugar, jam, or other toppings." Sounds fabulous, I wonder why they've never made it to the UK?
1:00 AM, August 27, 2009

Anonymous said…
Great breakdown of a once-excellent local party ruined by greed, primarily Michael McKinney, or whatever the dude's name is. Tsunami cafe's nasty, basement-dwelling impressario who profits mightily from Sunset Junction MIGHT have learned his lesson this year.
Local artists should be given FREE booths to show and sell their work/crafts in exchange for their mighty and supernatural flavor, the creative energy that west siders siphon off 'once or twice a year'.
Boycotting is the right move so long as mandatory entrance fees are in place.
Other problems: WAY too many cops, fewer rides, insanely overpriced booze and food lead to enough is too much. Americans get the opportunity for a real vote every time they drop a dollar.
Silver Lake residents - like the guys at the furniture store lot on Santa Monica are doing - should create a new, more inclusive fest of their own and NEVER publicize it.
Sunset Junction RIP
11:34 AM, August 27, 2009

theprisonerswife said…
wow, i've lived in LA my whole life & have NEVER heard of this!