Back in June I schlepped over to Beverly Hills to see my fancy-schmancy dentist for my checkup. I got my teeth cleaned, got the "You Have No Cavities Cuz You're Just So AWESOME And You Floss" gold star, and then I asked, "Do you think Invisalign will work for me?" 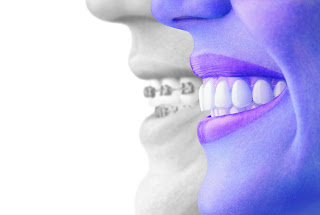 In case you don't know, Invisalign is the clear, non-metal option for tooth straightening. One of the mouths in this picture has Invisalign and the other has the typical train tracks.

I never got braces as a teen because, well, when your parents are paying for drug rehab for your brother, braces just aren't in the cards. Besides, my teeth are pretty straight on top where it counts for photos.

Unfortunately, they're kinda jacked up on the bottom. I've been teased because of their crookedness. Even in my early twenties I was called names like "Snaggle Tooth". Nowadays I don't care about the teasing, but I bite the inside of my mouth a LOT and it's hard to floss because my teeth are smashed so close together.

Unfortunately, my dentist said, "No,"to Invisalign for me. She told me my teeth are too crooked and I'd have to get train-track braces. Me no likey the train tracks. (Does anybody like those things?)

Now I'm re-thinking my dentist's answer because on Saturday I went to an Invisalign mom blogger information event. They were primarily talking about Invisalign for teenagers, but the info I heard applies to anyone interested in the product.

I met Sheila Tan, VP of Marketing for Align Technologies (that's the company that makes Invisalign) . I liked Sheila a lot because the info she shared was research and fact based, not just marketing spin. She also told me about a program the company does where they give Invisalign to low-income teens so I really liked that.

Dr. Jasmine Gorton of Marin Orthodontics -- She's a Harvard educated dentist who's super no-nonsense and clearly knows her stuff -- made a point of telling us that Invisalign hadn't paid her a dime to come talk to us. Not even gas money. Dr. Gorton came because she really believes in being on the cutting edge of orthodontics. Some of her teen patients and their parents came as well.

Here's a bit of what I learned:

Teen Self Esteem: Research shows that 50% of teens smile less with metal braces. My 13 year-old nephew has braces and I thought he wasn't smiling because he's trying to be cool. I feel bad that I hadn't even thought about the connection to his braces! The good thing about Invisalign? These smiling/esteem problems don't exist because the aligners are invisible.

Cost: I'd heard Invisalign is twice as expensive, not covered by insurance and it's only something vain, rich people get. However, I learned that Invisalign can be about the same cost (or a little more) as metal braces (but it pays to shop around price-wise). I also learned that most dental insurance covers part of the cost. As far as the vain and rich thing, the company realized that was their image and they're trying to change that.

It Works For Lots of Cases: I'd heard, like I was told, that if your teeth aren't almost straight in the first place, Invisalign won't work for you. Not true. Dentists, like a lot of folks, promote what they are most comfortable doing. A dentist may not have done many Invisalign cases, so they may be saying you or your kid can only get wire braces because that's what's most convenient for THEM. You can also do combos of metal/Invisalign depending on the severity of your case. If a dentist tells you no, get a second opinion to be sure.

Pain: I don't know first-hand about the pain that metal braces cause but I've heard it's bad. With Invisalign there's only a bit of discomfort when you get new aligners and then you're fine.

Hygiene: You can take Invisalign off to eat, brush & floss. No having food stuck in your wires. No grimy plaque build-up around the metal tracks -- which is gross but hey, just keeping it real.

Less Office Visits: You only have to go to the dentist every six weeks to get new aligners. If you are a really responsible patient, a doctor can give you the aligners for your entire treatment period and you don't have to come back. How nice to not have to get off work or pull your kid out of school every couple of weeks for dental visits -- especially if you live in LA with our super light traffic. (Do you hear the sarcasm???)

Along with learning Invisalign info, I also got to hear a presentation on teen attitudes from 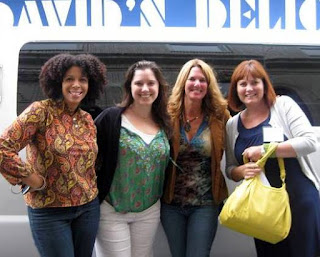 Michael Wood, a Senior VP at TRU, and I schmoozed with some of my fellow SoCal bloggers. Marcy from The Glamourous Life Association (on the right) even won an Invisalign treatment!

I'm jealous happy Marcy won because she's really nice and, well, it's good karma to be happy for people when something good happens to them.

So will I end up getting Invisalign for myself? I don't know. We'll see. But for my boys? If they can wear clear Invisalign for a year without all the drama and pain of metal, with less doctor visits and about the same cost, well that makes sense to me.

But I happen to like technology that has the potential to make our lives better and I hope orthodontics moves more towards these kinds of clear treatments. I really wonder why it is that even though we have the ability to eliminate most of the drama associated with metal braces, we're still using them as the default instead of the exception?
Email Post
Labels: Beverly Hills dentists Invisalign Los Angeles mommy bloggers Teenagers teens teeth

Lola Gets said…
Call me strange, but I really wanted braces when I was younger. I thought they were cool. The same with glasses. Yeah, Im strange.

Jameil said…
umm... i would totally like invisalign. i had the train tracks and WOW pain. my teeth have shifted back (not all the way but plenty) and got really extreme after i got my wisdom teeth removed.
11:12 PM, August 24, 2009

Liz Dwyer said…
Elizabeth,
Wish you could've come. It was very fun and much more informative than I expected.

Lola,
For real? You really wanted the train track braces? I guess I can understand that because some braces is better than no braces!

Jameil,
Yep, they talked about how a lot of adults have had old school braces but they didn't wear a retainer or their teeth shifted. Sometimes those cases can wear the aligners for less than a year, but I can't remember if you have to wear a retainer after that or if they have something else they do.
11:20 PM, August 24, 2009

unfinished-story said…
I agree with Lola Gets. I was almost jealous of the mangled-fanged bats at my school. I think braces and glasses are sexy.