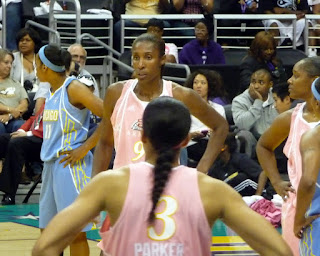 Last night I went to my first-ever WNBA game, a match-up between the Los Angeles Sparks and the Chicago Sky.

Even as I walked into Staples Center with my family, I wasn't 100% sure which team I was going to root for. The old hometown or the new hometown?

The new hometown team won the coin toss, mostly because I was absolutely star struck by Lisa Leslie! What an incredible athlete! When she's feeling it, she's really on fire and just scores shot after shot. No wonder she has four Olympic Gold Medals!

The Sparks are wearing pink uniforms because last night was Breast Health Awareness night. Everybody got a free t-shirt and during time out and quarter changes, folks who are engaged in the fight against breast cancer were introduced to the crowd.

I had a great time but my two sons absolutely loved the game. They danced in their seats when the Sparks scored and cheered like crazy, chanting, "Go Lisa, Go!"

Because I'm social like that, I got to talking with some of the people sitting around us. Many of them were women with season tickets and they knew each other well from sitting together all season.

They complained about unfair officiating and talked game statistics just like any other sports lovers. The lady next to me even pointed out Lisa Leslie's mom to me and told me how she thinks kids nowadays take women's sports for granted. That's probably true. Even though the WNBA has only been around since 1996, kids nowadays think having gender equality in professional sports is normal.

I really like that my sons are growing up believing that it's OK for women to be strong and athletic. In fact, to them, athletic women are to be admired, as you can see from this interview with my eldest:


We had some celebrity sightings as well. Actress Regina King was there. She's wearing white and standing right in front of 6'5" Lisa Leslie. 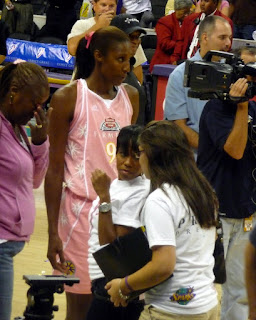 We also saw Deebo there. I had to look up the guy's actual name, Tom Lister, Jr., but he'll always be Deebo from the movie Friday to me. I'll admit, even though he was standing pretty close to me, I was too scared to snap a picture of him!

The Chicago Sky were in the lead most of the game, but they just couldn't hang on and the Sparks won, 75-63. When all the streamers and confetti dropped out of the Staples Center ceiling, my boys went bananas. They then decided to try to collect as many streamers as they could... and then they wrapped themselves in them. 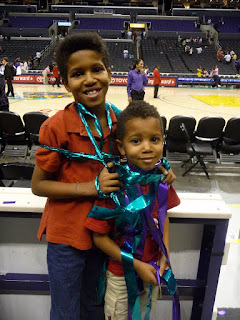 I did a little digging online and found out that there are some deals to be had for WNBA tickets. This site has deals/promo codes for every WNBA team, not just the Sparks.

Even though their season is almost over, if you can catch a game, you should. Next season I'll definitely be back to support women's sports and root for the Sparks again!
Email Post
Labels: Boys Family gender equality kids Los Angeles sports WNBA women

Unknown said…
I love their pink uniforms. Kudos for taking your boys. Seeing you do the marathon now watching the WNBA, there will be no doubt in their minds about the strength and power of a woman.
5:40 PM, August 26, 2009

Liz Dwyer said…
Ms. Wooden Shoes
I am so glad that I can show my sons first-hand what women can achieve and accomplish. I want them to have no doubt about the full equality of men and women -- and I like that they're seeing that equality does not have to mean sameness. I like that the ladies can wear pink uniforms and pony tails!
7:52 PM, August 26, 2009

Sundry said…
We went a few years ago and really loved it. The smaller venue makes it easier to connect with the players. We had favorites before we left at the end of the evening.
9:52 AM, August 27, 2009

April said…
I was just as enamored and enthusiastic as you when we went a few weeks ago. Sylvia's going to be taking a clinic with the SparKids this weekend, and she'll get to perform at half-time at next Tuesday's game. We're excited we get to go to another game before Leslie's retirement!
1:22 PM, August 27, 2009

John William said…
Its very nice of you for sharing the information. It is really incredible to have online coupon codes for saving money just by sitting at home. I saved a lot with promo codes at deals365.us
10:21 PM, September 04, 2009