Back To School With Disneyland

I learned several things this past Sunday.

1) If traffic is moving and you, ahem, don't drive like a turtle, it is possible to get from the Hollywood area to Disneyland in 24 minutes.
2) Only at Disneyland can you be outside for hours in 98 degree weather and still have a fabulous time.
3) Eating ice cream is a totally guilt-free experience when you're really hot and at Disneyland.
4) If you take your kids to Disneyland you'll hear, "You're the BEST MOM EVER," a whole lot! 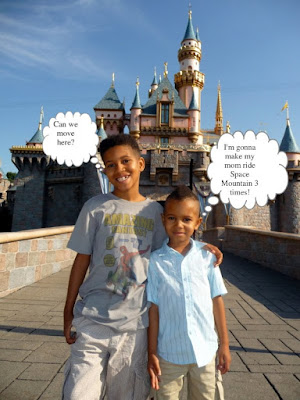 Let me add #5 as a PSA for all you moms with toddlers: Do NOT wear a halter top and no bra to Disneyland because your child will pull the top down and you'll end up giving my sons (and a whole lot of other people) a great look at your goods.

All "goods" aside... We were invited to the Happiest Place on Earth for a fun event called School Year's Eve. It's a new back to school celebration jointly developed by the National PTA and Cookie magazine.

The thinking is that whether you celebrate at Disneyland or in your own home, it's really important to get your kids mentally excited for the start of the new school year. It's like having a pep rally before a big game -- much needed since some kids (like my eldest) have lots of fears and worries about a new school year.

The Disneyland celebration had all the Toontown characters like Mickey Mouse and Donald Duck dancing around and pumping up the kids about how awesome they were going to do. My boys were so into it and were totally waving their flags and cheering for Mickey.

I also got to re-live my "90210" watching days because actress Jennie Garth was the honorary mistress of ceremonies. She came with her three children and talked about the importance of encouraging kids and starting the school year positively.

I would've loved to get a picture with her but right at the end of the celebration after they had an apple ball drop (totally like New Year's Eve), my youngest got a splinter in his finger from the stick his flag was on. The poor baby was crying and in a lot of pain but the Disneyland staff were so super nice, helping get the splinter out, getting us band-aids and even offering to walk us to the first aid station.

Post splinter-gate, we set out to explore the rest of the park. We rode almost all the rides, including Space Mountain three times -- wow, I know I'm old because that's as much roller coaster as I can take these days! My sons also loved participating the Jedi Training Academy. I'll confess, I wouldn't mind being picked as a padawan learner... I want to get up on stage and battle Darth Vader, too!

As the afternoon heat crept up, I found a shady bench where I sat down to eat ice cream and watch the "Celebrate" street parade. It was really diverse cast doing High School Musical style dancing and singing so my boys loved it. I did feel sorry for the performers because their costumes were positively dripping with sweat. I'm surprised none of them keeled over from heat stroke!

We didn't stay for the evening fireworks because we decided to head back to LA at around 6 pm so we could see some family friends visiting from Phoenix. We drove straight from Anaheim to Santa Monica Beach and wow, it was probably 20 degrees cooler at the beach. My boys threw themselves into the water fully clothed.

We stayed till well past the moment when the sun dipped below the Pacific's horizon.

As we drove home, I couldn't help but smile as my sons chatted in the back seat about how much fun they'd had. Both of them agreed it had been the best day ever. Even with the unbearable heat, I absolutely agree!
Email Post
Labels: back to school Beaches Disneyland ice cream kids moms santa monica star wars

Liz Dwyer said…
Jen,
Absolutely a priceless day. It's so strange to think that in only a few years my eldest will be a teenager. It goes so quickly!
4:04 PM, September 01, 2009

Kristen Howerton said…
We just went to Disney and saw that street parade, and I had the same thoughts about the sweatiness of the dancers! Some of them were having to wipe it out of their eyes. Ewww. But my kids LOVED it. :)
12:17 AM, September 03, 2009