I Did NOT Faint During The Depeche Mode Concert, But...

I did not expect to cry as much as I did during tonight's Depeche Mode show, but the minute the band walked out on stage, there the tears were, welling up in my eyes. 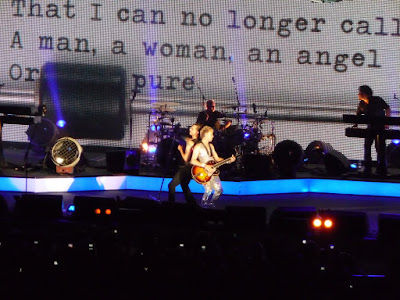 I suppose the tears are partly because as I get older, I'm more aware of my own mortality, and thus of the mortality of those I love... and of the band I love more than any other.

Dave Gahan, the lead singer of Depeche Mode, has had quite a few health issues this tour: bladder cancer tumor removed, torn calf muscle, and the last two shows before tonight's show (San Diego and San Francisco) were canceled due to his needing vocal rest. I'd mentally prepared myself for the possibility that this show wouldn't go forward. And I was OK with that. The most important thing is that the band members are healthy, not that I'm entertained.

During the opening act, Peter Bjorn and John, I ate my sandwich (yes you can bring food to the Hollywood Bowl) and chatted with other fans around me. We swapped stories of how many times we've seen the band, our favorite songs, and how worried we were about Dave's health. -- OK, not everybody was talking about that. The two ladies to my right mostly told me stuff like, "We already drank two bottles of wine before we got here! We're ready to party!"

Indeed, as the time for Depeche Mode to take the stage neared, the entire atmosphere at the Hollywood Bowl was like one giant party. -- so when the band came on stage and I started crying, it really caught me off guard.

I was just reading through my twitter feed -- because you know I had to document my experience, and wow, I cried during, ahem, eight songs. 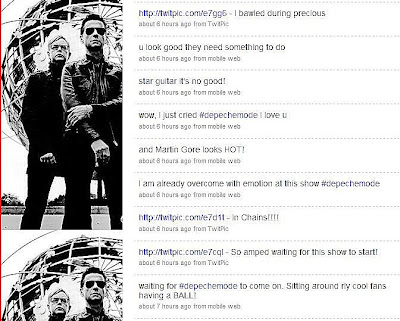 I don't cry because the songs are depressing -- and in fact, I have NEVER found Depeche Mode to be depressing. Instead, I find myself deeply touched emotionally during many of their songs. And Depeche Mode is the sort of band that takes things to an entirely next level live, so if one of their songs is really touching when you're listening to it on an iPod, you're gonna feel it in your gut, your soul, when you hear it live.

Plus, these are songs (Somebody, Home, Precious, Strangelove, Come Back, Stripped, Never Let Me Down Again and Waiting For The Night) that connect with various times in my life. Very specific emotions and memories cause the tears to well up for me every time I hear these songs. 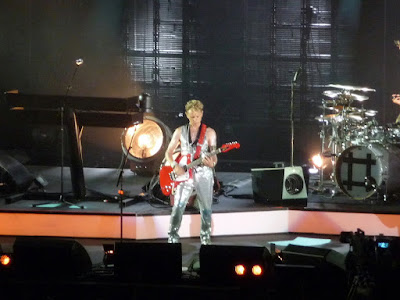 I was not the only one incredibly affected by the show. One of the girls next to me got so physically and emotionally caught up in the performance of "Fly On the Windscreen", she lost her shoe!

In case you think it was all tears, there was lots of dancing going on during the show. Usually, LA crowds can be a little too cool for school, but folks were really letting loose around where I was sitting. The word "bonkers" comes to mind. And um, I'll fess up and include myself in that.

At one point, I was dancing during "Enjoy The Silence" and Never Let Me Down Again" with two other ladies, with, cough, glowsticks, and some random guy who was just walking along the walkway in front of us stopped to jam with us. He was so hyped up, at the end of the song he kissed me on the cheek! It was very sweet and I felt no need to smack him or anything like that. But, next thing I know, he's chatting up the two ladies and, well, he cozied up with them for the rest of the show. Let's just say there was some serious hooking up going on during "Strangelove"!

Speaking of "Strangelove" -- remember how two days ago I said I might faint during its performance since tonight was going to be the first time I'd ever heard it live because it hasn't been played here in the States for 20 years? Well, I didn't faint, thank goodness. But if "bonkers" came to mind before, let's just keep the letter "B" but turn the rest into "batshit crazy", okay? And that's all you need to know about that.

So how did they sound? Amazing. Here's a bit of "Personal Jesus" taken with my digital camera so the visual is just so-so -- and sorry, but I had to stop filming because I was dancing and so the camera couldn't focus.

The final song of the concert, "Waiting For The Night" was especially beautiful... and on the far right side of the stage, on Fletch's side, almost off-stage but not quite, I could see a child spinning and dancing to the music. From the age and size I figured it had to be one of Martin Gore's children. And if I hadn't already had tears rolling down my cheeks because of the gorgeous emotion of the song, that would've done it right there.

There was something so sweet and innocent about that child dancing, and it made me think about how yes, the members of Depeche Mode are far wealthier than I will probably ever be, but they give up so much time with their families in order to put together a record and then tour to support it. I am so grateful that they keep performing, and that they so obviously pour their hearts and souls into it all.

It's hard to believe Depeche Mode has been a part of my life since I was eleven...And in 14 hours and 50 minutes, I'M GOING TO SEE THEM AGAIN!!!
Email Post
Labels: cancer Depeche Mode Hollywood Bowl Los Angeles Love my favorite things tears

1969 said…
I know you had a ball! SO glad you were able to go and even happier that you are going AGAIN. LOL

These precious boys are .. welll precious and come from a place where beauty, truth and sincerity is key.

They are the best thing that has happened to humanity in recent times and the only thing that is important is that thay take the best care of themselves.

Kim Tracy Prince said…
I really love this post because you reveal (as if we couldn't tell already) what a nut-case fan you are of this band, and in doing so you show us incredible passion with which I can completely identify. Music really does that to me, too. Love it.
12:57 PM, August 17, 2009

Dave's Michele said…
Sooo glad you had an amazing time! I am feeling every word you said and hope tonight will be a repeat. Have fun, Liz and I look forward to seeing your tweets and blog :D
1:25 PM, August 17, 2009

Liz Dwyer said…
Nerd Girl,
Yes, two more to go! You know, it's true, I have never walked away from one of their shows thinking, "Wow, that was absolutely terrible!" I think even at their worst they'd probably be better than 99% of the other bands out there!

1969,
I sure did have a ball! You KNOW if I was waving glowsticks at one point I was really clowning! (But if anybody asks, I was just holding on to the glowsticks for those girls because they were kinda trashed!)

Stellanova,
They are absolutely precious. I always walk away from their shows in AWE!

Kim,
LOL! I'm remembering how at the first LA Moms Blog party at Jessica's house I totally rolled up in a Depeche Mode t-shirt, because to me that's normal! Maybe I am kinda a nut job! :)

House,
Oh I definitely will share the next one! Only 5 hours and 20 minutes till the show starts!!! Whoo hoo!

Michele,
You know what's extra cool? That I got to experience the show with nice, sincere and down-to-earth fans like you! I really love how other fans make the experience that much more amazing.
2:12 PM, August 17, 2009

DM is Lendendary. Stuff that dreams are made of. Humans and semi-gods.﻿ They lift everything to a higher level.. Can you feeeeeeel the looove.

Dave and Marty - larger-than-life and may every day in the rest of their lives be as beautiful and as joyous as the love and beauty they have brought to the masses...
3:06 PM, August 17, 2009

Jen said…
It sounds like a wonderful experience for you. They seemed to really be rocking despite the "mortality" issues.
5:27 PM, August 17, 2009

Phi Sister said…
I went to Virgin Megastore at Downtown Disney a few months back and this song had come on the overhead. If it wasn't for your blog, I don't think I would have automatically thought Depeche Mode, but thank God I did. There was something so amazing about this song, and while I haven't bought sounds of the universe, I LOVE listening to Miles Away (The Truth Is). One of the best releases this year!
1:56 PM, August 18, 2009