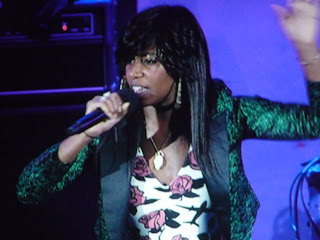 It's officially summer and my kids are wearing me out! We leave for Chicagoland in one week and I can not WAIT to let them loose on all my people out that way.

In the meantime, I'm endeavoring to get a little fun in before I leave Los Angeles and head to the land of my birth. Our local NPR station, KCRW, helped me out with this because I won a giveaway they had for tickets to Sunday night's show at the Hollywood Bowl. On the bill? The phenomenal Raphael Saadiq, talented as I don't know what Santigold and the Afro-Beat king himself, Femi Kuti. Is that a phenomenal and eclectic line up or what?

I loved all three performances but my absolute fave was Santigold. She positively KILLED it! Here's a little clip of her performing "Find A Way". I would post the clip I filmed, but I screamed through most of it so, um... I'll spare y'all the sound of me hollering, "WHOOO YEAAHH! GO GURL!!!"

Yup, I think I want to be Santigold now... or at least test drive her life for a little while. 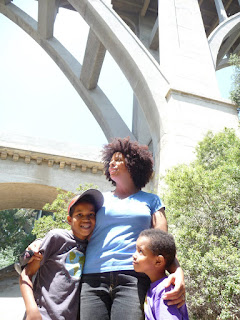 In pursuit of more fun, and since yesterday was the first day of summer vacation, I picked up some snacks from Trader Joe's and took la famille up to Pasadena for a little hike in the Arroyo Seco. Here we are underneath the Colorado Street Bridge. It was gorgeous and we even saw gold dust in the stream. Apparently there's an old gold mine further north in the mountains -- and wow, now I know how the 49ers got gold fever. If I'd been able to pick those glittering flecks out of the stream sediment, you know I would've!

Instead we listened to the water gurgle across the rocks, ate grapes and brownies, and jumped at every rustle in the bushes. I'm all for sticking to the trail and not meeting up with any coyotes or, ahem, mountain lions or bears. I know it's "only" Pasadena, but I fully believe these animals can and will come out of hiding to eat me, or, er, eat the brownies!

Today was all about spending hours at the park, trying to wear these kids out. But I think they wore me out instead. I told them to take a nap, just so I'd have an excuse to take a nap! But no one ended up going to sleep.

I'm not complaining too much though. Every moment I get to spend with my boys is a treasure. It certainly won't always be like this.
Email Post
Labels: Family KCRW kids Los Angeles Music Santigold summer Vacation

Lotus Flower said…
Your sons are too adorable! Keep rocking that 'do.

Lucky you get to go back to Chi Town. I was going to go up there in July for vacation but we're heading south for Myrtle Beach instead. Too crowded, I guess.

Santigold actually sounds alright live and I usually don't say that about a lot of "studio" musicians, lol. Raphael Saadiq will always be my favorite music mogul. He and Mary J need to make more music together.
10:11 PM, June 23, 2009

Liz Dwyer said…
Jameil,
Oh it was a lovely day! Absolutely. The boys wanted to go up there again but I'm going to wait to pull that out of my pocket in August when I come back!

Mimi,
Ooh, I want to go to Myrtle Beach! I've never been but I've heard it's beautiful.

Santigold sounded REALLY good live. I was impressed by the vocals and her whole vibe. I always love seeing women entertainers who aren't portraying a "singing hooker" image. I wasn't expecting her to rock the house as much as she did. But by the end of her set, the whole place was on their feet!
11:30 PM, June 23, 2009

Michele said…
I kept seeing your twitpics of the Arroyo Seco hike and kept thinking, "Why didn't I ever do that when I lived in Pasadena - for 5 years?!?!" As I sit here in Phoenix, I'm kicking myself and totally missing Pasadena. Thanks for sharing that!
5:43 AM, June 24, 2009

1969 said…
What a great day. I went walking on a trail yesterday evening not too far from my house. It was so peaceful.

Liz Dwyer said…
Michele,
You'll have to hit it up on a return visit! It's prettier in January/February because the rain makes everything greener and the streams are much fuller, but it's gorgeous nonetheless!

Jen said…
No, it won't - enjoy those times while you can!

We still get evenings with C at home, though and plenty of family time, so the times you store up now will shore you all up for later.

And enjoy those non-Mommy moments, too!