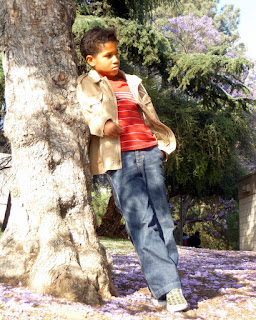 My eight year-old (who really needs to go to bed but it's Friday night so what the heck) just came and harassed me about the same thing he's been harassing me about for the past month.

Other variations of this painful line of questioning also include:

"Do you think I could be an actor?"

"Can I take acting classes?"

"Do you think I should do action or comedy movies?"

"Could I be one of those actors on the Disney channel?"

"I could be a pretty good model, like the ones in those magazines you get, Mommy."

So, my non-commital response has been, "I thought you wanted to be an astronaut or some sort of scientist."

He replies, "Well, yeah, I could do that, too, but I first I wanna be a model or an actor."

"Well, why do you want to do that?" I ask, because I figure it's better to, you know, ask why instead of rattling off all the reasons he might not want to get involved in the "industry". I mean, he did some modeling for American Apparel back when he was almost three and he was great at it, but the people scared me more than a little.

My boy says wants to do this because he likes that actors and models get to travel, dress up in cool clothes and pretend to be a bunch of different characters.

"Johnny Depp gets to get to be Captain Jack Sparrow... and that's so cool, and I could do that too!"

A part of me thinks, well, why not let him have a go at it? And then the sane part of me says that 1) I don't even know where I'd start to get him down that road and 2) that road would be a sure recipe for disaster.

I have a feeling he's gonna harass me all summer about this. What to do, what to do?

In the meantime, I'm going to make my boy go to bed. And me too.
Email Post
Labels: acting johnny depp kids Los Angeles models

Sharifa said…
Wow... The reality series showbiz moms and dads comes to mind and that is so not you. A bit of money for college would be nice but how does one keep from getting sucked in? Good luck with this one!
4:35 AM, June 06, 2009

nick said…
If he's so keen on being an actor or a model, perhaps you should ask him exactly how he aims to do it, when there are already thousands of kids out there with the same ambitions, all competing for that big break. That might give him some food for thought....
5:35 AM, June 06, 2009

nyc/caribbean ragazza said…
Most of the child actors I've met are a mess, not very bright (as they are undereducated) and their parents are crazy stage parents.

If he wants to do school plays and things like that, I think it could be fun and you could see if he has some talent.

Regarding model? Oh hells no. Growing up is tough enough without having to make money based on your looks.
6:46 AM, June 06, 2009

Eve said…
Do you have the time to take him to auditions and get photographs done and all that? If you do, why not indulge a little boy's dream? Maybe nothing will ever come of it, but at least he'll know that you tried.
10:44 AM, June 06, 2009

Malik Akbar said…
I wouldn't discourage him, but maybe you should have some of your friends who are in the business talk to him honestly about exactly what what it's like. It will likely have more of an impact when it's not coming from mom. And talk to him about being a leader in the business, like a director or producer or executive, so that he's aiming to be in a position where he will always have the freedom to realize his own vision and positively influence others.
12:00 PM, June 06, 2009

Liz Dwyer said…
Sharifa,
Oh those psycho stage moms and dads... I could NEVER be like that. Lordy, that would not be alright with me! Can you even imagine? Money for college would definitely be nice, but there are a lot of negatives, too.

Nick,
He's taken some drama classes at school and was highly praised, and, well, there is no telling him that there are thousands of other kids wanting to do it because he absolutely believes he's just as good if not better than them. And, I believe if he wanted to do it, he could. He doesn't have an "I can't do it" bone.

NYC/CR,
Yes, a total mess and there are SO many parasites that it's scary to think about voluntarily getting into that. But, at the same time, I wonder about how normal someone like Raven is compared to Macauley Culkin types, or those awful Full House twins. Sigh.

Eve,
I do have some time, but that may change this Fall. I worry that I'm projecting all the bad things that could happen with it. Yet, acting can also have a nobility and goodness to it, it doesn't have to be ALL slimeballs (does it?) so maybe if he really wants to do it, it would be better to put him in some classes so he gets to do it without having to deal with unscrupulous types.

Malik,
That's a good idea and I absolutely agree with getting him to also consider the other side of the camera. I don't want to squash his artistic side but there is definitely a smart way to go around it.
9:24 PM, June 06, 2009

Jameil said…
i'm not a parent (as you know... lol) but maybe you should let him give it a try. he seems to be a smart kid with a good head on his shoulders. i'm sure if it's as bad as you remember it and as it seemed on tv, he'll recognize the bad people and want to get out before he gets in too far. or maybe he'll be great at it and like sharifa said get some money for school and have fun. it's always nice when you can look back on your childhood and say, "mommy encouraged my dreams but kept me on the right track no matter how crazy they were." ooh that was laying it on thick. lol. that's partly coming from my desire to be a figure skater and my mom wanting no part of it. (those moms are just as crazy if not worse-- it's like pagaent AND soccer mom rolled into one. yowza.)
1:11 PM, June 07, 2009

Liz Dwyer said…
Ingrid,
Uh huh, it is hard! And last night while we were walking home, we passed some folks shooting a film. He was SO curious.

Jameil,
LOL, go on ahead and lay it on thick! Haha!

You mean you could've been an award winning figure skater instead of an about-to-be award winning documentary filmmaker? Yeah, I don't want him to think in the future that he could've done it, except that mommy discouraged him. I need to figure out who to trust, how to get him started down that road.
3:33 PM, June 07, 2009

BZ said…
I'm all for encouraging career exposure to young people so they can decide whether or not it's something they can forsee as a future. (As well as to avoid tens of thousands of dollars on education that they may not care to use after-the-fact, lol.) I like to encourage creativity. At the same time, I totally understand your hesitation. "The industry" is insane. Maybe he could try an acting or modeling camp? Or get involved in a school production.
1:02 PM, June 08, 2009

Liz Dwyer said…
BZ,
I definitely think the acting classes will the way to help him get his feet wet and see if he really likes it. Sigh, I'm gonna go broke being a parent.
12:42 AM, June 09, 2009