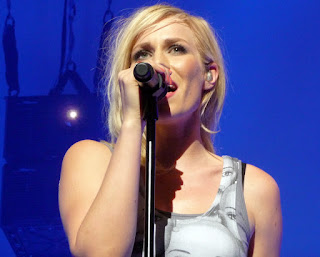 What happens when you throw the E3 Convention, Nintendo and Grammy-nominated singer Natasha Bedingfield all together? A fabulous concert and party, that's what.

If you're wondering what the heck E3 is, it's the fab Electronic Entertainment Expo that's been going on in LA this week. It's a huge video game convention and I have to say, if I was a single lady, this would've been THE PLACE to meet somebody because wow, there were maybe 1000 men for every woman there!

Seriously, every single lady I know in LA complains that there's nowhere to meet a nice guy in this town, that they're all too "industry". Take note, these were not slick, industry types at this convention. And no, all gamer nerds are not ugly, so next year, take yourself to E3!

But I digress...
In the midst of all the video game heaven, Nintendo threw a fabulous party at the newly opened and super hip Club Nokia, complete with a concert by Natasha Bedingfield. How lucky was I to get invited because wowzer, it was FUN!
Pre-concert there was lots of food and huge 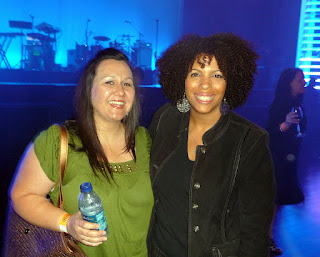 screens showing shots of upcoming Nintendo games. We ate and made merry, and then I and some of my fab blogging pals, like Yvonne from Joy Unexpected, managed to wiggle our way to where we'd be standing right in front of the stage!

Never mind that I neglected to notice that I was standing right in front of a speaker... I was too busy having a good time and was amped to hear Natasha sing. Of course, I had zero ear plugs to protect my hearing, so I'll probably go deaf in my swiftly approaching dotage.

The President of Nintendo North America finally came out and introduced Natasha and then she got to singing. And wow, can she SING!!! I'd heard her on an award show last year and thought she sounded pretty good, but the woman can really rock it and has total confidence when she's on stage. Here's a bit of footage of her singing "These Words". Sorry for the audio quality. That's what I get for standing right in front of the speaker: 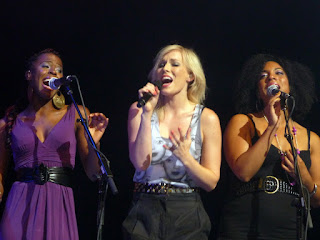 She had a really good energy while performing and I absolutely loved her backup singers, especially since one of them is kinda my hair twin!

A really cute moment was when she sang a cover of "Chasing Cars" using the Nintendo DSi -- she didn't know all the lyrics and there's a program for the DSi (can't remember which) that has song lyrics on it. I guess it's like hand-held karaoke. She also did a cover of Madonna's "Ray of Light" and I found myself thinking that Madonna only WISHES she could sing that well.

After her performance, the DJ began spinning tracks, and that's when I knew that I was in a room with a lot of guys who were NOT from America. I mean, American men do not dance with each other in a group when Bob Sinclair's "World Hold On" comes on.

When I got home at a little after 11, my eight year-old was STILL up and he practically pounced on me. "Did you get to play any video games? Did they have any cool games there?"

Once he found out there was singing, dancing, and I didn't actually play any games, he retreated to bed, mumbling to himself, "Sounds like a boring party..."

If only he knew how much fun mommy had on the dance floor!

nick said…
I loved Natasha's first album but wasn't so keen on the second, I felt she'd rushed it out for commercial reasons and hadn't really let the songs mature properly. But yes, she's got a fantastic voice. I just adore Fiona Apple too.
1:12 AM, June 05, 2009

nyc/caribbean ragazza said…
I agree Natasha has a great voice.

I LOVE Bob Sinclair's "World Hold On". It was the song of the 2006 World Cup. It's crazy popular over here.

Jen said…
I ADORE Natasha Bedingfield and have even before she was big here, thanks to my German daughter, who turned me on to her. While I agree with Nick about the second album, I think she's amazing. I also LOVE "These Words" - that song hits me on so many levels.

Ingrid said…
i love the fact that your kids don't skip a beat to let you know how they feel. "sounds like a boring party." hahaha. mama, had a good time. that's what counts.

and i know some american men who would dance to "world hold on"....and they're not all gay. teehee. there are some straight ones in that group too. that song was pumping out of many cars on election night in grant park.
11:00 AM, June 05, 2009

Liz Dwyer said…
Nick,
Such a fantastic voice! I remember buying her brother Daniel's CD a few years ago. Wonder what happened to him.

NYC/CR,
SUCH a great song...and it always sounds fresh. I remember telling somebody a couple of years ago that it should be played at Obama campaign stops! ;)

Jen,
I really like that Natasha was fully dressed, and she seems to sing songs that are more about empowerment instead of degradation masked as empowerment.

Cyndee,
LOL, I didn't feel cute because my feet were killing me in my heels but I enjoyed myself anyway! I possess no cute flats for my post-marathon-destroyed toes!

Ingrid,
Oh they never ever hesitate to say what's on their minds and I like that, whether I agree or not. LOL, that the guys you know aren't all gay because I'm trying to figure out if I know any straight ones who'd seriously dance in a group to it and I don't think I do. Then again, I haven't put them to the test lately! ;) Very nice that that was playing in Grant Park last November. Very fitting!!!

leila said…
Los Angelista, I WANT YOUR HAIR! you and yvonne---what beauties!

Ann Harrison said…
This sounds like a wonderful party.

Hearing Natasha sing is so refreshing. There ARE great singers out there! Thank goodness.

Liz Dwyer said…
Leila,
You are SO nice to say so! I wanted my hair from the other night today, too! I had the worst hair day today! :)