For Great Grandmother Butler On Juneteenth 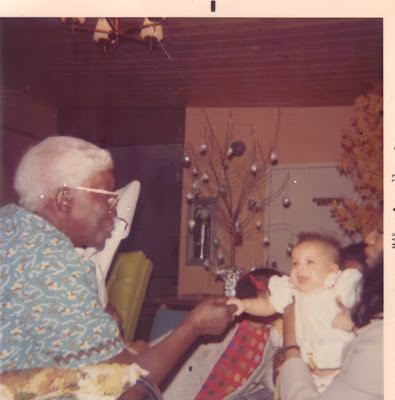 Today's Juneteenth, the day in 1865 that slaves in Texas found out about the Emancipation Proclamation --and their freedom-- a whole two years after the proclamation had been signed.

This is one of the most significant days in African American history, and on such days as this, I find myself thinking about my own connections to slavery.

My great-grandmother, Mrs. Butler, was born in 1879. Both of her parents, my great-great grandparents, were slaves. When I look at this picture of me with her, I often imagine I can feel her reaching out and touching my five month-old hands, I often think about how those same hands were held by slaves who had toiled in plantation fields without compensation, and while being treated as only 3/5 human.

I didn't see Grandmother Butler very often, but I remember she had such kind eyes and her smile appeared so easily. I was seven when she passed on at the age of 100, and I still remember how hard I cried at her funeral.

Sometimes I try to imagine what her life was like when she was the age I am right now, and the things I imagine are never joyous things. I imagine the hardship and blatant racism she and her family must've faced on a daily basis.

Yet Grandmother Butler was not a bitter woman, even though she was born in the South two years after the end of Reconstruction, and 16 years after the Emancipation Proclamation. I know that her faith was her rock, the thing that enabled her to retain her humanity despite the racist oppression which surrounded her.

I can't begin to guess what she would've thought about yesterday's Senate resolution to apologize for slavery. In her day, such an apology was unthinkable. I imagine that she would have, on some level, appreciated the gesture, and would have, if she could've, celebrated Juneteenth even more today.

So with the daughter of slaves, my Great Grandmother Butler in mind, this evening I'll be celebrating Juneteenth with my family. I want to tell my boys the story of Juneteenth and share some slave narratives with them. The memory of our ancestors, those individuals whose blood runs deep into soil we now take for granted, and whose dreams and hopes could never be realized, should not be forgotten.
Email Post
Labels: african american Black people Family History juneteenth racism slavery united states

TaraMetBlog said…
Thank you for sharing. So important to honor your relatives and be aware of your heritage. Great photo too.
2:15 PM, June 19, 2009

Ingrid said…
Amazing. Thank you for sharing this connection and the importance of this time.
2:19 PM, June 19, 2009

alyosha19 said…
This is a great resource for slave narratives:

Liz Dwyer said…
Tara,
Thank you for reading! I love that photo of her holding my hand. It says so much and is so special to me.

Ingrid,
I think we're encouraged by our culture to think of slavery as being a really, really, REALLY long time ago. But when we think about it, it's all just a heartbeat away from us. Remembering my great grandmother reminded me of that.

MH,
Thank you for saying so. This history is our history as Americans. I think more folks of "lighter hues" (lol, love that way of putting it) can and should engage with it.

Alyosha19,
Thank you so much for sharing. I have a copy of Bullwhip Days that I've been leafing through, but the audio narratives will be great for them. I really appreciate your sharing.
3:58 PM, June 19, 2009

Daniel said…
"Yet Grandmother Butler was not a bitter woman, even though she was born in the South two years after the end of Reconstruction, and 16 years after the Emancipation Proclamation. I know that her faith was her rock, the thing that enabled her to retain her humanity despite the racist oppression which surrounded her."

They HAVE to be some of THE greatest Americans ever, to do what they did and never lose faith. Though no-one's going to acknowledge that, right?

Lisa Johnson said…
Beautiful post and photo! Happy Juneteenth to you. This definitely is a day to pause and reflect.
7:48 PM, June 19, 2009

nick said…
I think it's important for all of us to consider the everyday freedoms and possibilities we take for granted and how our ancestors didn't have all those freedoms but led much more constrained and arduous lives.

Good that your grandma kept her humanity despite all the oppression and inhumanity she faced from others.
12:37 AM, June 20, 2009

Lotus Flower said…
Your great-grandmother looks so much younger then she was in that photo, Liz. The child of former slaves?? Wow! I'm sure she had some stories to tell to her grandchildren! I wonder how her parents felt about being set free?? Maybe the same euphoria we all felt the moment Obama was elected President?

It's amazing to me that you came in contact with a relative in such close proximity to history that we've only heard in school, read in books, and seen in old photos. THAT is something to remember, you know?!.

heartinsanfrancisco said…
I think stories like this are even more important for those of really light hues, ie "white" people, to hear because it is American history, not just Black history. Knowledge is power, and the only way to prevent such atrocities as slavery from ever happening here again is to ensure that everyone is able to put a human face to it, and to understand that such stories affect all of us even today, so many years later.
11:45 PM, June 20, 2009

Liz Dwyer said…
Daniel,
I cried while writing this so you are not alone. I often do when I think about the tenacity and spiritual endurance of black folks in this country. It helps me slap myself back to reality when when I start to feel a little sorry for myself.

Anali,
Thank you. Hope it was a wonderful Juneteenth for you as well!

Nick,
Nowadays we definitely take lots of freedoms for granted, and believe that certain things are rights/freedoms when they really aren't. I often think what we call freedom is really out of control individualism.

Mimi,
It was a great Juneteenth. My sons are SO voraciously interested in slavery and its history so they loved learning more about it. Mrs. Butler does look younger, doesn't she? Totally shallow of me, but I hope I have those genes! :) Sadly, we didn't get to hear many of her stories because we didn't live so close. A famous story in my family is of me crawling under her wheelchair and trying to peer under her dress because I didn't believe she didn't have legs! I was more fascinated with that when we'd go see her than anything else. It wasn't until I was older that I realized how close to touching the history of slavery I really was.

Jessica,
So very nice of you to say so. The feeling is mutual! :)

Heart,
Definitely it's American history and should be seen as such. I have for a long time had the idea of a fictional book (or two) loosely based on stories of both my great grandmother and my grandmother. I'm a great believer in fiction being able to relay history -- Maybe I should ditch what I'm working on now!
1:27 AM, June 21, 2009