Lil Wayne Will Never Be My Baby Daddy 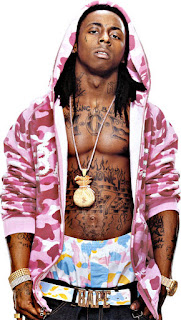 Hi, I'm Los Angelista and I am NOT pregnant by Lil Wayne.

If he ever did try to step to me, and assuming I could even understand what he was saying, I'd say, "Oh no, Wayne. I'm too fat and ugly for you. Plus, I'm opinionated, weave-less, and half a devil!"

All that should drive Weezy away, right?

But if somehow the apocalypse happened and I lost my mind and ended up in flagrante delicto with Mr. Sippin' On Some Sizzurp, I would probably still have the presence of mind to demand that he wear like ten zillion condoms.

Or we could just make a REALLY big one to cover his whole entire body, and then, well, what would be the point?

But the apocalypse has not happened, and Lil Wayne probably has the money to pay for not just one condom, but an entire condom factory... which is why I don't understand how not one but TWO starlets can allegedly be pregnant by this man at the same time.

First we had the mind-boggling info that actress Lauren London was knocked up by Wayne... 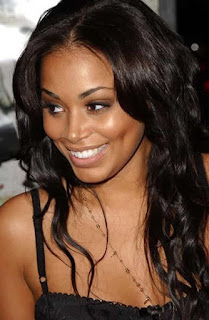 What? Did you get hypnotized by one of Wayne's tattoo teardrops, Lauren? Did you hit your head and start hallucinating that he was Idris Elba?

And then there's singer Nivea, whose momma clearly was not a fan of ashy elbows or knees... 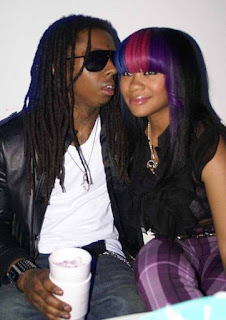 That poor child's wig probably just slid down her forehead and she couldn't see what was going on.

But seriously, do these adults not understand that getting unexpectedly pregnant isn't the worst consequence of sleeping around? Do they not "get" that if you're gonna go there, at least try to protect yourself from STDs by using a condom?

I guess not. So, instead of the fashionable duds, they should just throw on t-shirts that say, "I want HIV! Infect me!"

And if you (yeah, you reading this blog) need one of those t-shirts too, let me know and I'll go to Target, pick up some white tees and a Sharpie. I'll express mail your new "going out" gear to you so you have it ready for this weekend. I'm sure you'll look supa-dupa grown-n-sexy in it.

Yeah, Lil Wayne will never be my baby daddy, and he sure shouldn't be for these two ladies either. Sorry Weezy, Lauren and Nivea, y'all have GOT to do better!
Email Post
Labels: HIV Lil Wayne Pop Culture pregnancy Sex

Faith at Acts of Faith Blog said…
I just threw up in my mouth. First of all he seems CRAZY! I feel bad for the sexual abuse but that why you go to therapy, ok?! New-New - oh no!!! Nivea was married to the Dream - again with these names and this juvenile behavior!!!??? I'm still not over the fact that Mel B slept w/ Eddie Murphy. I mean aren't there other less dangerous way to get $$$? And yes I'm saying these women are doing this accidentally ON PURPOSE. What's really pathetic is they all have MONEY and CAREER OPTIONS. Unless they're all really deranged. Those poor kids...
8:58 PM, June 10, 2009

nyc/caribbean ragazza said…
I was on Field Negro's blog and he had a post about a brother who had 11 children by different women before 25 or something crazy. He can't afford child support.

nick said…
Excuse me but how could any women fancy a guy who seems to have very noticeable man boobs? Or are they preferable to a hairy chest?
1:39 AM, June 11, 2009

And I have to hop on the bandwagon re: the unprotected sex. Those girls don't have a lick of sense. That is a damn shame.

Jameil said…
everybody has to do better. don't you want something for your child other than a baby daddy you've known for abt 3 days. i didn't think he wrote Sippin' On Some Sizzurp... lol. that was during my hood music days. i think that was 36 mafia... i hadn't heard abt nivea but it is so much harder to shock me than it used to be. i barely blinked over lauren london. being cute or talented unfortunately doesn't come with brains or common sense.
10:50 AM, June 11, 2009

That's my answer as to why these ladies do/did it.

I can NOT get over the pants-below-the-ass thing.

Those aren't man-boobs. (I believe) He has a developed and defined chest, but that's it. No abs. No bi-triceps. I give props where props are due. He just covers his in tats.

Kathy Rogers said…
I would like very much to believe that the first photo is intended as parody.

Liz Dwyer said…
Faith,
You''re probably right. If this dude worked at 7-11, I don't think either one would've slept with him. But even if the ladies are doing it on purpose, and it sure could be, doesn't he have the sense to wear a condom? (Why am I asking that question when clearly, the answer is NO.)

NYC/CR,
I went to high school with someone who had that many kids before the age of 20. It was just gross.

Jen,
I could make a little college fund from selling those tees to the hipsters around here. Hmm...

Lisa,
I think Nivea was playing with a My Little Pony before she bought that wig. The colors sooo reminds me of those.

Jameil,
I know... I only call Wayne that because remember how he used to always roll around with a cup? I guess I was surprised by both of them because it just seemed like, wow, y'all are BOTH trifling! Sigh.

1969,
That's because you have class and self-respect, whereas the parties involved can clearly only think with their hormones... but even then, sleep with someone else if it's like that. Not Lil Wayne!

Sippinwineman,
They like bad boys until that bad boy somehow goes bankrupt. Who knows, Wayne could be broke in a few years.

Mimi,
Is he really that short? Wowzer.

I think he always either sad or high. I can't say I'd want that for the father of my child, at all, and I don't know why these ladies do, even if it is about $$.

Carolyn (Diary of a Sewing Fanatic) said…
Okay I'm gonna lose my job reading you at work! I was laughing so hard at this ish that I almost lost it! I have no comments about Lil Wayne...he is in the same place for me right now as all the Bushes...the no comment zone!!! But I might need one of those Target t-shirts! Do I just email you my address and check?! ROTFLOL!
7:08 AM, June 12, 2009

Liz Dwyer said…
Carolyn,
Nooo, don't get fired, chica! But I laughed while writing this, even if the HIV thing is no joke. Folks take too many risks with their lives, and for what? A few minutes of pleasure? Stupid!

As far as the Lil Wayne's of the world, I try to remember that they're here today and gone tomorrow, but in his case, tomorrow can't come soon enough! Can't there be a backlash that'll put his fashion and his "rapping" out of style?
9:36 AM, June 12, 2009

Lili said…
LOL! He is so yucky - c'mon ladies surely you are not that broke!! No amount of money would make me let that dude near me..
Honestly there are way too many women these days with no sense or standards!
9:27 PM, June 12, 2009

Shiona said…
As I'm reading this that stupid song Lollipop keeps popping in my head. He is one ugly dude and I would stay far away from him and said "lollipop." Your last sentence said it all they have got to do better.
10:00 PM, June 14, 2009

Liz Dwyer said…
Lili,
Too many men and women without standards. This sort of thing has GOT to change!

Shiona,
Ugh, I hated that song! Everytime I heard it playing somewhere I'd picture the gates of hell opening and the devil smiling... you know?
4:53 AM, June 16, 2009