And Justice For Baha'is In Iran, Too 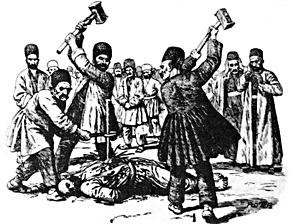 On the drive to Venice Beach yesterday afternoon, I couldn't stop checking my Blackberry for Twitter updates about the situation in Iran.

Once there, I set up my beach blanket, shooed my children off to chase waves, and proceeded to talk my friend's head off about what's going on. I'm sure she just wanted to relax in the sun, but I couldn't help it.

I was horrified by the stories and the video of the murder of a young female protester named Neda. Her innocence made me think of other young women murdered in Iran for doing nothing other than staying true to their beliefs. This past Thursday was the 26th anniversary of the murder of 10 Baha'i women from Shiraz. The youngest, Mona Mahmudnizhad was only 17, and her only crime was that she was a Baha'i.

A friend I've known for almost 25 years recently wrote this:

"In 1979 my parents left everything they had and fled Iran to avoid what my father knew was inevitable once the clerics took power. It wasn't easy for my parents to make this decision. My father left a executive position at Tehran Pepsi Cola and traded his suit and tie for a fast food chain uniform. No less than a month had passed and the injustice towards the Baha'is began. Thousands of Baha'is share similar stories. My family's exit was easy compared to the families that escaped through the border by the help of smugglers. Still the ones that were left behind were the worse to fare. At the early age of eight, I had a great sense of appreciation for my freedom. Many 4th of Julys I would glance at kids, youth and adults in awe of the fireworks wondering if they were aware of what they had."

For months now, Baha'is around the world, including my old neighbor, Rainn Wilson from the TV show "The Office", have been speaking up about both past persecutions as well as the latest efforts to carry out the genocide of the Baha'is in Iran. Yes, genocide, as in murder and extermination.


I pray that the outcry of the Iranian people for justice and freedom will soon include all of the their Persian brothers and sisters, regardless of their religious background. There needs to be justice for the Baha'is of Iran, too.
Email Post
Labels: Baha'i freedom Friends genocide Iran justice murder

Jen said…
This is horrifying. It seems to be similar to what Seventh Day Adventists have gone through in southern Russia.

nick said…
The official repression going on in Iran is appalling. Inevitably complete innocents like Neda get picked off in the process. And of course "undesirable" religions like Baha'i. I hope popular protest brings about a more democratic society, but I'm not holding my breath....
9:45 AM, June 21, 2009

Liz Dwyer said…
Jen,
It is truly horrifying and I don't really understand why there isn't more media. I think in our sensationalized, celebrity-driven culture it's assumed that the rest of the world won't care.

Nick,
I hope the protests create positive change but I don't think it'll happen overnight. And I don't know if the media (or people on twitter) has the attention span to stay with the story long-term. But I'm hopeful. After all, we've seen the fall of the Berlin Wall, collapse of the Soviet Union and opening of China, all in our lifetimes. So maybe unimaginable good things could happen in Iran?
10:34 AM, June 21, 2009

On a limb with Claudia said…
It's so sad... so very sad... The whole thing reminds me of Bosnia... and every other thing.

Anonymous said…
The horrid killing of Neda is burned into my memory and I don't want it to be there. And the case of the Baha'is in Iran is an ongoing and tragic story that attracts so little international attention. Powerful post, my friend.
4:34 PM, June 22, 2009

Now I'm hearing that five family members of the Ayatollah are in prison for simply supporting Mousavi. They weren't even protesting.

In a way, it's good to finally see the US media outlets showing that not every Iranian supports Ahmadinejhad and what he stands for. Many of them actually WANT a more liberal society and not a government who upholds Islamic law (heck, at one point the U.S thought of Iran as the most Westernized Muslim nation in all of the Middle East). I hope that these protests turn into some quest for a movement or dare I say, a revolution.
10:03 PM, June 22, 2009

Liz Dwyer said…
Claudia,
I am simultaneously saddened and amazed by what is going on in Iran. I don't think the world saw this coming at all. Maybe the Iranian gov't didn't either.

Ian,
It's amazing to think, without modern technology, we probably wouldn't even know Neda's story. The way women are standing up in Iran is incredible. Their fearlessness and courage totally goes against so many stereotypes of women from that part of the world. I am so hopeful that the general quest for freedom in Iran will include ALL. What's really crazy is how some Iranian officials are trying to say Baha'is are in cahoots with the BBC and are trying to make Iran look bad. Just nutso.

Mimi,
I agree. The government there even made a "final solution" type plan to exterminate Baha'is. I agree, the rest of the world is really getting to see that Iranians have lots of viewpoints and want the same basic rights that everybody else does.
1:53 AM, June 23, 2009

Anonymous said…
The whole situation is horrifying and I am praying for a peaceful solution in Iran before more innocent lives are lost. Violence is never the solution.

Do you ever find, in your own insides, the huge conflict of wanting to HATE this world SO much ... but knowing you Really want your heart filled with love instead?
Maybe I'll just explode one day ... lol.
1:20 PM, June 23, 2009

Lotus Flower said…
I was just reading on HuffPost about how Ahmadinejad is threatened by Twitter now. Hahahaha!!
2:18 PM, June 23, 2009

Liz Dwyer said…
1969,
I am sooo praying for a peaceful solution, but it's disappointing how even here in the States, folks are using the situation in Iran to score political brownie points. When will folks learn that while they're trying to dominate a news cycle, real lives are at stake?

House,
Peace is definitely the only way. We are in such a time of upheaval because it's so clear that we have to move toward recognizing that everyone on this planet is dependent on and responsible to everyone else, but folks still want to keep the same divisions going and it's just not working. Actually, it hasn't worked in awhile.

Daniel,
I think I'm too optimistic, still, to hate this world. There's so much destruction of old ways of being and living, while also the creation of new models of civilization. But we are undoubtedly at such a low point in history. I do have a LOT of fear. Sometimes it's paralyzing and that's not good. I have a theory that when you grow up afraid of a lot of things and feeling like you have no control over what happens to you, you are more likely as an adult to develop paranoias. It's not normal for me to constantly think that my kids won't live to adulthood because we live in LA and either gangs or the LA version of September 11th is gonna happen. But, even though I know it's crazy, I think about that EVERY day.

Mimi,
Good! I'm glad he is! Twitter is proof that our technology can be used for dumb stuff like talking about how Yoshinoya (which I just did) or taking action and educating each other about real things that matter.