"You Wanna Go To Jail Just Like Your Daddy?" 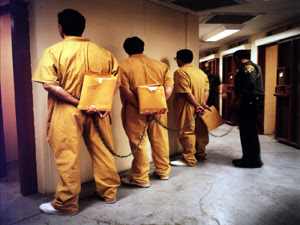 The question echoed down the hallway, causing me to snap out of my self-absorbed musings concerning my engine light coming on this morning and my need to clone myself so I can be two places at once this Saturday.

I observed a trio just ahead of me to my left: A little boy, his mother and his teacher. His mother was obviously not pleased and neither was the teacher. The little boy hung his head and shook it from left to right in response to her rhetorical question.

"Then stop acting up, having me come up here off of my job to deal with you," his mother said.

"Mmm. Hmm," said the teacher. "You better listen to what your momma's telling you. It's the same stuff I've been telling you."

I made eye contact and nodded my head to them, the universal sign of greeting for black folks. I scooted past them and on down the hallway.

His mother's voice continued behind me, echoing in it's harshness and anger, "You wanna be a thug? Huh? You wanna try to act all bad and hard? What you think that's gonna get you?"

He didn't say anything but the teacher chimed in, "I tell him that every day. He knows that's not how he's supposed to act."

From his size and the location of the classroom, this boy was probably six years old, either in kindergarten or first grade. This is a scene I've witnessed all too many times over the past eight years. A child misbehaves in school and the conversation isn't about, "You might fall in with the wrong crowd." It automatically jumps to this place of heightened seriousness: prison.

Why are we talking about prison instead of college? I know the answer to that question, of course. There is no real expectation that this boy will go to college. I didn't hear his teacher say, "You are so smart that I think I must need to challenge you more so you don't misbehave in class." No, she'd never say that.

His mom, well, her fear is voiced for anyone strolling the hall to hear. She's probably seen her fears become reality all too frequently in her neighborhood, one of the poorest in Los Angeles.

Of course, I can get up on my soap-box because I don't live there. I get in my car and drive home everyday. My own kindergartener is determined to go to Notre Dame. He's debating whether he should be a pediatrician or a scientist. His teacher showers compliments on him about his behavior and his academic prowess and I'd be ready to sue if I saw otherwise.

the last noel said…
This is what I fear if I become a parent: how do I properly explain the world to my child? Chances are, I'll adopt. How would I explain to my son or daughter why he or she is an orphan?
4:47 PM, December 07, 2006

Liz Dwyer said…
Noel, I imagine you're going to be an excellent father and you're kids will spend a lot of time laughing and reading.

Jon said…
I wonder how many generations it will take to cure some of these societal ills that we have been dealing with for so long...
6:26 AM, December 09, 2006

Liz Dwyer said…
Jon, I wonder that as well. I suppose things can change drastically within one generation if enough concerted effort is put forth to make the change lasting and meaningful. I just keep thinking that something incredibly monumental is going to happen to bring all of the things that change into sharp focus. Something will happen that will make the systemic "isms" that plague our world have to change.
11:16 AM, December 11, 2006

heartinsanfrancisco said…
So much pain. If only mothers living in terrible situations could focus on their children's potential instead of the father's failures, those kids could grow up feeling good about themselves and believing they had options.