It's Christmas Eve...And All I Can Think About Is James Bond

I'll admit it. I was one of those people that was less than enthusiastic about Daniel Craig being chosen to play James Bond in the remake. To be clear, I was not bothered by his blond hair like the cornballs who actually took time to set up websites vociferously proclaiming, "Daniel Craig sucks. He's blond and only 5'11"! James Bond only has dark hair and is six feet tall. Let's boycott the film!" Sure, that's what Ian Fleming said Bond should look like...but this is 2006. To me, the producers could have put any actor from any ethnicity into the role and I wouldn't have had a problem.

So why my lack of enthusiasm? You're going to think this really mean of me but...well, when I saw pictures of him, I couldn't help but think that this guy was, to be quite frank, ugly as sin. He was not the image of a smooth, suave, handsome guy who just happens to be a secret agent. I didn't want James Bond, the subject of countless fantasies, to have a face only a mother could love. I thought they should cast him as the villain in the movie, not as Bond. 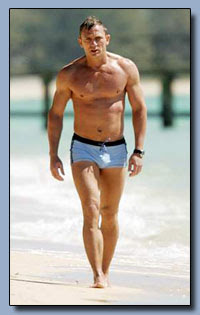 Last night, I was ready for the 10:55 pm showing of Casino Royale. Ensconced in my comfy seat at The Grove Theatre, munching on Red Vines and drinking a green tea, I was prepared for the usual Bond fare, you know, gadgets, guns and girls. However, thirty minutes into Casino Royale, it became clear that Daniel Craig is a new Bond.

This Bond is, first and foremost, a cold-blooded killer/secret agent. Accordingly, Craig really brings a rugged athleticism to the role. We haven't seen Bond whup ass like this in years. Thankfully, he only uses the girls and gadgets sparingly to get what he wants. All that was great. Fantastic. Fabulous. But the most shocking surprise of the cinematic experience was when I found myself thinking, thirty minutes into the film, "He's hot." And then, "Damn, he's really hot."

What? How did I go from thinking Daniel Craig is completely unattractive to...being a bit infatuated with him? I'm still trying to figure out this change of heart. What did it? Was it the strength of the writing? Craig's acting ability? The eye-candy worthy scene of him walking on the beach? Was it the way Craig actually used his acting abilities and made the character emotive instead of merely a cliche? Or was it the way this Bond is clearly not relying on his looks to accomplish his mission?

If you've seen it, did you have the same experience?
Email Post
Labels: Casino Royale Daniel Craig James Bond Movies

Anonymous said…
I've seen Casino Royale at The Grove more than once LOL! I was skeptical about him also. I didn't think he was ugly, just didn't think he looked like James Bond. Until I saw the first trailer for film earlier this year. My reaction to the trailer was "damn!, that looks soooo hot!" I really thought at that point he had a good chance to pull it off. And did he ever!!! I'm really happy for him after all the abuse he took on the internet and in the press. Variety magazine just wrote an article yesterday that Casino Royale has surpassed Die Another Day as the highest grossing Bond film worldwide at $448 million and still counting. Can't wait for Bond 22!!

Liz Dwyer said…
Nice to see someone else knows all to well about those astronomical ticket prices at The Grove! $12.75 for a crap movie is ridiculous. For Casino Royale, I'd do it all over again. Craig is clearly a gentleman to not be rubbing his success in the face of his former detractors. I also can't wait for Bond 22!
1:03 AM, December 26, 2006

The Counselor said…
Years ago, my parents used to drag me to see every James Bond movie to hit the big screen. So, naturally, I've kept my distance from him as an adult. Now, after reading your post, I'm absolutely anticipating seeing Casino Royale!! I'll let you know how it goes....

It's something about someone not trying to be attractive--that's absolutely sexy!! LOL

Sundry said…
Haven't seen it, but I can only say that I hope that this means that some one will knock the dust off of the old Matt Helm series of TERRIFIC spy guy books and do them right this time. They are wonderful brain candy, nothing like the atrocious Dean Martin Matt Helm movie.

Have you seen Pierce Brosnan knock his old Bond image on its ear in Matador? Crass, but fun and surprising.
12:05 PM, December 26, 2006

Ooh, Clooney would be a fabulous Matt Helm. Now that you say it, I can't really think of anyone else that would fit the bill. I haven't seen Pierce Brosnan in The Matador...I had to settle for seeing him out a Santa Monica Pier. Very good looking in person.
12:05 AM, December 27, 2006

Anonymous said…
Casino Royale was my first Bond movie and I wasn't all that excited about it and hadn't been impressed, like you, with photos of Daniel Craig. But by about five minutes in I was DROOLING over him, much to my hubby's chagrin. And in discussing it with my mom the next day (who's also not a huge action fan), I found that we had identical reactions. I can't wait for the next one!
3:48 PM, December 27, 2006