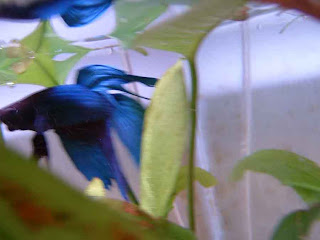 My husband passed a piece of paper to me early this morning while I was nestled on the couch watching cartoons with my two sons. It took a moment for his hastily scribbled sentence to register. Nemo is dead? What?

Then, I looked up to our small fish tank, tucked back on a shelf amidst various family photos. Nemo, our blue beta, was floating motionless at the top of the water.

My husband took the piece of paper back so he could write some more.

After much scribbling back and forth, his vote was to just flush Nemo without telling the kids and then sneak out and get an identical beta. My vote was to tell them so they could learn some deep life lesson about death, you know, we pray for Nemo's safe progress into Happy Hunting Ground, bury him in ceremonial fashion and get some small rock to be his headstone.

In the haze of everything I've had to get done today I keep forgetting that there's a dead fish floating on a shelf in my living room. Oh, I'm a bad parent, aren't I? Except, my boys have not yet noticed that Nemo is dead. All these hours that we've been here in the house, neither of them have even glanced at the fish tank. Perhaps Nemo, (the fish with the most boring name on earth) was not as entrancing a pet as I believed.
Email Post
Labels: Death Family Pets

Sundry said…
It is very dear to envision you and your husband passing notes to each other.

Interesting how the passage of a few hours informs the decision. Hope you post about what you end up doing about Nemo!
10:11 PM, December 09, 2006

Jon said…
Kids neeed to learn about the hard stuff from the people that love them the most. Death is one part of life. We'll mourn, grow, and finally move on without ever forgetting those who didn't make the trip.
5:41 AM, December 11, 2006

Liz Dwyer said…
We had our Nemo funeral yesterday and there were quite a few tears all around, including from me, which surprised me quite a bit. Sundry, I will definitely post later today about it because it was definitely a first for our little family.
11:24 AM, December 11, 2006