1) I could have lived without seeing Saddam and the noose. Someone at every news channel felt like you and I wanted to see Saddam's execution. Over and over and over. And then one more time just in case we hadn't really seen the way they tightened the noose around his neck. Oh, and here's another shot of the body in a white shroud. Um, I didn't really want or need to see that. I'm fine reading about it or seeing a still head shot of Saddam behind the newscaster. You say I can turn CNN off? C'mon, be real. Who looks away from train wrecks these days? Plus, I was really trying to watch a funeral, James Brown's to be exact, so I didn't really want to turn. Speaking of funerals...

2) The Godfather of Soul /vs/ a former President of the USA. Two funerals happened today. James Brown's "homecoming" and Gerald Ford's State funeral. More people went to James Brown's funeral than to Gerald Ford's. Like 8,500 more people. At James Brown's funeral, we had Michael Jackson, Al Sharpton, Jesse Jackson, Dick Gregory and Bootsy Collins all on one stage. Gerald Ford got Dick Cheney. George Bush, our current President, didn't attend. He was out at his ranch on vacation. It just seems wrong for a sitting President to not go to a funeral of someone who once held the same office. Hasn't George Bush ever heard of karma?

3) One week of vacation is over, one week still to go. I'm glad I took two weeks off. It wasn't till this past Wednesday that I stopped waking up at 5:45 in the morning without an alarm clock. But it's going too quickly. I need time to slow waay down. I don't want to go back to work. 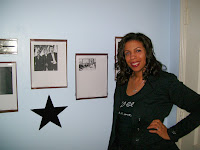 4) Alas, the decorations must come down. The best part of having a theme party is getting to decorate for it. Friday night's "Black Celebration" Depeche Mode birthday party was fantastic but before anyone even arrived,we all had fun decorating my place. Believe me, pictures of Depeche Mode are everywhere. In the bathroom, in the kitchen, on the doors, on the walls. Everywhere. I know I can't leave pictures of Depeche Mode up on the walls forever. But, how about they stay up for a couple more days, pretty please? At least till the tape starts to unstick and the pictures fall off.

5) Bette, Michael, Nirvana and my kids. My boys think Bette Davis is mean and said, after watching a commercial for one of her movies, "She shouldn't slap people. That's mean. She's a hard woman." I was hiding from my boys that the Michael Jackson they saw on tv at James Brown's funeral is the same artist they saw in the "Beat It" video. They asked who it was and I said, "Oh, I don't know!" I know if I'd told them they would've said, "That's not him. We know what Michael Jackson looks like. You're trying to trick us." Hmm. If only that were the case. The last thing I'll tell you is that my three year old knows the chorus to Nivana's "Smells Like Teen Spirit" and likes to sing it while he's naked. Ah, aren't I lucky to be a mom?
Email Post
Labels: Bette Davis Birthday Depeche Mode Funerals Gerald Ford James Brown Saddam Hussein

Junk Monkey said…
TV news rarely gets put on in my house so I am glad to say I missed the lynching.

Liz Dwyer said…
Odat,
Thanks for the New Year wishes! Hope yours is fantastic.

Liam,
Yes, James Brown is dead. Oh my goodness, I just remembered there was a great techno record from the early nineties with that title.
2:41 AM, January 02, 2007