Are you just getting started on thinking of ways you want to improve yourself in 2007? Or maybe you're more advanced than I am. Maybe you're ready to go with a list of things to change and improve about yourself. Do you already have your list typed up and signed in blood? Have you laid it out in a project plan? Are you type-A? Hmm?

I'm not yet in a place where I can ponder all the things I need to improve or change in 2007. I'm still trying to celebrate the successes I have had so far this year, either things I started doing or things I stopped doing in 2006. I'm not yet at the point where I can fully reflect on things like learning to accept an apology gracefully and not going to bed angry. Give me a week or so to warm up to those deep thoughts. In the meantime, since I live in LA, I've been reflecting on and celebrating a few superficial things that really do mean so much:

I've learned it really is better to leave some things to the professionals. Once upon a time, yours truly believed she was superwoman and could do it all. I even took this arrogance so far as to believe I could give myself a bikini wax. I will spare you the gruesome details...but I'll also throw in that I'd never had a bikini wax before so I really had no damn clue. I figured if I followed the directions on the box, it'd be all good. Um...No. I desperately called a friend about five minutes into it and she laughed for a good 30 seconds (well, maybe 60 seconds) before agreeing to come over and rescue me. Even with her assistance, I thought I was going to die. Yes, it's definitely better to leave certain things up to the professionals.
Life's too short not to wear red lipstick: I wore a whole lot of red lipstick in high school --

my mother wouldn't let me out of the house but she had no problem with me wearing lots of makeup, go figure. Then I became an adult and swallowed the nude/neutral/brownish lip idea. There's not a whole lot that's super fun about going around feeling neutral every day. It's so boring. Then one day, on an impulse, I hit up the MAC counter at the downtown Macy's for a tube of red lipstick. I was able to try on several different shades in order to get one that perfectly matched my skin tone. I even let the makeup artist teach me how to put on the lip liner, the lipstick and the cherry colored gloss. He was very clear about the steps, "Nothing looks worse than a poorly applied red mouth." He's right. Yes, it's a bit of work to get red lips, but it's really fun sometimes.
Day without any black clothes. I really like black clothes. A lot. To me, life's perfect when I'm wearing a really well-fitting pair of black pants, a well-tailored black shirt and a pair of black slingback heels. I have three black leather jackets. Two black tracksuit jackets. Two other casual black jackets. Too many pairs of black pants and shoes to name. I've even acquired two more 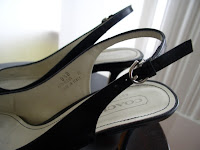 pairs of black shoes and a second pair of black jeans in the past month. Don't get me wrong, I do wear other colors sometimes, but I realized it was usually something like black pants and a pink shirt or my absolute favorite, some combination of white, black and red. This year, I decided I really had to branch out. My motivation? Well, someone I dislike a whole lot had taken to copying my style. It was really starting to annoy me. She even copied my short nails painted with black nail polish. I've since pushed myself to have days where I'm not wearing anything black, not even my shoes. I actually purchased a pair of chocolate brown pants and some brown shoes. I still can't believe it.

Sure, these three things may seem awfully superficial. It's not like I can say I beat insomnia in the past year. But, they mean something to me and I'm going to celebrate my victories and lessons learned.

What things from 2006, superficial or not, are you celebrating?
Email Post
Labels: Black Clothes Change Red Lipstick Success Waxing

Liz Dwyer said…
Sonia,
Glad to see I'm not the only one in the world that's tried to give herself a bikini wax. I just reread what I wrote and I'm simultaneously laughing and cringing about that experience. What was I thinking? ;)

Desiree,
I think there should be an international "Wear Red Lipstick Day." There should be if there isn't...who knows, it could solve all our global issues.
11:48 AM, December 27, 2006

Anonymous said…
LOL...I needed to read you today..thank you!!! Oh and I've done the self waxing...never, never again!!! You would think it would be simple wouldn't ya?
Good luck with the branching out of the black thing....I've done it and wear a lot of wild colors now..dark purple is my new black!
Peace!
2:11 PM, December 27, 2006

* said…
I'm going to be celebrating the success I had going off prescrip meds. I think that was the hardest thing I ever ever ever had to do...

Liz, I haven't been visiting in a while and I see you've had a lot to say about the holidays, the past, your personal successes and frustrations, so much. I've loved reading them all and wanted to comment but have had like, two seconds to call up my commenting juices. But this new year, I'll be toasting specifically to my scrip-free 11 months so far, my family's health and happiness, all the hard work we've put in this 2006 and all the new blogger friends like you that I've met this year. Peace!
11:21 AM, December 28, 2006

Liz Dwyer said…
Odat,
Glad it gave you a laugh! I really had no idea so many other women have tried the self-waxing thing.

Noel,
I remember how excited you were to get that computer. Your face was lighting up like a kid anticipating going to Toys-R-Us. Glad the reality of it has lived up to the expectation!

Peggy,
Your success is beyond huge and certainly more important my superficial musings on trusting professionals with waxing, wearing red lipstick and black clothes. So glad you came by to say "hey" today despite all your busyness. (Really the only reason I've had any time to write so much is that I'm on vacation.) Believe me, this year I will be toasting you with a glass of sparkling cider on new years eve. ;)
2:48 PM, December 28, 2006