You're Not A Real Writer 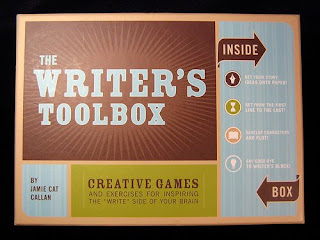 "You're not a real writer. How can you call yourself a writer when you don't even have a book published? Just because you like to write doesn't mean you're a writer. I'd say you're more of a wannabe writer."
I had to pick my jaw up off the floor as I listened to Anonymous Superior Person pontificate. "When you're published, then you can call yourself a writer."
OK, I'm not Toni Morrison or Jane Austen (yet) but let me get this straight - If someone puts disparate words together in an effort to tell a story that speaks to the heart and soul, they're not a writer?
They're only a writer if what they write is available in hardback for $24.00 at Barnes & Noble?
What kind of snobby, short-sighted kind of thinking is that? Granted, I have a looser definition of who's a writer and who isn't. I don't believe a writer necessarily has to be published to be a writer. After all, I've heard so many tales about writers who shopped manuscripts around for years -- years of rejection -- and then one day, someone said yes, I'll publish your book. That person was still a writer for all those years that he or she crafted their book and tried to sell it.
I write both non-fiction and fiction. I get paid for the non-fiction these days. I'm really really happy about that -- but what I also want is to finish the fiction and get paid for those stories. After all, those are the ones that meander through my subconsciousness the most. I think about my characters like they're real people, real friends of mine. What will they do next is always the question in my mind.
What holds me back the most as a fiction writer - heck, as a writer, period? Self-censorship. I worry overmuch that people will disapprove of what I write... folks I know already don't like some of the things I write about in this space, and they let me know it.
Having the "I don't think you should've written that" conversation is difficult. I don't want to hurt people but also feel like I need to be able to make the decision to write what I need to write, what I want to write. It probably comes off as selfish.
I've become much more assertive in letting people know they don't have a say in what I do or don't write about, how I write it, or where I write it. And they don't have the right to tell me if I'm a writer or not.
Only a few people I know actively encourage me and ask me about my fiction writing. I'm grateful for them. Very, very grateful. They provide a morale boost when I get overwhelmed by my fears about writing. They give me that encouragement I need when I feel down after mulling over the racism and sexism in the publishing industry and how female writers and writers of color have extra hurdles to conquer... good grief, that's a depressing subject if there ever was one!
But I'm not going to stop writing. Not ever. Not even when people try to tell me I'm not a real writer.
I know you've been there - those awful conversations you have where you realize the person you're talking to is angry, bitter, unhappy in their own lives, jealous, or lacking their own creative outlet, and they feel the need to try to bring you down. Sigh.
As I stood there trying to piece together a polite response to Anonymous Superior Person's statements, I realized something that made my anger dissipate just a little bit.
Anonymous Superior Person isn't a writer and so can't possibly understand the feeling that many writers share - If we don't write, we're not whole people. We're dysfunctional, we're unhappy, we're total asshats. You WANT us to have access to a keyboard, pen or paper because otherwise, we're unbearable.
Non-writers don't care if they never have to write again. For them, writing is a chore and they associate it with those awful English composition classes from high school and college.
Since writing's not something they love, they think of it solely in terms of status. Are you published? Are you paid?
Non-writers don't understand that ultimately, writing isn't about publishing or payment status. It's about connecting to your soul, and using words to connect to the soul of the reader.
I forgive you, Anonymous Superior Person, for your thoughtlessness, but trust me, when I am a published fiction novelist, I'll make sure to never ever dedicate a book to you.
photo courtesy of Flickr user shindohd
Email Post
Labels: barnes and noble fiction nonfiction novels publishing writing

Paulette said…
Had the same type of conversation recently with a photographer who felt I wasn't "the real thing" because I do it "part time." Hell, everything I do right now is part time! I'm a freelancer, the jobs come when they come. Doesn't make my talent any less real.

I have a hard time calling myself a writer, but I think that's much more because I'm not very disciplined and because I don't yet believe in my talent enough to take hold of that word. Maybe soon.
10:51 AM, August 12, 2010

nick said…
Totally agree, Liz. Of course being a writer isn't dependent on commercial success or lack of it. You're a writer because you regularly produce written material, period. Would that mean all the itinerant storytellers of long ago weren't really storytellers because they weren't published by Stone Age Publishing Ltd?

I don't think you even need a body of work as Nina suggests. Just the writing, out there somewhere, being read and appreciated.
1:07 AM, August 13, 2010

Sarah Auerswald said…
I hope you don't have to see Anonymous Superior Person very often because he or she is a poopy head. Oh, and wrong. You're a writer -- you're an EMPLOYED writer, even. Please change the name to Anonymous Superior Poopy Head in the next post.
6:52 AM, August 13, 2010

Liz Dwyer said…
Paulette,
What is up with people trying to put other folks in their place and tell them who/what they are? I know lots of part time photogs - it doesn't make their talent any less real. Yes, I write fiction and poetry too. Been a sonnet writer for a long time.

Nina,
YES! Go, Madeleine L'Engle! I completely agree. -- I can relate to your difficulty in calling yourself a writer. It took me a long time before I did - I guess I didn't feel worthy of it, but I realized that even if I am at times a bad writer or a less than prolific writer, it's still what I am.

Parkingspot,
Oh yes, I'm sure you can relate - Makes me think too about an actress I know who once told me that being a mother is the realest, most Oscar-worthy role she'll ever play. ;)

Nick,
Haha! Can I get an advance from Stone Age Publishing? That's funny. On the flipside, writers with lots of commercial success are criticized as being sellouts and not real "Artists". I guess you can't win no matter what.

Liz Dwyer said…
NYC/CR,
Exactly! I'm still pretty steamed about this conversation...and it makes me wonder, why do people I know think they can say stuff like this to me?
4:54 PM, August 16, 2010

Anne said…
I read this post awhile ago, but I've been thinking about it for the past couple of days. Have you noticed how the people that are the most encouraging to follow your dreams, regardless of how audacious (because you know, dreams should always be low and slight) are people who are successful and have reached the light at end of the tunnel BUT the people who are so quick to criticize us when we're trying to pursue our dreams are either bitter, jealous, or going nowhere themselves?
Interesting, very interesting...

This isn't to say that being a writer for you is still a goal, because you are clearly a very talented writer, but it just goes to show that meaningless people always trying to bring down others that are going somewhere in life.
7:06 PM, August 19, 2010

Dera Williams said…
It is always amazing to me the things that come out of folks' mouths. Who died and made this person the authority over what is and what isn't? That is just plain rude and I wouldn't be looking for a polite way to rebutt them. Rude people only deserve in kind. You don't have anything to prove. Not that is matters, but you said you get paid for writing; you obviously have a successful blog. The answer would be: "Oh, I didn't know you were an authority on writing." Leave it at that and keep it moving. Don't let anyone rain on your parade.

One thing is to have confidence in what you do. Even after having my nonfiction and memoir pieces in anthologies, I hesitated on calling myself a writer because most people equate a writer with having their own book. I had too many people ask, "What's the name of your book?" I had to get over that and gain confidence and take ownership of my title as a writer.
And I know the feeling of finally having of accomplishment. After having nonfiction and academic writing published, I can say I am a fiction writing with my new release Mother Wit: Stories of Mothers and Daughters of which I am a co-author, I have short stories published after years of submission.
Great post. Keep up the good work
12:54 PM, August 23, 2010

Carmelo Brian Valone said…
I have to agree for sure! I have been writing and or studying writing for years now mostly unpaid. Honestly, I feel like for the first time I am finally ready to try to get my fiction and or non-fiction literature published. Maybe I’m a fool but, I don’t regret any of the time I have spent on honing my skills. That’s what a real fighter does, he trains and trains, then he’s ready to kick some ass.

Herman Melville died penniless and a complete 'financial and artistic failure', does this mean he's not a 'real' writer?

Keep writing in every way, shape or form.