A Ride Through Central Park With Patrick Abdul 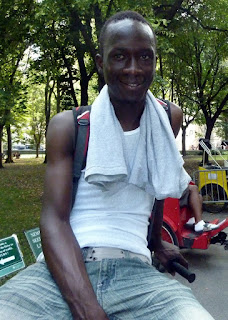 "You look like you need to relax. C'mon, let me drive you around the park."

"No thanks. I'll walk," I waved the lanky young man in a wife beater and jeans away without even glancing at him. I'd just finished a work-related event at the Time Warner Center in Columbus Circle and riding around on a bicycle taxi wasn't on my agenda. Only a couple hours remained till it was time to head back to JFK and board a plane home to Los Angeles. I just wanted to stroll down a shaded Central Park path and munch on the chocolate croissant I'd bought moments before at Fererra's -"America's Oldest Pasticceria".

The young man bounded ahead and turned to face me. "C'mon, it's a hot day... too hot for a lovely young lady like you to walk."

I didn't feel particularly young or lovely so I rolled my eyes at his flattery and pointed to the croissant. "I need the exercise."

I'll give you a good price," he persisted.

"How much?" I asked, pure curiosity driving the question.

He told me his price. I laughed in his face. He halved it. I said no. He took five more dollars off. I said no again and began walking away. The price came down five dollars more and two minutes later, I found myself in the back of his bicycle taxi. 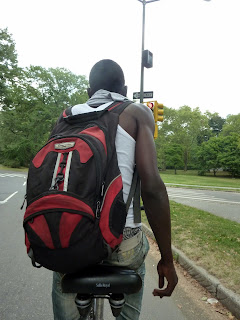 I felt guilty watching his lanky frame strain against an upslope in the path--all while I ate my croissant and sipped a cool drink.

He began pointing out the stone buildings peeking through the foliage. "That over there is where the Kennedys live. DeNiro has an apartment in that one." Then he'd give me an estimated market price for one of these apartments.

Tens of millions of dollars for one apartment and yet so many homeless in this world. The extremes of wealth and poverty bother me, so I wasn't exactly interested in experiencing the bicycle taxi version of Cribs --and I told him so.

"Just imagine how many people could have a place to live for the cost of one apartment," I said to his black and red backpack.

As we talked about poverty, its causes and its solutions, I keenly felt my privilege. After all, I was the one being driven around Central Park with a half-eaten chocolate croissant and a small notebook for writing down interesting observations resting in my lap.

And where do you live? I asked, changing the subject.

I knew from his accent that he wasn't Harlem born and bred. Further conversation revealed his homeland to be Burkina Faso. He was shocked that I knew where it was and that I knew a few tidbits about it--there's gold mining, they speak French, it's landlocked and it's next to Cote d'Ivoire. 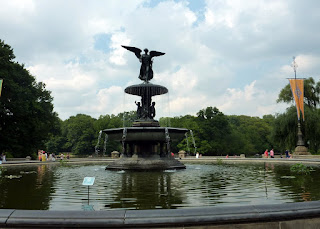 "I don't think most Muslims want to kill other people," I said as we stopped to view the Bethesda Fountain.

Abdul stayed with his bike taxi as I walked down the steps to the fountain alone. Lovers strolled hand in hand, tourists snapped photos of each other, and two children, heedless of their mother's yelling, "Get away from there! There's bacteria in it!" dipped their hands in the cool water and crouched alongside the fountain's edge as if planning to spring into it.

I found myself thinking of all the people I'd like to stroll around that fountain with, all the great conversations I could have, and how I felt slightly uncomfortable being alone in a place where almost everyone else seemed to be with someone else.

I walked up the steps to where Abdul from Burkina Faso waited. He had the taxi seat bench lifted and he was putting something away. "What do you keep in there?" I asked.

He moved aside and pointed to a jug of water and a small prayer rug. "Without either of these, I'll die. My body and my spirit."

I agreed, but told him that given the oppressive heat, it seemed like the water might be the more practical option.

We continued our conversation as we wound through the park. I heard about his ex-girlfriend -he left her because she started drinking and clubbing--and about how he's going to school.

Yes, Abdul's working on his degree and he's financing it by driving his bicycle taxi around Central Park from sunup to sundown every single day.

He hustles and makes enough money to pay for 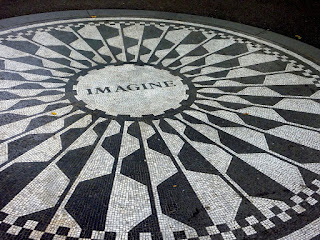 his tuition and to not have to work once school starts. That way he can just focus on his studies.

"Guys make fun of me for driving this taxi, the girls won't go out with me, and a lot of tourists talk down to me, like I'm their servant," he shared. "But I have dreams and in a couple of years, I'll have my B.A."

"Twenty-six. I hope I don't look older than that!" he joked.

The bicycle taxi reached the quiet shadiness of Strawberry Fields and I got out once more and walked on my own, thinking not of John Lennon but of life in Burkina Faso. Living there is clearly not easy, which is why Abdul is in New York City, but I couldn't help but wonder what the young black men I know would be like if they'd grown up there instead of the United States. Maybe if they'd grown up in Africa too, they wouldn't have had that drive, that spirit to achieve crushed out of them by the racism in our society that sets low expectations for them and systematically ensures that they don't achieve.

We sat and talked for almost half an hour after our official taxi ride was over, chatting about everything under the sun--and when it was time for me to head to JFK, he walked me back to Columbus Circle--generously letting me practice my mangled French on him along the way and waving off the jokes from his colleagues. "It's not like that," he yelled back in response to their hoots of glee. "She's just a nice lady. A nice friend."

Maybe it's silly of me but I paid him the original taxi-ride price he'd asked for. I'm still not sure what it was about his spirit that affected me so much--maybe his sincerity and his willingness to endure my nosy questions--but I figure a little more in his pot for school can't do any harm. I wish Patrick Abdul the very best of luck.
Email Post
Labels: Black Men Burkina Faso Central Park Columbus Circle Cote d'Ivoire extremes of wealth and poverty faith French I Love New York Muslim New York City

Britni Danielle of ThisSideOfTheWall said…
I couldn't help but wonder what the young black men I know would be like if they'd grown up there instead of the United States. Maybe if they'd grown up in Africa too, they wouldn't have had that drive, that spirit to achieve crushed out of them by the racism in our society that sets low expectations for them and systematically ensures that they don't achieve.
====

i was completely enthralled reading this. like, i haven't been SO interested in a blog post in a long time. i did not scan (as i mostly do), i read every single word.

Tafari said…
On my last trip in NYC, I had an interesting conversation with a Morracan immigrant who was about 24 that picked us up in his taxi.

We discussed his school, how he won his visa, going back home and his American experience. We could have talked for hours but that taxi meter was ticking.

I tend to open myself up when recieving services such as rides. I'm always interested to know about the driver, especially when they are foreign.

Your story was captivating and I'm happy that you dried along the way to take these awesome photos. I have to find that Imagine mosaic. So beautiful!
11:58 PM, August 01, 2010

nick said…
What a wonderful chance encounter, and what an inspiring young man, determined to succeed in life despite all obstacles. And it's so easy for whites like me to take one look at someone like that and assume all sorts of negatives. Particularly with the wife beater tee, lol!

Like Tafari, I always chat with people like cab drivers and hairdressers because I'm curious about their lives and whether they're succeeding or struggling. I hear a lot of revealing stories.
1:15 AM, August 02, 2010

Good grief; you are so compelling. I knew you'd pay his original price (or more) because he gave you so much more than a ride. He gave you an opportunity to reconnect to your humanity. And gracious woman that you are? You accepted.

Britni,
You are very kind. ;) I didn't tell him about it. I was tempted too but in the end, I didn't know how to say, hey, here's my site's address and I'm going to write about you!

Tafari,
Isn't the mosaic lovely? It's a replica of one in Pompeii and is a gift from Naples, Italy. - If you go in the park at 72nd and Central Park West and follow the path into Strawberry Fields, you'll find it.

I'm always curious and nosy about everybody! It drives my husband crazy. :)

Nick
It was a really nice encounter. I think it's too easy for all of us to look at people, particularly people of color, who work in service professions in a certain way - everybody has a story to tell and dreams they want to come true.

Professher,
Thank you for saying such kind things about my writing - glad to know you enjoy coming to visit me :). I think halfway through the ride I knew I'd pay him the original price. It just felt right.
8:43 AM, August 02, 2010

Toni Campbell said…
Beautiful story! How wonderful it is to not be like most Americans. We meet the most interesting people that way!
3:38 PM, August 02, 2010

On a limb with Claudia said…
I love the way you engage people and then can translate that engagement into words. Here is your real skill, your real God given talent.

Your passion for issues and capacity to engage is illuminating in the dark areas of our world. I'm grateful you are blessed with the capacity to translate into such gorgeous prose.
5:24 AM, August 03, 2010

Jennifer said…
Sounds like you got a deal even paying his original price. What a wonderful experience! Sometime we're too wrapped up in our own lives to realize what amazing people surround us. I bet that was the best taxi ride of your life!
12:19 PM, August 14, 2010

anjeee said…
a truly moving post about a beautiful experience. i love that you gave him is original asking fare.
9:41 AM, August 31, 2011