Last Night I Slept On A Chair And Table 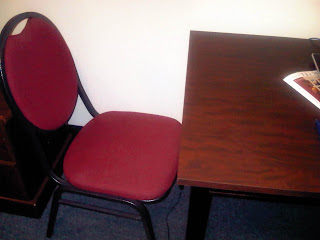 See that chair and table? That's where I slept last night.
No kidding, half the night I just laid my head down on the table. When that got too uncomfortable, I slid my feet down and out so that the back of my neck rested on the edge of the chair.
What brought me to such low levels? I'm in the Denver area for work and I chose the closest hotel to where I have to be this morning. Great deal... only $63.50 for one night -- and it earns an A+ in skeevitude!
Now, lets be clear, I'm not hotel diva. When I lived in China and traveled around in more rural areas, I once stayed at a place that cost the equivalent of $1 US. That was hard core for sure. But this... this is more like a cross between a bordello, a drug halfway house and a place you stay when you've been evicted.
The first sign this was going to be an adventure were the big banner advertisements hanging on the outside. Now I know, if a place advertises weekIy and monthly rates...RUN!

I come inside and questionable ladies in thigh high stockings and tons of makeup are hanging in the lobby. The guy who checked me in had tattoos on his fingers and his neck - but I can roll with tattoos. I mean, I live in LA, tats are everywhere.

And then the guy at the desk suggested that I should go in my room and lock the door - and not come out after 11 pm. Fabulous because it was 10:30 pm. Fabulous.

He also handed me a piece of paper with the hotel rules. In all my years I have NEVER seen "Vehicle repairs may not be done on the property" as a rule at a legit hotel, but sure enough, it was there along with, "Drinking alcohol is limited to inside the Guest Room only." Um, yeah, that's why there were people outside drinking and smoking when I got here.

Anyway, my room smelled really weird and the people next door were fighting, so I rang the desk and they moved me down the hall.

The second room still smelled weird but by then, the front desk was closed. I was out of luck for the night. I think the stockinged ladies of the night picked up some clients because moaning and banging came through the wall - but thankfully, only for 2 minutes. Whew, somebody lacks stamina!

The internet was through an ethernet cord - who in the sam hell still uses an ethernet cord??? And, just because they give you that cord, that doesn't mean the net will work. It went in and out and was so slow, I thought it was the year 2000, not 2010.

I was scared I'd catch cooties or worse from the bed so I stuck to the chair and was SO happy to make my escape this morning. Whew, I will be glad to head home tonight!

Jennifer said…
eEEWWWW. I can't believe you STAYED there!!! I'd have been in a cab on my way to the nearest Hilton in about 30 seconds!! You might have been able to get a deal on a nicer hotel that late at night. They often will discount the room to get SOMETHING from you instead of leaving it empty!
12:12 PM, August 14, 2010

Lisa MB said…
OMG... I had to laugh because I drive by a string of those establishments occasionally on the way to work. At first I thought, "who DOESN'T know that a 'weekly/monthly rates' sign means you don't want to stay there?"
But then I remembered the people who know this already are law enforcement, social workers or reporters who've had to interview sketchy people in sketchy places before.
You poor thing... [hands you a ten-gallon jug of hand sanitizer]
12:38 PM, August 14, 2010

Anonymous said…
Bless your heart! You run into some situations! I hope the bathroom was decent!
8:07 PM, August 14, 2010

Jen said…
Ugh... had nights like that. Glad you're OUT of there. OTOH, experiences are the spice of life, right? Just hope your back doesn't suffer. All that marathon training probably comes in handy for all sorts of things!
4:01 AM, August 15, 2010

nick said…
Like Jennifer, I think I would have been out of there pretty sharpish and into something more civilised even if it was pricier. Won't your employer pay for decent accommodation (and that means somewhere where a woman can feel safe)?
9:20 AM, August 15, 2010

CONGRATULATIONS ON SLEEPING IN THE CHAIR!!! Glad you made it through the night; glad you DID NOT SLEEP in that bed o' issues, to put it politely.

Now, would you please excuse me while I vent? You've touched upon one of my fave "eccentricities!"

Do you recall that scene in "To Wong Foo" when the "girls" transformed the drab room into a more fabulous pad? That's me re: cleanliness when I travel!

My truth: I can barely stand staying in even reputable hotels. It wasn't always the case. Over the years, I've seen too many specials re: what's NOT happening re: cleaning to feel comfort in a big name hotel at a hefty price. Why? Here's a classic, if you've not seen it:

My solution has led my friends to call me "Monk." I couldn't care less; I need to SLEEP and LIVE.

So, when I enter ANY hotel room? I assess whether there's a baseline level of civilization I can work with. I don gloves and clean. I bring a tub of disinfecting wipes and rub them over EVERYTHING. Oh, the hair that clings to sofas, chairs, door handles!

I glasses with SOS soap pads I've brought. Why? Check out this video; go to 2:58 to cut to the chase (although the whole is equally compelling):

I personally use shower slippers when I travel; however, I place the wipes in the tub and "skate" to clean it. Again: you'd be surprised at what's there and almost invisible to the eye.

Recently, I purchased a sleeping bag and used it for the first time a couple months ago. I may've looked crazy; I felt SUPERB. Check out this:

I won't stop traveling; however, when I am aware that people are being paid peanuts to clean our most disgusting places at an outrageous level ("x" number of rooms in only "y" hours)? I KNOW that they aren't giving their all. They CAN'T.

And my friends? They have begun to look forward to my "Mitigation" (one friend's name for my "service"). I may SOUND like I'm a nightmare to travel with; I'm not. I never ask anyone else to do this or bring the supplies; I always do it myself without a peep, complaint, or request!

So, now, when they travel with others? My friends lament that other folks don't, for example, bring wet wipes or incense for the bathroom, LOL!

Val said…
"Vehicle repairs may not be done on the property"

Ian Lidster said…
I would be more concerned about the 'other' rather than the cooties. I'd have slept in a chair, too. But just think, Liz, what wonderful material for the book to follow.
1:57 PM, August 16, 2010

SweetThang said…
OMG! And I thought I stayed in some triflin' hotels. But the weekly and monthly rates would have turned me off. Also if the desk guy told me to stay in and lock my doors after 11:00 PM, that would have told me that this is some place I don't need to be.

I have never been in a situation as bad as yours but when I went to Delaware, I stayed at a Best Western and there was nothing "Best" about it. We had to request another room because the room we stayed in had an ant infestation and there was a big spider hanging in a web over the towel rack. If that room was dusted on a regular basis that spider would not be hanging there. I know if I have to go to Delaware again, I will definitely not be staying at the Worst Western. I don't like to have to share my room with six and eight legged critters.
10:02 AM, August 17, 2010

Liz Dwyer said…
Jennifer,
I considered that - but seeing as it was only one night and the suburb I was staying in was kinda far out AND I was completely exhausted, yep... I just went for it. Sigh.

Blogging Queen,
Seriously! I wrote a looong review on the hotels.com site and sent them a separate email telling them this is NOT a hotel that they need to be advertising on their site.

Digal704,
I'm ashamed to admit I only washed up in the sink. I could not make myself a) take off my shoes or b) interact with the tub/shower.

Jen,
They sure are the spice of life! My back was alright but my neck... whew. It was SO stiff!

Nick,
The suburb where I was was kinda far out -and sometimes it takes me awhile to react to situations like that. It's like my brain turns it over and says, hey... wait a minute! Oh well. You live and learn.

Felicia,
LOL! I have to go to NYC next month and I'm scared because of the bedbug issue!

Professher,
OMG! Those videos! Now I feel like I have stuff crawling ALL over me. I never ever use hotel bedspreads but the remotes!!! I'd never thought of that. EWW!

Val,
I know! Just trifling to the nth degree!

K.Rock,
The next morning I was soooo happy to make my escape and head to a Starbucks!

Ian,
Locked up in my room with a chair in front of the door I only wanted to think about cooties. I definitely got a lot of creative fodder out of the experience. ;)

At first I thought the desk guy was joking - and then I realized, he was serious! AAGH!

heartinsanfrancisco said…
"Vehicle repairs may not be done on the property" pretty much announces that they are not dealing with an elegant clientele. Smart move on avoiding the bed -- so glad you didn't get bedbugs or even worse.
10:35 PM, September 06, 2010