The Curious Case of Los Angelista 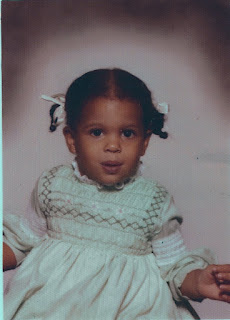 You know that Benjamin Button movie that's out? The one where Brad Pitt is born an old man physically and then his body gets younger as he gets older age-wise?

Someone call up Oprah because Benjamin Button isn't the only one on the planet aging backwards! Call it The Curious Case of Los Angelista, but I woke up looking like this! Can you believe it???

My transformation is especially shocking because today's my birthday. I'm supposed to checking out the crows feet around my eyes, bemoaning the age spots on my hands and cursing the never-ending California sun that caused it all. Instead, I'm touching baby soft skin with nary a wrinkle or freckle on it.

Gosh, to think that my sister told me over the phone last night, "Aw, man, Bunny (that's what she calls me)! You're getting old!"

Well, if only my big sis could see me now... I look like a one year-old! I haven't looked this fresh in years!

Admittedly, there are some drawbacks to this. For one, my kids are in total shock. They thought I was a new baby sister instead of their mother! Things are already getting a little bit out of hand because I've lost all credibility when it comes to telling them to do stuff. I'm worried they're gonna put me in time out if I tell them to pick their toys up off the floor.

They're threatening to buy a chocolate cake for me instead because they like chocolate better. Horrors!

Even though I can still type and read, which is miraculous in and of itself, I might have to have someone drive me to see the Benjamin Button movie later on today. I can imagine one time might pull me over in a heartbeat if they see me behind the steering wheel. Not to mention the movie is rated PG-13. Am I gonna need an adult with me to go see it? Will I need someone to feed me the carrot cake later too?

Hmm... I'm starting to hope that this aging backwards thing is just a one-day special, a little something-something to make me appreciate every wrinkle, freckle, age spot and gray hair on my head. I don't think I mind inching one more year closer to 40. I think I'll click my heels together and wish to look like myself again. I'd rather save the curious cases for the movies.

One year older and hopefully, getting better all the time. Yeah, I think that's just fine with me.
Email Post
Labels: about me aging Birthday Brad Pitt cake kids Movies Oprah

Kofi Bofah said…
I thought you were 255 years old according to your Profile.

Liz Dwyer said…
1969,
Thanks for the birthday wishes! I have been dying to see this movie for like two months. I can't wait!

Sharifa,
I guess I could have two kinds! :) Maybe I should get some white cake too!

Jennifer,
Thank you so much! It's such a gorgeous day here in Los Angeles. It's a perfect day!

NYC/CR,
You were feeling those ribbons, weren't you! :) Thanks for the birthday wishes!

Lisa Johnson said…
Happy Birthday! I'm looking forward to seeing this movie myself. Although, it may end up being on DVD. I hope you had a great day and lots of tasty cake! ; )
2:44 PM, December 29, 2008

Liz Dwyer said…
Jennifer,
I know! I was feeling anxious that I hadn't had time to write a post about it yet. But, I had to entertain my boys all day. No time... plus it was a GORGEOUS day here. Nice after the cold weather we've had.

Shiona,
Thank you! It's been good so far and can only get better.

April,
Gracias! I'm enjoying myself and hope to continue the revelries into the night! :)

Tracey,
I'm headed to see it tonight! YEAH! Thanks for the well wishes!

Anali,
I hope it's as good as I want it to be. I've always loved the short story. And yes, I've already had some cake but I'm going to eat more for sure! Thanks for wishing me happy birthday!

Cyndee,
Hey C-smooth! Thank you and I wish you were here with me. I could entertain you while you're laid up recovering! Love you too!

KathyR,
Gosh, I loved ribbons and bows as a little girl. Are there any girls out there who don't? And yeah, I've already eaten non-carrot cake so I'm looking forward to the carroty kind!

Jen,
So sweet to wish me happy birthday and you are SO right! When we're younger, we want to be older so we can do stuff. I'll take the wisdom and freedom any day.