The Connect Four and Boggle Queen 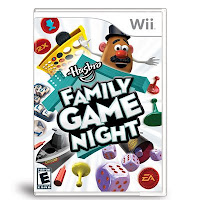 My husband is hiding out in our room, undoubtedly hanging his head in defeat, all because I totally smoked him at Connect Four. We played for, ahem, almost two hours tonight. He won maybe a dozen times. To rub my victory in, I've been dancing around singing Queen's, "We Are The Champions".

This is not the Connect Four you and I grew up on, with the checkers you can never keep track of and that plastic yellow grid held up by the blue sides. Nope, this is the Wii version, and it takes the game to the next level. You can adjust the game according to level of difficulty, set it so that columns disappear, and put a timer to work so that some people can't take a whole minute to decide where they're gonna drop their virtual checker. Really, isn't ten seconds enough time to figure out where you wanna move?

The game comes as a part of the new Hasbro Family Game night for the Wii. How'd I get it? Well, I was lucky enough to be a guest at the EA Games Winter Gaming Wonderland on Thursday. At the party, my boys were totally hooked on this cool Nerf N-Strike game but that wasn't really my thing. Fortunately for me, my youngest decided to wander around and he ended up at a gaming station playing Battleship. One of the very nice EA staff people was trying to help my him with Battleship, and he showed me the box... I'll admit, I tried to play it cool when I saw that the CD/DVD/whatever it is also had Connect Four. All I could think about was how I wanted to pry the Wii remote out of my son's hands, shut off Battleship and get a game of Connect Four going.

The stars aligned and I came home with this game as a gift! Clearly, EA had no idea what kind of can of worms they were opening when they gave me that game! Along with Connect Four, there's also Yahtzee, Sorry, the aforementioned Battleship...AND Boggle! My husband flat out refuses to play Boggle with me because I used to read the dictionary for fun. Okay, I'm a nerd! I still read dictionaries for fun. So, I just set it for one player and before I knew it, I was in Boggle heaven!

I was actually supposed to go to a party tonight but skipped it because I'm running the City of Angels Half Marathon in the morning. I didn't miss being at the party though because I was home with the family, chilling out and playing games. I have such good memories of doing that as a kid and it's nice to see my own boys getting old enough to be able to play too.

Anyway, I am now crowning myself the Connect Four and Boggle Queen of Los Angeles. I'm sure my husband will want a re-match sometime tomorrow afternoon after I'm finished running my 13.1 miles. He'll probably be thinking I'll be too exhausted to beat him again. Pfft! I'm sure my crown will remain intact!
Email Post
Labels: Connect Four Family Games nintendo Running Wii

Jen said…
It sounds like a great deal of fun! I love playing games. One of our faves right now is a card game called Quiddler. If you were another of those "read the dictionary" types, you'd love it. It's too advanced for your boys right now, but maybe you can trick your DH into playing? ;-)
4:39 PM, December 07, 2008

Miriam said…
You are lucky you can do those kinds of games.

My husband and I used to play checkers, chess, etc as the evening came. But the games brought out too much competitiveness in us.

Interestingly, it was also a time of passion and lots of fighting in our home.

Shiona said…
That game looks so fun. Alas I can barely play with some of my family members because they are so competitive. It's pretty sad when a game of Guesstures gets so heated.
8:17 PM, December 07, 2008

Liz Dwyer said…
Jen,
It was SO fun! I was telling my sister about it this morning and she was laughing because we used to play connect four for hours when we were kids. I had a re-match with my husband tonight and I cleaned his clock once more! Quiddler sounds interesting. I'll have to look that up.

April,
Haha! What's the saying? If you don't have anything nice to say, don't say anything at all. And so I can't say anything else about that PTA meeting. But I really would like a new principal at my kid's school. Sigh.

Miriam,
It's weird how the games totally do bring out the competitiveness in each of us. I used to be a hyper competitive person and I've managed to tone it down considerably over the years, but sometimes it comes creeping back out. Our society certainly isn't too keen on cooperative games.

Shiona,
I have childhood memories of drama blowing up during a game of Monoply... usually due to someone trying to steal from the bank! :)
9:56 PM, December 07, 2008