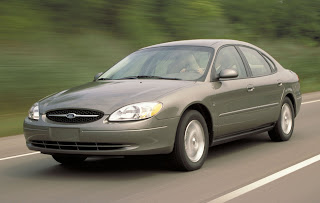 I went to my local gas station this morning and, SHOCKER, gas was only $1.73 a gallon. That's almost as inexpensive as it was back when I first moved to Los Angeles.

Ah, the $1.35 a gallon days, the days when I volunteered to drive all my friends everywhere. The days when I'd say, "Sure, I'll drive all the way down to Long Beach to pick you up and then drive out to the Valley to get someone else!"

Those days were over well before gas was hitting $4 around here. Remember those prices? That was only a few months ago, you know.

So, I put in $20 and actually got more than two drops of gas for my money. I felt like singing "Joy to the World!" or "Santa Claus is Coming to Town"! But, as I stood there watching traffic zoom by and waved off the guy offering to wash my windows for me, I got to thinking about Detroit and the auto company bailout.

Confession time: Yes, this is a union household and I am outraged that some of our politicians are trying to use this bailout as an effort to break union influence, but I've never owned an American car. I've had a Toyota Celica, a Volkswagen Jetta and a Nissan Altima.

But you see, my Altima is 11 years old and still ticking, knock on wood. I sold the '85 Celica for $500 when I left Chicago in '97 and my Jetta got crashed into in 1999 by a woman in a full sized van who ran a red light. But while I had them, both were great cars.

I wonder though, why have I only had foreign cars? Sure, I've grown up hearing about how American cars bite the big one. But really, I'm one of those buyers who tends to pick a car based on what's cute, affordable and what Consumer Reports says about it. Ford Tauruses were not cute back in the day. SUVs have never seemed cute or affordable to me. Plus, I hate driving big, clunky cars that die after 3 years, and it seems like Detroit has made quite a few of them.

I'll probably be in the market for a new (or newer) car sometime in the next year and I could totally be open to an American made car. But I want something that looks good, is affordable, gets good gas mileage, won't die before it's paid off... and did I mention looks good? I mean, I do live in LA. I don't want my car to look like the bastard child of the Ford Taurus.

I want Detroit to come back and make it happen. Why can't they make super cutting-edge cars that are the total package? Why can't they build a whole fleet of affordable, energy efficient cars and do that while providing a living wage to their employees?

I say yes they can. But will this now failed bailout be the answer to make it happen? I read an interesting piece by Michael Moore where he suggests the government take over GM to make it happen. His reasoning is two-fold. One, "You could buy ALL the common shares of stock in General Motors for less than $3 billion. Why should we give GM $18 billion or $25 billion or anything? Take the money and buy the company! (You're going to demand collateral anyway if you give them the "loan," and because we know they will default on that loan, you're going to own the company in the end as it is. So why wait? Just buy them out now.)"

That makes a lot of sense to me, especially when he goes on to say, "None of us want government officials running a car company, but there are some very smart transportation geniuses who could be hired to do this. We need a Marshall Plan to switch us off oil-dependent vehicles and get us into the 21st century."

That's because gas is surely not going to be $1.73 a gallon forever. We're all mellow and placated now that the price isn't bumping up against the $4.00 mark, but what goes down can surely go up.

Or disappear. Those Peak Oil theorists weren't sounding too crazy a couple months ago, were they?

In the meantime, there are a whole lot of Americans involved in the car industry who are stressed about their jobs and their future, all because of political wrangling. The politics is keeping us from a real solution because we're so caught up in ideologies and "sides". The only "side" that matters is the human side, not the corporate side or the political side.

April said…
It certainly sounds like a more financially prudent plan, but then what? Who will run the companies? I love Michael Moore, but he sometimes frustrates me with his half-answers.
10:32 AM, December 12, 2008

allison sara said…
I go to comment, and then I find myself stuck between no one wants these cars any more, and people definitely want those jobs.
11:01 AM, December 12, 2008

littleorangekitchen said…
The thing that gets me mad (Union household here too) is that the banking industry (white collar) got 700 billion with no real conditions and no stipulations about keeping people in their homes...while the auto industry (blue collar) is asking for 14 billion...a fraction of what the lending industry got and they can't get it. Not a big fan of bailouts overall, but something is wrong when people are actually demanding that the workers who stand on the auto assembly lines to take pay cuts, but nothing was written into the last bailout about lending industry executives and their 15 million dollar (no joke) bonuses!
2:25 PM, December 12, 2008

Anonymous said…
I drive the Bastard Child of the Ford Taurus: The Escort. I hate it. I want a Toyota Matrix or a Pontiac Vibe. Those Yaris things look pretty funky too.
3:10 PM, December 12, 2008

Anonymous said…
Los Angelista,
I just refuse to spend much money on cars anymore. Most of it is for show anyway, for everybody else lookin' at ya (like I care). I've owned a succession of junkers since the "ex" ran off with the (then) new car. Kids have hated it, slinking down in the seats so as not to be seen in my 'ride'. Present jalopy is a clanked-out Tempo, with 2 working windows and a transmission missing most of 1st and part of 2nd gear; I have to shift the automatic tranny 'manually', so I can get enough rev's so it'll engage anymore. Ahhh, ‘American iron’ at its best! Kids claim its part of their Dad’s “transition” to being a Nickerson Gardens resident; mean kids anyway!
4:20 PM, December 12, 2008

Anonymous said…
The guy offering to wash your windows could probably use some spare change. Ahh, a wave from you is good enough. Lucky guy.
8:41 PM, December 12, 2008

Shiona said…
I have always preferred Toyotas or Hondas myself. They have great gas mileage and are in it for the long haul. My first car was an Oldsmobile. It was like a 8 years old and I was able to drive it for four months. That is definitely not cool what they are trying to do to the unions. I'm all like what are they mentioning the UAW for?

Jameil said…
interesting theory. i usually just ignore him. i gawk at the falling gas prices on the regular. LOVE IT! but i am not delusional in thinking they're here to stay, either. i just keep waiting for them to start skyrocketing back up.
2:04 PM, December 13, 2008

Anonymous said…
Buy American!!!! My last three cars have been American and they were cute, affordable and dependable. Funny how you won't shop at Walmart but you buy foriegn cars. Ok that was mean but you see the irony don't you?
9:06 AM, December 15, 2008

Miriam said…
My last car was a (gulp) Dodge Spirit. Okay it served me well.

But American cars have got to do good in order to compete. We can't just buy out of principle in a capitalistic country, right?