Los Angelista: Not Bought Off By Blagojevich

Even though I was born in the State of Illinois, I would like to go on the record as saying that newly indicted Illinois Governor, Rod Blagojevich, has absolutely nothing to do with this blog. I know he was allegedly trying to get a grip on the Chicago Tribune and be a shot caller on their reporting, but this blog is not Chicagoista, it's Los Angelista! Besides, our Governor is a body builder, turned actor, turned politician who likes to drive Hummers. I'm not even sure if Arnold would have it in him (or know how) to be as crooked as Blago. 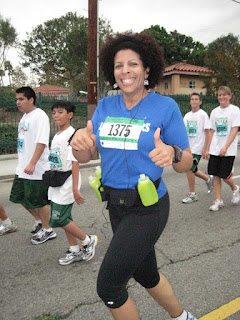 Also, Blago has absolutely nothing to do with either my ongoing marathon training or this past Sunday's half-marathon run. I, Los Angelista, am proud to say that I hung up on Blago when he called to tell me that if I gave him $500K, he would not only find somebody to wear my timing chip and run the race for me, he would also put my name in for the senate seat vacated by our President-Elect.

When Blago sent text messages insinuating that unless I agreed to all his financial demands AND got his wife a job, he would somehow get me, I was quaking in my boots! Then I remembered that I could probably outrun both of them.

Admittedly, I was quite nervous the morning of the race and even dropped a glass in my kitchen during a poignant freak-out. The sound against the 5 a.m. silence was shocking, and there I was in my bare feet, surrounded by shards of glass. Clearly, a Blago intimidation tactic!

Let's not even get into the letter I got in the mail on Saturday saying that hired thugs would be waiting to make running up the up-sloping Hyperion Avenue Bridge doubly difficult. Thankfully, Blago's goons were beaten away by the fantastically nice Noel Alumit who waited at the top of the bridge to take the above picture of me!

So, please rest assured that there is no pay for play going on with this former Chicago resident. Undoubtedly, I would like more pay and more play but I'll pass on the kind that Blagojevich is selling.
Email Post
Labels: Chicago corruption Dumb People Los Angeles pictures Politics Running

Dirty Red said…
Congrats on your Marathon. To me there is nothing mini about it. This is a big step for you, and I am glad that you stuck with it. I am not training for a marathon, but I do try to keep this already sexy body sexy. You give me motivation to keep going.

the last noel said…
Ha! I'm glad the pic was put to good use! You looked great. After 7 seven miles, you show no sign of pain.

Lisa Johnson said…
Congratulations on your run! This whole Blago thing is crazy. We've had a bunch of state politicians here in Mass. arrested in the past few weeks from undercover stings. The amount of corruption out there is mind boggling.
4:21 PM, December 09, 2008

I believe that most politicians are dangerous and dirty, which is why so many people seemed to recognize that Barack Obama was indeed a horse of another color.
4:27 PM, December 09, 2008

Liz Dwyer said…
Dirty Red,
Yep, this was "only" a half-marathon but it definitely gave me some motivation to keep going as well. We have to do whatever we can to keep ourselves in somewhat decent shape. One of my biggest fears is having a long term illness, something that doesn't kill me but has me laid up in an unwell state for awhile.

Noel,
The SRLA kids were hilarious! I'd heard mixed things about running with them but they made me laugh a LOT. I also witnessed a couple of their epic wipe outs. They'd just bounce right off the ground and get right back to truckin' along.

Yes, putting the picture to good use. Absolutely! :)

Anali,
Thanks for the congrats! Yup, the corruption is insane. I tend to think most politicians do stuff like this at some level, but this guy is a little psychopathic with his corruption. So sad.

Heart,
Thank you! Thank you, for the congrats! :) One of the saddest things was seeing how hopeful some of the media seemed this morning that Obama was somehow tied to this. I really hope there's no association at all. And I hope Senate Candidate #5 is not Jesse Jackson Jr.

Daniel,
LOL, I was going to post about it yesterday but I ended up taking a day off from pretty much all technology. Took an hour long walk in the morning, went to lunch with my husband, and then ended up being out of the house all the rest of the day doing stuff till around 8 PM. I went to sleep early, at around 9.

BUT, that said, I finished in 2:49:59. Did a 4/1 split, although I walked for maybe four minutes at one point with someone in my group who wasn't feeling well and was a bit winded. It felt more important that all of our little posse of six get through the race. In turn, they were nice when I stopped to kiss my family. And your advice about the port-a-potty was spot on. The Garmin worked great... I didn't pay too much attention to it, especially at the end. Oh, and I cheered like crazy when we passed every mile marker! It was just great! Now I have to figure out which marathon I'm doing! :)
7:59 PM, December 09, 2008

Shiona said…
Goodness I think I would still be pretty lazy after running that much. That is a great time!

I could not believe what I was hearing when I heard about Governor Blago. That is just crazy!
9:09 PM, December 09, 2008

Yeh, Chi-town, your Hometown, should rename Madison Street Governors Row instead of Skid-row, or maybe this is how it all got started...centuries of corruption...U.S. Attorney Patrick Fitzgeral is our very own Elliot Ness.

Well at least our new Prez wasnt in the loop, literally, which was a big complaint at first ~

Ian Lidster said…
Good girl. I knew you were pure of heart and 'untaintable' by sleazy politicians. Congrats on your run and I love the photo.
10:10 AM, December 10, 2008

DJ Black Adam said…
Congrats on the marathon, glad Blago didn't pay you off to wear a Blago for Ambassodor to Tahiti t-shirt!
11:10 AM, December 10, 2008

Anonymous said…
Well there is probably room for another thug in the Yugo mafia that dominates in my part of the world, he would fit right in.

Unknown said…
You look so energetic in that photo. Just smiling. Like everything was smooth sailing!
7:08 PM, December 10, 2008

Liz Dwyer said…
Shiona,
I know some folks are speculating that Blago is bipolar or suffers from some sort of mental illness. Could be.

1969,
He sure is an idiot, isn't he? Such a shame. You know, the race wasn't horribly difficult for me. It was a good sort of difficult and I liked how that felt, especially when I got to the downslope of a hill!

Houseonahill,
Thank goodness Obama wasn't in the loop on this, but that doesn't stop fools in the media from going through the whole, what did Obama know and when did he know it madness.

Ian,
Sleazy politicians are my sworn enemies! Really, I don't get how this guy said all this stuff and KNEW he was being wiretapped! It's insane!

DJBA,
Haha! Nope, although I do have some bills that sure could use the $$!

Sharifa,
Girl, north and northwest sides of Chicago, the folks from the old Eastern Bloc nations try to get their gangster on. It's crazy!

Thanks for saying I looked hot! I think my hair is finally long enough to pull back so I may do that the next race. I was looking a hot mess, hair-wise, at the end!