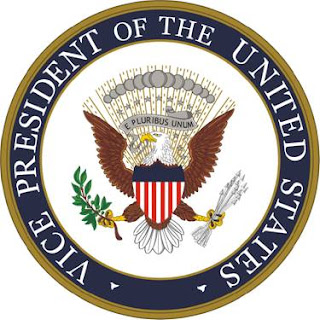 Are you on the edge of your seat, biting your nails with anticipation because Barack Obama is going to announce his pick for Vice President sometime in the next few days? Are you so anxious that you even signed up for text message notification?

Well, if the anticipation is killing you, look no further because, ahem, I happen to already know who Obama's pick is going to be.

Nooo, it's not going to be Bill Richardson because we don't want the heads of the so-called average, working-class-white American to explode en masse. I mean, a black/biracial guy AND a Latino? Uh, folks are already freaking out over the supposed lack of a white majority by 2042 so this combo is NOT going down.

By the way, how much do you want to bet that someone somewhere is going to start some sort of movement to encourage white women to get off the pill and start having babies? And can I also say that I'm confused about black folks' almost zero growth in popluation even though we're supposedly the ones with 17 kids by 10 different guys, right?

Anyway, back to the VP thing...

It's not going to be that Hillary Clinton because, well, "Shame on you, Barack Obama!" is still vibrating in folk's heads. It won't be that Kaine guy because his name is a tad too close to "cocaine", and, well, Obama doesn't want to remind the American public about that. And noo, it's not gonna be Biden because, well, career politicians do not equal change.

Are you stumped? C'mon, think outside the box...

Michael Phelps, you say? Hmm... Eight gold medals is impressive. We know he has "international experience" since he's been all the way to China. He's disciplined, America loooves him... But it's not him!

Alright, alright. I'll give up the 411. Yours truly, Los Angelista, is going to be the next Vice President of the United States!!!

I know! It's a shock isn't it? But after after his little visit to that Faith "Forum" on Saturday night, Barack was feeling a little annoyed with McCain not being in a supposed "cone of silence" like he was supposed to be. Just as our dear Rocky was mulling over how unfair and unethical it was for McCain to allegedly have access to the questions ahead of time, Michelle yelled from the bathroom, "Hey, Barack, will you look up something for me?"

Before you know it, Rocky was doing a little blog searching for his wife! He googled "How to straw set hair" just like a bunch of other folks do every day and lo and behold, he landed here at this very blog! OMG, exciting, right?

Next thing you know, he was reading through years and years of the stuff I've written on here and boy oh boy, he got David Axelrod on the phone in a heartbeat and they began to peruse my site together.

International experience? Check
Did not support the Iraq War? Check
Educated? Check
Insomniac (so will work hard)? Check
No drug use or DUIs? Check
A woman? Check
Can take advantage of new media? Check
Has worked in low-income communities/knows about the needs of everyday folks? Check

And then Barack found out about the Depeche Mode obsession! Months ago I wrote that I was taking myself out of POTUS contention because of the Depeche Mode thing. I figured it was just too out there, especially if folks saw the video for "Personal Jesus". No amount of explaining that that the song's actually about Elvis would've helped.

But, let me tell you, Depeche Mode was actually my ace in the hole!

You see, I was perfect until the David Axelrod saw that I describe myself as your average Black/Irish Midwesterner.

Axelrod was not psyched about that. Not at all. "Barack, you can NOT have someone else who also has African ancestry on the ticket with you! Sorry. America can barely handle YOU! She would've been a great pick though."

But then, Obama pointed out that the Depeche Mode thing set me apart from all other candidates, saying, "We need a VP who dares to be different! Has Kaine said he's gonna run a marathon in a Depeche Mode outfit? Biden? No! This woman is the epitome of change we can believe in!"

And so, they sent me an email asking if I'd be down for the cause! They even promised they'd throw in front row to the next Depeche tour if I'd agree to join the ticket.

I know, it sounds totally crazy, right? But believe me, you'll be getting a text message with my name on it any minute now! Get ready for an Obama/Los Angelista sign on a lawn near you!
Email Post
Labels: America Barack Obama Black people Depeche Mode I know you think I'm crazy after reading this presidential candidates presidential elections

Shiona said…
You do have the qualifications. I signed up for that text message thing too so I will be eagerly waiting by the phone.
4:47 PM, August 18, 2008

Liz Dwyer said…
Jameil,
I'll put you in as my chief of staff! Thank goodness you're ready because the rest of the world might be a little freaked! ;)

thailandchani said…
Well, geez! I guess that means you won't be posting anymore? :)

I am curious who he's going to pick.. but I'll probably hear it on CNN like mostly everyone else.

Liz Dwyer said…
Chani,
Thankfully, they've agreed to let me keep on posting but I have to have all my blog posts vetted by the Secret Service first.
9:36 PM, August 18, 2008

Andromeda Jazmon said…
I need one of those signs right now! The woodchucks totally tore up my first Obama sign. Your name on the ticket would be so much better.
4:39 AM, August 19, 2008

Jen said…
And we'd have some truly good campaign music!

Liz Dwyer said…
Cloudscome,
Woodchucks? Oh no! I hate to imagine what they'd do to a sign with my name on it! ;)

Unknown said…
You've got my vote! Guess we know who will be visiting the White House as the Official Vice Presidential Entertainment!
10:07 AM, August 19, 2008

Liz Dwyer said…
House,
It'll be plenty of fodder for the mainstream media since Depeche are Brits. I'll be labeled as un-American.
12:46 PM, August 19, 2008

heartinsanfrancisco said…
That will be the best-looking ticket in the history of the United States.

And that's what we really care about, right?

But Michelle will have to straw set her own hair because between Depeche Mode and your VP duties, you'll be awfully busy. Just let her down easy, ok? After all, you'll need her to babysit the boys along with her girls while you're doing whatever VP's do. (What DO VP's do, by the way? I've always wondered.)
3:38 PM, August 19, 2008

Liz Dwyer said…
DJBA,
Hahaha! Well, seeing as how the Iranian government has a plan to exterminate Baha'is that would make Hitler super proud, uh, nope. No radical Islam over here. But you bring up a good point... I wonder if the campaign has noticed I'm not a Christian?

Sigh, if you see another name when the official announcement comes out, you'll know that they chickened out on me due to religious concerns. :(

Heart,
Isn't that the truth, sadly enough! I'm not so sure what VPs do but I'm sure Obama's looking for someone who'll do anything other than looking like Darth Vader (our current guy)!
7:44 PM, August 19, 2008