I've been up since around 4:30 AM. I had a terrible nightmare -- so bad that I fell off the couch and onto the floor. Yes, I know. I fell asleep on the couch, in my clothes, which is enough to make anybody have a bad dream. This one was no average nightmare though. It was such a bad dream that I threw up after I picked myself up off the floor.

I tend to have very very vivid dreams, so when they're good, they're great. But when they're bad, they're craptastically, Satan-is-on-the-doorstep bad. They freak me out because, the thing is, I don't have nightmares all that much so I'm left wondering, what the heck did that just mean? I'm a little calmed down now though. Tired, but better.

AND OH WOWZER! Forget my bad dream! Talk about someone's horrible reality... I just had to call the cops because some random couple that lives across the street just got into a fight. They were in an SUV, parked across the street and initially the woman (in the passenger's seat) was hitting the man (in the driver's seat) and yelling at him. But then the man just started wailing on her and then the woman started screaming like crazy. Unfortunately, I don't think the police will catch them because they sped off (with the woman still screaming and being slapped) and I couldn't see the plate number on the vehicle.

Maybe I need to go back to sleep and start this day over? Or maybe I'll think about my weekend because it was a good one! Saturday, I pretty much spent the day in Santa Monica. I went out there for my long training run (only three miles, not too bad.) Then I went back out there in the afternoon to go to the beach. 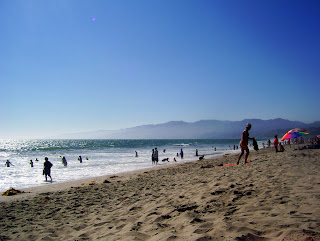 The water felt great and the waves were really strong because it was quite windy. They were so high that when I was in water up to my waist the waves were crashing over my head. It was fabulous.

The funny thing about Santa Monica is that you have all these chi-chi people, especially all the Europeans that like to come over and get sunburned, but then there's also a big homeless population and a good share of criminal/hustler types. Like, why was this totally scraggly and weird woman rolling up on me in a public restroom along the beach and asking, "Do you know where the water fountain is?"

The water fountain was right outside so I figured she was either 1) trying to sell me some drugs 2) trying to mug me or 3) just plain crazy. So I pretended I didn't speak English so that I wouldn't have to engage with her at all. That's definitely a tactic I'll try again because the woman who spoke English back to her got harassed to no end!

Moving right along, yesterday we went to a screening of the new animated Star Wars film. It's called The Clone Wars. It was alright. In my humble opinion, not quite as good as the mini-series done by Genndy Tartakovsky, but I seriously don't think my enjoying it is the point. 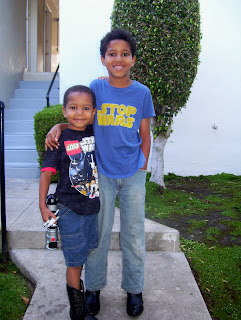 However, my son's enjoying it and getting hooked on Star Wars... well, cha-ching right there, folks. A friend got me tickets to the screening and let me tell you, my kids got decked out in their Star Wars and Stop Wars t-shirts, light sabers, and cowboy boots at the crack of dawn! And the movie? They loved it. As I looked around the theater, most of the other attendees were male and were the stereotypical X-Files/Star Trek/I Was Tetris Champion of the World types. Will that be my boys when they grow up?

LAPD just called me back to ask if the arguing couple is still there. Uh, nooo, they drove away while I was on the phone with your dispatcher and that was a half hour ago. But I'll bet that car will be back in this neighborhood this evening. Let's hope that the girl isn't with the guy. Let's hope that her absence will only be because she's decided to leave him.

Anonymous said…
Defnitely, go back to sleep and start the day over. HOpefully wih a good dream this time and ni fighting couple.
3:29 PM, August 11, 2008

Shiona said…
I'm sorry your day started off with a nightmare and a fighting couple. At least they called back. I remember in Vegas my upstairs neghbors were always fighting like that. I called the cops it took them like two hours to show up. Then the girl started going off on me. I was just trying to help you out. Don't fight and they don't have to come. On a good note actually being by the water is great, the rest of the beach is quite interesting.
5:59 PM, August 11, 2008

My mother, all 84 years of her bless her soul, had this to say about Star Wars last night:

"Have you seen the Dark Knight?"

"It's really been huge. It's been at the top of the box office list for three weeks now."

"It's absolutely huge. They're talking about Oscars and everything. Did I tell you it's been the top box office draw for three weeks?"

"Yes, those Star Wars movies have become quite the thing."

Allison Miranda said…
I lived in an apt. complex where the neighbors below me constantly fought-mom beating the (adorably cute) kids, dad beating the mom. Such a dilemma, b/c if you do call the police, the abuser/abused gets upset...good luck and be careful.
7:12 AM, August 12, 2008

Liz Dwyer said…
Shiona,
It seems like at least once a month there's a screaming match going on somewhere in our neighborhood, but folks full-on beating on each other like that is much rarer, thankfully. And going to the beach was awesome. If I have time this weekend I might go back.

Jen,
I hope they stay away, too. Last night I dreamed that I was taking a road trip to Mexico, so that's not so bad! And LOL, about your mom's Star Wars/Dark Knight convergence! That's really funny. Love your mom! And nope, no Dark Knight for my boys for many moons to come. Crazily enough, when I saw Wanted, some other folks had their little kids in there. I couldn't believe it.

Randi,
Folks do get upset but the good thing here (at least in my neighborhood) is that at least the police won't tell them who called. That hasn't always been the case in places I've lived.
9:13 AM, August 12, 2008

Call Family said…
Jason's got a "Stop Wars" t-shirt and people always do a double take and smile over it. I like the way you put that..."going old-school" on the boys-I have that inner voice that I suppress frequently.
1:23 PM, August 12, 2008

Anonymous said…
Los Angelista,
I left you something about your decision to do a marathon way, way back (“old school”, lol?) in the post about the Pink shoes. You might want to read it…
It is written in your best interests, really.
And, snobbery aside, it’s not running a marathon if it’s over 3 ¾ to 4 hours…
I like reading all the rest; interesting perspectives…
I DID laugh over the comment about your husband having the “black man’s curse”, girls with high-yella skin and “good” hair, lol. Sounds like the crap I deal with my daughter about and all this “Beyonce” preference. Funny, guys from high school used to tease me about takin’ their cast-off’s, the girls too dark and nappy for them, LOL!!!
SWD
1:26 PM, August 12, 2008

Liz Dwyer said…
Jameil,
Yes, the nightmares do definitely suck. Keep your training up. You're going through lots of changes/stress but as long as you keep trying, your body will bounce back once things get more normal for you.

Carmen,
I love that t-shirt, especially the back! And I have yet to go old-school on them but I threaten them with things like spanking them with a vacuum cleaner hose. The threat of it sends them into peals of laughter every single time and then they beg me to spank them! It's a little surreal. Crazy kids!

SWD,
So I hunted back to the Dark Ages of this blog and check out your comment. Sorry that I totally missed it before. It was right before I left for my trip so that's probably why. Anyway, I hear you on the concerns and it's all stuff I mulled over. I've done a 5K before and done a couple of fun walks. But I'm going for Jeff Galloway's method so that I don't have to totally kill myself and I'm going to be running some 5K's, a 10K and a half marathon in the buildup to it. It is a bunch of time but I don't mind spending that much time on something that I really want to do and is good for me. It may take me 5 hours. I'm not sure yet. I don't really have a time goal. I am worried about if it's a really hot day because I just don't do well in heat, but we'll see. I'm going for it. Oh, and my husband... let me tell you, there was a certain point where I was looking through one of his photo albums and realized, jeez, almost every single one of his girlfriends looks a certain way. It's more than a little strange.
6:36 PM, August 12, 2008