Sometimes insomnia means that I'm awake when yet driver drives over the top of our hill and crashes into the parked cars across the street. 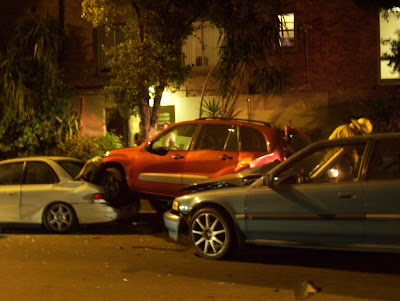 I was up watching the X-Files when I heard a car's tires screech and then an incredibly loud crash. I didn't even look out the window before dialing 911 and while I was on hold I ran downstairs to check out what was going on. I went outside to get a better look and I could hear the driver trying to turn the ignition over and then he swore and got out of the car. You'd best believe that I ran back into my building because no one else had made it outside yet and I had no idea how intoxicated this guy was, if he was carrying weapons, if he's a 3rd striker or what. I know I can be paranoid sometimes but heck, desperate people who are trying to get out of a bad situation will do crazy things, like run or try to shoot a witness.

Next thing I know, a few of my other neighbors began to trickle outside and this one guy dressed in a Bail Bonds t-shirt comes running over, yelling about how his car is totaled. I thought he was going to kill the driver of the blue car! He was furious!

Then the driver began trying to pull somebody out of the car. Everyone began yelling at him to leave the person alone till the paramedics came, but he wouldn't listen. He got this girl out of the car and dragged her over to sit on the steps of my apartment building. My goodness she was lucky.

The LAFD arrived at first to make sure they were okay and then the LAPD arrived. Me and all my neighbors were standing around waiting for the police to give the driver a breathalyzer test from the moment they arrived. But instead one officer talked to the driver for a good 5-10 minutes before they started having him walk in a straight line and touch his nose and all sorts of other stuff. Finally the officer had the guy turn around and they cuffed him.

I'm glad he got arrested because one of my neighbors was all, "If they don't give him a breathalyzer and arrest his ass, how about we administer a l'il street justice?" and folks were all, "Yeah!! Let's do it!"

Um, nooo people. I know we are all sick of intoxicated drivers hitting stuff in our neighborhood but vigilante justice isn't the way to go!

After the guy got put in the back of the squad car, I turned and saw the woman who'd been the passenger still sitting on my steps with her head on her knees. I asked her if she had someone she could call to come get her. That poor girl was sooo out of it. "What? Why do I need to call someone?"

"Because your friend just got arrested and you need a ride home."

"He got arrested? Oh. That sucks."

It's what he deserves. But of course, I didn't tell her that, even though everyone else was cheering as they put him the squad car. I hope she thanks her lucky stars that she's still alive.

Now there's a tow truck out there trying to get the red suv down off the white car. Seriously, what will it take to get folks to stop driving drunk?
Email Post
Labels: drunk people LAPD Los Angeles neighborhood Neighbors police

Anonymous said…
I despair of drink-drivers, they just refuse to understand the concept of social responsibility. Even if they run someone down, they still try to excuse themselves. Someone should develop a gadget that senses drunkenness as soon as the driver gets into the car and immobilises the engine.
1:34 PM, August 22, 2008

Shiona said…
That crash looked pretty bad. I would've wanted to do some street justice if mty car had been in that. I wouldn't have actually done it though. You would think being so close to death would stop some drivers but unfortunately causing a death and serving jail time seems to be the only thing that does.
8:49 PM, August 22, 2008

Liz Dwyer said…
Nick,
I definitely think a gadget that senses drunkenness would be a great idea but I suppose there are those that feel like car manufacturers don't need to have anything to do with keeping people safe. It's the individual's responsibility and all that, which is TRUE, but in the meantime...

Noel,
It was a pretty bad one and they were both SO lucky to just get to walk away! Whew.

Shiona,
Yes, four cars got damaged, three pretty severely so in terms of property loss it's bad, but thankfully, no one lost their life. I'd rather have a drunk driver hit parked cars than hit a car full of innocent people. I wonder if he will serve jail time or not. It seems like the sentences aren't long enough for DUIs.
9:45 PM, August 22, 2008

DJ Black Adam said…
Perosnally, I think Drunk Drivers should be punished with attempted murder or criminal negeligence whenever they are caught.

3 year minumum sentance as opposed to the fine / income game munincipalities play with them.
7:36 AM, August 23, 2008

Ian Lidster said…
I get torn on this one. Personally, I'd like to see zero tolerance for any alcohol level at all, like some European countries have. That, and some really brutal penalties.

Anonymous said…
Dayum, that was a close call. I hope the passenger ws treated for shock cuz she wasn't making much sense.
6:17 PM, August 23, 2008

heartinsanfrancisco said…
How awful. I see more drunk driving all the time and it scares me to death. (No pun intended.) I second Nick's suggestion... a car with a built-in breathalyzer.

Liz Dwyer said…
DJBA,
Yes, the sentencing variations depending on what judge you get are ridiculous. Mandatory minimum sentences should be enforced. Nowadays though there are some folks who don't believe a DUI is that serious because you might only have to serve a couple of days.

Marsha,
I wish you had gated parking. Every time this happens I am so glad I don't have to park on the street.

Ian,
Is that how it is in Europe? I had no idea. I think that's very smart. I get nervous going out at night on the weekends because I worry we're going to be hit by a drunk.

You are so nice to give me an award!

Heartsandflowers,
No, they barely paid any attention to her. She probably was in shock. I thought she was just drunk but I'm sure she was partially in shock.

Heart,
It scares me too, especially because we live so close to Hollywood and there are so many clubs/bars all around.

Liz Dwyer said…
Miriam,
I always think about all the mothers who lose their children because of drunk drivers. It's so wrong.
12:15 AM, August 26, 2008