Night From A Railcar Window 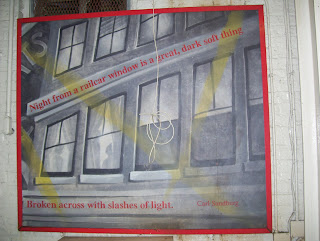 "Night from a railcar window is a great, dark, soft thing
Broken across with slashes of light."

I took this photo at either the Addison or Belmont El stations a few weeks ago and I've been meaning to post it on my photo blog but it'll just have to call this space home. You see, I've been missing trains since I came home to Los Angeles.

I miss their practicality. I was having a moment earlier today where I needed to go somewhere but I did not want to drive, did not want to take a bus and it was too far away to walk. I wished for the umpteenth time that Los Angeles had a better laid-out subway system than we do (painstakingly tears hair out over this).

To be fair, yes, we do actually have a train here, the "Metro", and, despite earthquakes, it's underground in some parts of the city, my part of the city. However, south of Downtown LA it's all above ground. And whether above or below, it's not a viable option for getting around to probably 75% of this sprawling city. As much time as Mayor Villaraigosa spends jocking Chicago's King, Mayor Daley, you'd think he'd have figured out how to really make the subway thing truly happen here -- and throw some Carl Sandburg poetry in the mix to educate the unwashed masses like moi who can't afford $4.50 gas.

But the trains also connect with me nostalgically. A couple of weeks ago I was telling my parents how the constant rumble of trains is etched into my memories of growing up in the Midwest. I mostly associate them with summertime since the windows would be open and I could hear them in the distance. I remember being eight or nine years old and one of those powerful Midwestern thunderstorms knocked all the power out in our neighborhood. Darkness fell and my mother lit an antique oil lamp and put it in my bedroom. I lay awake most of the night, sweating in the merciless heat because my window fan couldn't turn on and I was afraid of the fire from the lamp. Sometimes I wonder if my already existing paranoia about fire was solidified that night because I was so afraid that that oil lamp would somehow topple over and set me ablaze. The only thing that seemed normal that night was the constant rumbling of freight trains in the distance. Their ever-present noise reassured me that despite the helplessness I felt when I flicked the light switch, the world was still alright. 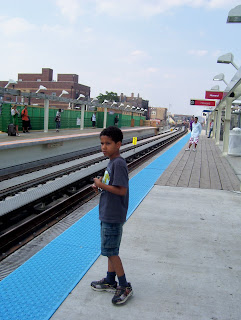 And then, of course, there's the El. Two weeks ago I actually sat on a corner in my old Rogers Park neighborhood and taped footage of the El rumbling past. As I sat, I laughed about how many times I headed to the Morse El Station, running a bit late, my ears listening for the train as I sped down Glenwood Avenue. I always hoped to get to the top of the El platform before the train I could hear in the distance beat me there. If it was summer, I'd usually make it. In the wintertime though, my fear of falling on my behind while literally running down the middle of the street would usually slow me down. So I'd find myself waiting, huddling under heat lamps with a dozen other strangers. I've always joked that wintertime on an El platform is the only time that racially segregated Chicagoans huddle together in one spot.

I used to know what time it was at night by the hum of the Metra commuter train rolling through Evanston on it's way to Kenosha, Wisconsin. It always came at 58 minutes past the hour between 7:58-12:58. And then there's the South Shore train which connects South Bend, Indiana with Chicago. I've lost track of how many times I've ridden that train through Northwest Indiana. The sound it makes as it rattles along the tracks, so fast you think you're going to derail, but thankfully you don't, that sound is permanently embedded in my memory.

Now, here in Los Angeles, I live too far away from the industrial parts of town to hear freight trains. The commuter train is also too far away, and, like I said, the subway is underground in my section of the city. And when I ride the subway here? Well, I don't frequently feel a longing to jump on and ride up to Universal City just to watch my fellow riders, to write down what they're doing, saying, what I think they're thinking. But I can't tell you how many times I rode all the way from Howard to Englewood and back again, just to do precisely that.

How does one city manage to get it right as far as creating that Sandburg ambiance around riding a train, while the other so clearly misses the mark?
Email Post
Labels: about me antonio villaraigosa Chicago Indiana Los Angeles memories the El

Toni Campbell said…
While I complain bitterly about ATL's Marta trains - never on schedule, don't cover enough of the metro area, not enough trains - as a non-driver, it is infinitely more convenient here than in LA. And living across the street from the train station, I can hear them running and sometimes gauge how much time I have to leave the house before the next one comes!
4:53 AM, August 07, 2008

Unknown said…
You should write about our beloved midwest Liz~Really, I have tears in my eyes...you can really capture the heart of here...its impeccable.
6:16 AM, August 07, 2008

Mamita Umita said…
Interesting you should mention the El. Mayor Daley is in Beijing to tour the improvements they made, as Chicago is bidding for the 2016 games. He said that their railway system is far superior to ours, and much quieter. So maybe next time you are in town, the El will look quite different.
8:48 AM, August 07, 2008

Anonymous said…
I miss the Boston T sometimes. Actually I miss it all the time. Its even more pathetic that the city of Durango now has a big red "T" on all of its busses. Friggin posers.
9:30 AM, August 07, 2008

Anonymous said…
I've always loved trains. As a child, I lived in houses right next to a railway line for 21 years. I travelled to every stop on the London Underground just for the sheer novelty of it. But funnily enough, in all the 8 years I've been in Northern Ireland, I've never taken a train because the train network is so basic it never takes me where I want to go - and the nearest station is 20 minutes' walk away.
12:15 PM, August 07, 2008

Liz Dwyer said…
Toni,
Yes, ATL is a step up from LA -- at least not having car is more of an option in ATL than it is here, but the sprawl there is trying to equal the sprawl here so I can only imagine how tough it is there as well.

Houseonahill,
You know, I've been here ten years and I've never been able to set anything I've written here in Los Angeles. I love this city but it doesn't speak to me in a fiction sense. Everything I've ever written fiction-wise is set in the Midwest. I've never been able to set a story anyplace else. There's something about that part of the world that will always capture my imagination, my sense of place and time.

Mamita,
I never rode the train in Beijing but in Hong Kong, it's DEFINITELY superior. They had the concept of public transportation down! Quieter? What would life be like without the screeching of the train wheels around some of those track curves? There does need to be some way to connect the Metra with the El downtown, that's for sure.

Pisceshanna,
Never rode the "T" the few times I've been to Boston. And posers indeed. Why in the world does Durango have a "T" on buses now? What's it supposed to stand for?

Nick,
Oh that must have been so loud to live right next door to some train tracks. I stayed with a friend for a couple of months who lived right next to the El tracks and her place would shake every time a train rattled by -- which at rush hour was like every 3 or 4 minutes. Like you, I rode every single El line, just to experience it. I can remember being a kid riding in the car up the Dan Ryan Expressway and plotting how one day I was going to figure out how to ride the El that ran down the middle. It was just as exciting as I'd thought it'd be when I finally did it!
5:07 PM, August 07, 2008

Jen said…
How does our country manage to have all this wealth and humanpower and not have a good public transportation system in general?