We're almost a week into the 2008 Olympics and I've got some questions and observations about what I've seen so far. So since it's time for another Thursday Thirteen, here's 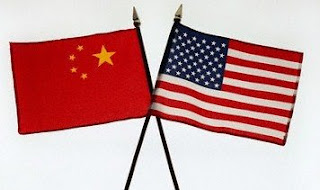 1) Please, enough USA vs China: NBC's coverage of the Olympics is sooo USA vs China. It's like I'm watching some sort of geopolitical "size" contest playing out. And the same folks that will be cussin' over the fact that China's now won more medals than America will be out shopping at their local spawn of satan Wal-Mart tonight, lapping up those "always low prices"!

3) Down with the " model minority" code words! I'm tired of hearing the announcers say stuff about the Chinese athletes supposed "precision" and "quest for perfection" -- like all the other athletes aren't trying to be perfect and precise too. Way to bump up that model minority stereotype, NBC!

4) I don't want to watch gymnastics at midnight! Next time, NBC (or whatever network airs the games) needs to start their evening coverage a tad bit earlier. Even starting at 7:00 pm instead of 8:00 would make a huge difference in how late you've got to stay up to see things. And don't tell me to watch online because it's NOT the same! 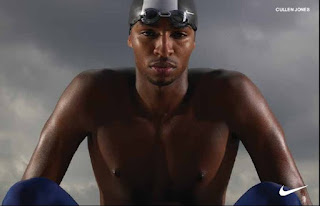 5) Black folks can swim! Even though currently less than 1% of competitive swimmers are black or Latino, hopefully that will start to change. And hopefully, Cullen Jones, only the 2nd gold medal winning African-American swimmer ever, will inspire even more folks (like me) to learn how to swim. Cullen says, "I want more minority kids to go to a swimming pool and try to swim because of me. I know I'm nowhere near Tiger Woods. But I want to make a difference. I want kids to say, 'Look a black swimmer. And he's got a gold medal!' And I want them to get in the water because of it."

Go Cullen! Nothing better than inspiring and smart eye candy!

6) Communist vs Capitalist: Ah, the olden days of the Soviet Bloc against any country from NATO... my, how times change. Where are the Romanian gymnastics folks? Oh wait, they all moved to the USA and now they coach our folks. And yes, I know that China's technically a communist country. But it's all about the profit these days, not Mao's Little Red Book. 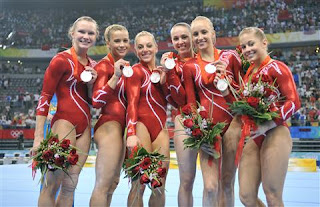 7) The U.S. Women's Gymnastic Team doesn't look anorexic. They actually looked pretty healthy as far as gymnasts go, which is a nice change to see.

8) Is gymnast He Kexin 13? 14? 16? Guess what? We will never know. The government issued her passport so they can say whatever they want about her, even if nine months ago she was 13 in a Chinese state media story. All I know is that a whole lot of folks in Hollywood wish our government could "fix" their ages like that. Your favorite 35-40 year-old actress would love for the government to issue them a new passport that makes them 29.

9) Kobe's Faithfulness: How many of you think Kobe Bryant's been, er, behaving himself? Or do you think he's finding ways to "entertain" himself till he has to play a little bas-ket-ball? (Sorry, if you think he's awesome. I can't help it. I can't stand him.)

10) That Swedish wrestler needs to check himself: Throwing a bronze medal down to the ground during the awards ceremony because you're mad that you didn't get wrestling gold is sooo not classy. If Ara Abrahamian doesn't want his medal, I'll take it and so will all the other folks who didn't even make it to the Olympics. What an idiot. 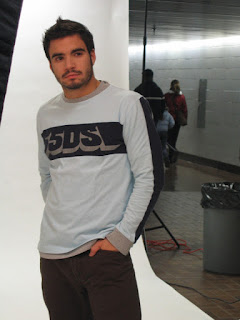 11) Alexandre Despatie is pretty crushable. Gosh, we can never have enough Olympic eye candy and Canada, you've got a winner right there. Alexandre didn't win as many medals as Michael Phelps, but goodness, he definitely gets a "Making the Water Hot!" award.

12) The Spanish basketball photo: Ugh. Time to bust out the, "I'm not a racist! Some of my best friends are Chinese!" speeches. Oh, and don't forget the, "You're racist for thinking that the picture is even remotely racist! Gosh, always seeing racism where there isn't any! We're just showing how we all wish our eyes were shaped like Chinese people's eyes."

13) Torch Lighting: Yes, the Spanish basketball team photo has issues, but my favorite torch lighting is still from the 1992 Barcelona games. Lighting the torch by arrow like that was just amazing. Can you imagine if the archer had missed and set somebody's mama's weave on fire instead?

Two years later in 1994, I was in Tiananmen Square staring at that big picture of Chairman Mao. I found myself wishing that the archer with the flaming arrow was around. But trust me, I was too scared to say that out loud or write it while I was actually in China.


And that's my 13 questions and observations about the Olympics. What do you think so far about this Olympics?


The purpose of the meme is to get to know everyone who participates a little bit better every Thursday. Visiting fellow Thirteeners is encouraged! If you participate, leave the link to your Thirteen in others' comments. It’s easy, and fun! Trackbacks, pings, comment links accepted!

Anonymous said…
I love your TTs. I've seen so much Olympics crapola that your post is truly refreshing. YES - black folks can swim! ;) Esh.... And what a hottie the picture you posted is!

Anonymous said…
What are they showing in Ireland? Well, I can't speak for the Republic, but here in NI there's hours of Olympics coverage first thing in the morning which has pushed out the regular news programmes - as if other news no longer matters. And of course all the emphasis is on how the Brits are doing. I'm sorry, but I think the destruction in Georgia is more important than someone winning a medal, however laudable.
12:51 PM, August 14, 2008

soleil said…
i have been disappointed by the coverage too. especially during the gymnastics. usually we see teams from other countries perform but during the preliminaries it was only china and russia with one performance of a romanian on balance beam with the commentator saying that the romanians just aren't that into it anymore and cutting to nadia comaneci in the stands. ugh.
3:24 PM, August 14, 2008

Melanie said…
Disappointed by the coverage..but still spending all my time watching it when it is on! LOVE the Olympics!
3:33 PM, August 14, 2008

Ian Lidster said…
Very comprehensive, Liz, and I enjoyed your observations and questions immensely. My views on the Olympics can be found on my blog today, and they aren't very complimentary. Of course, I come from Canada and we have zero medals, but the good old CBC still trots our hours and hours of the stuff.
What do they show elsewhere. In 1976, when the Montreal Olympics were on, I was in England. The BBC broadcasts emphasized, of course, how the Brit competitors were doing. When I got back home I found people had a very different interprestation.
Must be more interesting for you in that you've been to China and understand a bit more than a lot of us.
3:59 PM, August 14, 2008

David Sullivan said…
Great observations! I am sick of them calling the USA Mens Basketball "The Redeem Team". Redeem what? I'm glad the rest of the world is catching up in hoops because it'll make winning mean something.
5:29 PM, August 14, 2008

Liz Dwyer said…
Claudia,
Ugh, that's so disgusting that people still do that. I remember going to a pool when I was 15 and other teens got out of the water while making comments that I was making the water dirty. It made me so upset but in the end, what could I do so I just figured, oh well, more space for me to float around!

Nick,
I've been wondering how folks are doing in the UK -- I haven't heard anything except wasn't there a swimming prodigy that didn't do so hot. As far as the war, there's been some pretty good coverage of the Georgian invasion online but in the TV news it's seemed like it's mostly revolved around how dumb Bush or McCain seem or how the US is basically getting punked by Putin.

Jehara,
I was watching when they said that about the Romanians and it was such a weird moment. I'm sure it's got to be difficult for them to figure out what to say for all that time but some of the stuff they come up with I'd be better off not hearing.

Monday Through Sunday,
I know, even though the commentary and the way they set it up grates on my nerves sometimes, I can't help but watch it. I feel so happy for all the athletes and so proud that they're achieving what they are.

Ian,
Canada has zero? Wow, that's unbelievable. I guess y'all clean up during the winter ones though? I lived in Montreal during the 1976 ones. I remember I had the cutest Olympic t-shirt. Anyway, yes, it is really interesting to me having lived there, but it's also amazing to me how rapidly things have changed since I've been there.

David,
I know, that "Redeem Team" mess has got to go. It's like we expect that we're supposed to win every single time. Plus it reminds me of coupons.

Though I can't watch the olympics cuz no tv (do they have it on internet?) I do remember always USA vs x. As if for sure you can't be interested in anything else!

too bad they couldn't invent a way in which you select the sports event you want to see -no matter who's covering it. Hmmmmm.....

Lisa Johnson said…
I've been enjoying your Thursday Thirteen series, even though I may not comment each time. It's so funny when I hear that people think that we can't swim! I used to swim just about everyday in the summer when I was a kid. I really should start again, becuase it's such good exercise.

I haven't been watching much of the Olympics, because the schedule is so messed up. I do want to see James Blake in his upcoming matches.
5:02 AM, August 15, 2008

Liz Dwyer said…
Miriam,
I believe you can watch all the events online somewhere on the MSNBC site. Not sure where exactly though. Your idea is such a good oen. Wish it happened like that! And I'm not sure if our government would do a cover up like that. I don't think we could get away with it these days.

Anali,
It is great exercise. I can't swim but it's because I have such a fear of putting my head under water. I want to give learning another try though because I don't want my sons to be scared.

Anonymous said…
OMG could you have posted any MORE HOT GUYS? Dammnnn. I'd fake a drowning around Cullen Jones anyday.
12:04 PM, August 15, 2008

Liz Dwyer said…
Pisces,
Well... I guess I could post photos of about half those track and field guys. ;)

Karen,
Good point about the camera adding weight. I'd forgotten about that. In real life they're probably the size of my seven year-old.

Jen,
Lucky that you get that CBC signal. It's nice to actually get to see lots of international match-ups. Makes it feel more like a world thing instead of an American thing.
11:23 PM, August 16, 2008