It's Martin Gore's Birthday, Here's the Best Photo Ever of Him 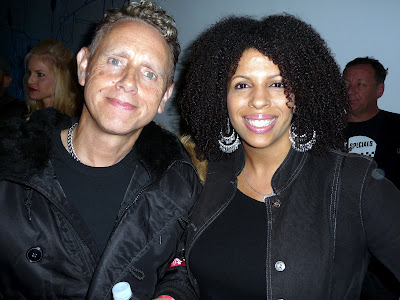 Obviously, I think this photo of Martin Gore and moi taken last December is the best photo of him ever. Whether you agree is another matter. And if you're asking who Martin Gore is, I know you've never been to this blog before.

I'll give you the Wikipedia version of who he is:


Martin Lee Gore is an English songwriter, lyricist, singer, guitarist, keyboardist, remixer and DJ. He is a founding member of Depeche Mode and has written the vast majority of their songs. His work now spans over three decades.

And the Los Angelista version:

Martin Lee Gore is the founder of the Best Band on the Planet, Depeche Mode. Gore sings like an angel--he can actually sing live-- rocks the guitar and synth, has awesome hair, has a creative fashion sense, always has a fresh manicure, is the reason I made up the #MartinGoreIsTheBombdizzle hashtag, and is writer of the soundtrack of most of my adult life. Added bonus: He's sweet to his fans and doesn't freak out over the fact that we really really adore him.

Also, I've somehow managed to never throw underwear at him. But you see how big I'm smiling, right? That's my "I'm going to play it cool and act all nonchalant and like a normal person but HOLY ISHTAR, I'M STANDING NEXT TO MARTIN GORE" look. Sigh, it's been almost nine months and I'm STILL tripping.

The birthday boy is 51 today and I hope he's blowing the candles out and enjoying himself. Want to know why all love him so much? Because he gives so much of himself to his fans:
Email Post
Labels: #MartinGoreIsTheBombdizzle birthdays Depeche Mode I know you think I'm crazy after reading this martin gore Music