Forget What You Learned in That Hair Documentary, Black Women Are Not Terrified of Water 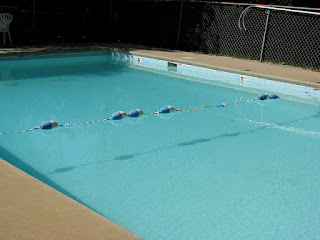 "You know your hair is going to get wet, right?" asked the 50-something white woman eying me as she floated a few feet away from me this afternoon in my local public swimming pool. Yes, the same pool where a couple of summers ago I had a run in with a white woman who couldn't handle the fact that I refused to allow her to pet me.

However, this most recent hair question confused me since I'd already been in the pool for 20 minutes doing laps with a kickboard and my hair was already wet. I'd forgotten a rubber band to put it up in a pony tail so it was not only wet, I had water spiraling down every single tight corkscrew curl on my head. My confusion must've shown on my face because she floated closer to me and hissed, "You're going to get your hair wet here in the pool!"

I figured she must have some sort of mental health issues so I backed away slightly and smiled as I replied, "Don't worry. I know it's getting wet. It's alright if it does."

"But I thought you black girls are afraid of water because it wrecks your hairdos," she said. And then she added "At least, that's what I saw in that documentary."

"Which documentary?" I asked, even though I already knew the answer.

"That one on hair," she replied.

"Oh, well...don't believe everything you see in documentaries," I said as I pushed off the edge of the pool for another lap.

In June a guy in Trader Joe's asked me if I am afraid of water because of my hair. He also told me, "I learned that about black women in a documentary."

I told him that I am not afraid of water. "In fact, I shower ever day," I said. He subsequently stated that the documentary he'd seen had explained how "difficult" and hard to take care of black women's hair is. He asked if it takes me hours and hours on it every day to do mine. He couldn't believe that I only spend a few minutes on it.

I shared that interaction on Twitter and my friend Noble Honore tweeted back "umm, more like he saw a chris rock doc and thought all blk women are afraid of water and wear weaves."

I refused to see "Good Hair" when it came out in 2009 because every trailer seemed to be mocking black women's hair care practices and how much some of us spend on straightening products and weaves. Also, during an appearance on Oprah to promote the film, Oprah showed Rock a childhood picture of herself with natural hair. He had the nerve to say, "You look like a slave." It's been almost THREE years and I'm still hot over that.

Of course, these two interactions aren't proof that all white people in America walked away from Rock's documentary thinking black women must be afraid of water because it'll jack up our hair, or our hair is difficult and tough to manage. But these two probably aren't alone in thinking this way. One thing is for sure, Rock's "OMG those crazy black ladies love weaves" mockery is getting another serious side-eye from me.

Rosita said…
I have not seen the documentry, but I have coworkers who perpertuate the myth. I am white, but my children are all biracial and all boys. I have heard from several of my black female coworkers every summer that it is lucky for me that I have boys. Their reasoning is since I keep their hair short (dad's preference) they have an easier time at the pool than a girl would. (I also get comments about hair everytime I am pregnant, but that is another issue.) I am never sure exactly how to respond, it usually depends on who is saying it how much I will challenge what they are saying.
6:26 AM, July 23, 2012

Carolyn (Diary of a Sewing Fanatic) said…
I refused to watch that mess because of the commercials too. It seemed to me like Chris Rock just woke up one day and found himself surrounded by black women and started bugging. I like Chris Rock. I like his humor but in this instance I felt like he must have been the most self-absorbed person on the planet that he didn't notice these things growing up.

And not all black women have weaves, are unable to grow their own hair or even put that much emphasis on their hair. That dayum documentary has put forth even more stereotypes and don't we as black women have enough stereotypes to deal with as it is...
6:42 AM, July 23, 2012

Stesha said…
I watched half of the documentary and turned it off. We face too much in our everyday lives to now have to defend a documentary that's not true. I, for one, would not fly halfway across country to get a weave. Nor, do I know of any such woman who would. The women filmed are the exception not the rule. And I can't believe he said that to Oprah! That's the comment of a rude misinformed person.

Lola Gets said…
Oprah should have slapped Chris for that slave comment, that wasnt right at all. While Im happy white people are watching documentaries about Blacks, Id be happier if they were exposed to more diversity within the genre. I also would have loved it if Good Hair had more natural-haired sisters in the movie but thats a whole 'nother discussion there, lol.

Id just say Im not like most of the women in that documentary...I have natural hair and can do just about anything I choose to!
2:50 PM, July 23, 2012

Val said…
The thing that bothered me about that incident on Oprah wasn't that Chris Rock said what he said, but that Oprah just sat there and laughed.

Liz Dwyer said…
Rosita,
As we were leaving the pool we passed a dad who was standing in the parking lot next to his car trying to comb the tangles out of his daughter's super long hair. She was complaining SO loudly in Spanish...it made everybody walking by laugh a little because dad did NOT know what he was doing. I mean, I don't know anybody who won't say a boy's short hair is easier than a girl's long hair, no matter what racial or ethnic background you come from.

That said, I know what you mean and I got comments about hair when I was pregnant, too. I was told by a few women that I should hope the "good" hair gene got to my future child since it so obviously skipped me. Of course that's just a manifestation of the self hate black Americans have been indoctrinated in. There's also the reality that if I just spent half my Saturday getting my hair done at the beauty shop, I'm NOT going swimming no matter what background I come from!

Carolyn,
That's what I thought about Rock, too. Like, c'mon son, are you serious? I have heard that there is not much on natural hair in the doc and he focuses WAY too much on weaves. Come to think of it, I have had an increase of random folks asking me how I take care of my weave.

Stesha,
OKAY? If I'm flying anywhere it's not for something hair related! Hugs back to you, too.

Lola,
If she slapped him then she'd be an angry black woman and we can't have that, can we? The thing is, even when I relaxed my hair, I still worked out and did all kinds of stuff. I think it's a matter of whether you know how to take care of your own hair or not that makes the difference in whether you're going to be active. But I definitely don't run from rain anymore. ;)

Val,
I would've LOVED if she'd not laughed at all and just sat there and given him THE LOOK.

Matt said…
Related yet unrelated... you should have seen the looks and comments I got when I (a white man) braided my wife's (a black woman) hair at the pool this summer.

Rosita said…
I totally agree with you about the fact that short hair is easier than long hair no matter what the race and/or gender. I just notice it (and honestly get tired of it) because hair seems to be a constant subject of conversation for them (and not in a good way).

The thing is, and I have told them, if I ever have a girl, I will keep her hair natural. The internet can be a great place and I have already found penty of information about natural hair care in addition to having friends who have natural hair.