I Promise I Didn't Throw Any Underwear At Martin Gore 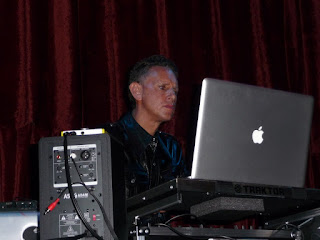 It's been 24 days since I met Mr. Martin L. Gore, founder of the Best Band on the Planet, Depeche Mode--which I've loved since I was 11.

Since then I've been trying to find some way to write about the experience without sounding like a total fan girl...which means that every day I say, "Today's the day I'm going to write about meeting Martin Gore without sounding like a total Justin Bieber-style tween"--and every day I'm unable to express myself like I'm a sane, mature adult. This is, you know, absolutely terrible because, ahem, I'm supposed to be professional...writing about serious things and, you know, using grammar and punctuation correctly. People are going to come here to this blog and be like, um, what in the hell is going on with this woman?

But now that the sun is about to set on the month of May, I figure I have to just get it out there. Laugh at me if you must, but...

Don't be a hater over that last sentence. Sometimes the world absolutely needs more exclamation points, especially when it's Depeche Mode related. Besides, when Martin exhaled, I did indeed inhale. That's called breathing, so I'm not exaggerating.

Yeah, if you think my fangirling is ridiculous on May 31st, just imagine how off the hook this would've been if I'd written it on May 7th--which will now will annually be celebrated as the official Day I Met Martin Gore.

But how did this serendipitous happening come to be? Martin's a charitable sort of guy so he decided to do a DJ benefit for a music nonprofit called the Rockshop Academy. They're located where he lives in Santa Barbara, CA--which is just up the coast from Los Angeles.

I wanted to go to the benefit, but I could NOT see the forest for the trees because I was stressed out. I have a very busy work schedule, two kids that are on two different baseball teams, take piano lessons and swimming lessons, a husband who usually works weekends, no easy access to a reliable babysitter, a dog that regularly destroys my shoes...and so I didn't buy a ticket to the show.

By the time I decided that going would work out somehow, the show was sold out. What's stuck in my mind just as much as meeting Martin is the kindness, generosity and thoughtfulness of my friends and fellow Depeche Mode fans. One friend offered to watch my boys for me. Another super nice fan I'd talked to online but never met in person messaged me on Twitter to ask if I was going, and when I said no, she said she'd try to get me a ticket--which she actually did AND it was a ticket that included the VIP meet-and-greet with Martin. Still another fan asked me if I wanted to carpool up to Santa Barbara with him and another DM fan. My husband thought I was crazy. "Are you really going to get in a car with some people you only know from seeing them at Depeche Mode shows?" Yep, sure did, and it turned out just fine.

Once there, we met Martin in groups of people, and that's probably the only reason I didn't

a) faint
b) throw underwear at him, or
c) faint.

I don't usually get starstruck, but seriously, this was Martin Gore! I'm sure I sounded like an idiot when I told him, "You changed your hair! I like it!"

Instead of having him sign a piece of Depeche Mode memorabilia, I actually had him sign the inside of my personal journal...because--and this is going to sound cheesy to you non-fans but I don't care--Mr. Gore inspires me and I wanted to write where he's written. Here he is signing it: 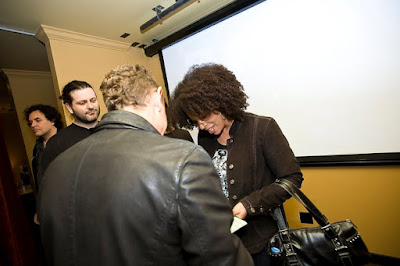 I realized this week that my name and phone number are also on the inside cover. I hope he didn't think I was trying to slip him the digits! (Psst, Martin: I wasn't. OK?)

We didn't get to have individual shots with him, but the official event photographer took group shots with us--that's Martin in the middle. 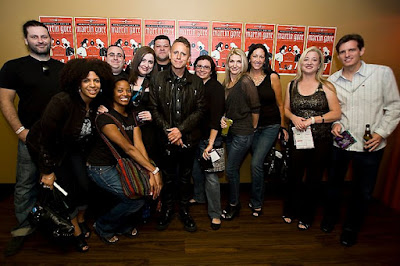 After the meet and greet, I had a ball dancing and hanging with my fellow fans while Mr. Gore DJ'd. 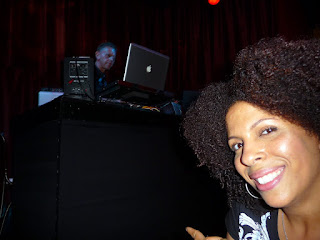 Then I headed back to Los Angeles where I sat down and wrote in the journal I'd just had signed. Aww, heck, OK, here's what I wrote:

"You ever see a little kid on their first trip to Disneyland? How they get that super awestruck look in their eyes that says "OMG, dreams really DO come true?" Well, tonight I had a dream come true that had NOTHING to do with Mickey Mouse. Tonight, I met the man with the wings, Mr. Martin L Gore. Holy crap. I met Martin Gore! THE MLG! The same Martin Gore I made up a hashtag about. #MartinGoreIsTheBombdizzle. And wow, I probably came off like a complete idiot when I met him but that's OK because I'm smiling wholeheartedly for the first time in awhile. When times are tough, I need to remember that people I don't even know all that well, or don't know at all, are kind. There IS goodness and love in this world, even if it doesn't seem like it sometimes. And when you feel uninspired, just write "I met Martin Gore! I met Martin Gore!" over and over again.

I'm not sure what good karma I racked up to make it happen, but wow, I have memories for life!
Email Post
Labels: #MartinGoreIsTheBombdizzle Depeche Mode Disneyland kids martin gore Mickey Mouse Santa Barbara Stressed Out swimming Work

Michele said…
This post just makes me smile & feel warm & fuzzy for you, Liz. We've known each other for a few years but everyone of those "in-persons" makes me smile & feel lucky to know such a smart, warm & worthy woman. It's with admiration, awe & gratefulness, I watch your walk through great moments in a sometimes difficult life ;-)
2:44 AM, June 01, 2011

Reese said…
How very exciting! I felt the same way meeting Glenn Tilbrook & Chris Difford of Squeeze and Dave Wakeling of the English Beat - giddy, giggly and 12 years old. And, every single one of those exclamation points is valid!

Jameil said…
LOLOL You could've written this in super hype fan girl voice May 7th and we would've not only understood but been just as excited for you!
9:24 AM, June 01, 2011

Liz Dwyer said…
Michele,
Gosh, what a nice thing to say. You just made tear up here at work. HUGS and love. So glad you were there to share in my I just met MLG and I'm hyperventilating!

Reese,
Glad you approve of the exclamation points! It's a nice feeling when you meet someone you've admired & has been a big part of your life, isn't it?

Houseonahill,
Thanks! Glad I finally put it on here because rereading it makes me feel REALLY happy.

Jameil
Ha! No...I don't think you wanted to read that. I was seriously trippin. Like, I was on some serious I just smoked Depeche Mode crack rock stuff and chased it with a can of Red Bull.
9:44 AM, June 01, 2011

Leili said…
This is inspiring - you so deserve the happiness you received experiencing this dream come true! For reals!
7:50 PM, June 01, 2011

Daniel said…
Los Angelista,
All I got to say is …

Liz Dwyer said…
Lej,
How nice that you got to meet him! So special! Yes, that's the same feeling!

Leili,
Gosh, thanks for saying so. It really all came together in such a remarkable way--like it was meant to be. :)

Leni Estrella said…
I just read your experience with Martin and i`m actually smiling with you. I only saw him once in the front of his hotel, but never met him personally. I was smiling the whole day and my hands were shaking only by knowing he was in my near.

Thank you for your post, it was such a fun to read.