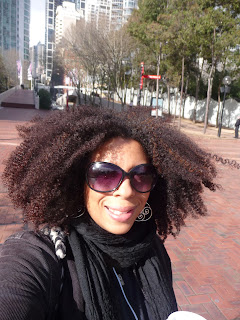 I made to Australia in one piece! The downside of traveling alone is you have to take self portraits all time time--unless you trust someone to do it for you. Which I didn't today since I've been warned about A. being abducted and sold into white slavery (seriously) B. Not ending up like the daughter in Taken and C. Not letting a dingo eat my baby. Nevermind that I don't have a baby.

I think I know how those people who swear they were abducted by aliens feel. Traveling to Sydney from Los Angeles means that you cross the International Date Line--I left Los Angeles on the evening of July 3rd and arrived in Sydney on the morning of July 5th. So I totally missed out on the Fourth of July! I have missing time, just like the alien abductees!

In all seriousness, Sydney's pretty awesome. I spent a good amount of time walking around--after sitting on a plane for 15 hours and spending an hour going through customs, I REALLY needed to walk. The section of the city I'm staying in reminds me a bit of San Francisco--the hills aren't a steep, but there's a similar atmosphere.

While wandering through Chinatown I came across two teens doing what teens do every day in America: make up dance routines to the latest R&B tracks!

I stand out like a super sore thumb--you should see the stares my hair is getting--but I take comfort in knowing that the influence of African Americans is felt all the way across the Pacific.

Actually, after passing a 7-Eleven, I started thinking about how one of the downsides to globalization is that when you go someplace new it's much more difficult to find the unique, local stores. On the one hand, it's comforting and familiar--I was SO happy to stumble across a Starbucks and get a venti Earl Grey. No chai because the prices here are NO JOKE and I wasn't about to pay almost $6 Australian Dollars for a medium one. But, if I want to shop at Zara, I could do that in LA. If I wanted to go to the MAC counter...you get the point. But you know what I don't see in LA? Dudes playing chess in Hyde Park:


Can you guess which one of them won?
Email Post

nick said…
Sydney is amazing. I've been there three times. I recommend taking the ferry to Manly and also doing the coastal walk from Coogee to Bondi.
1:11 AM, July 06, 2012

Liz Dwyer said…
Sundry,
I am REALLY feeling the jetlag this evening. Ugh.

Tafari,
LOL, no. I haven't seen any. Still waiting!

nick said…
It was expensive enough last January. We just had to hunt out the cheapest restaurants and supermarkets and tourist attractions. And be prepared to fork out for something we really wanted to do despite the price.

There are loads of aborigines in Sydney but most of them look just like everyone else. And yes, mostly they speak English because they're surrounded by English-speakers.
3:04 PM, July 06, 2012

Liz Dwyer said…
Nick
So true...it's not like aboriginal people walk around with a sign on their forehead proclaiming their identity--but I suppose it's one of those things like if you come to the U.S. you KNOW (usually) when you've seen African Americans. I can't get over the $$ here.
6:04 PM, July 06, 2012