If Mr. Martin L. Gore--singer, songwriter, musician, and founding member of Depeche Mode--pinched me, I'd probably smile even harder. Indeed, I've been beaming all week because last Saturday I headed up the coast to Santa Barbara because not only is Gore quite the musical genius, he also gives back to his local community by DJing events that raise money for music education programs for youth. Making the soundtrack of my life for the past 30 years AND a heart of gold! Who is this man, and can we clone him for posterity?

I bought tickets for the event, not knowing who was going to watch my kids, whether I'd be rolling solo or if my husband could get the night off--all I knew is I was going. After meeting Martin in May--and somehow managing not to throw any underwear at him--I figured it would be STUPID to pass up another opportunity to admire his hair up close and personal. I've even had bronchitis since mid November and pretty much the only reason I went to the doctor last week is that I didn't want to be coughing all over the place and feeling too sick to enjoy myself at the event.

You see that smile in my picture with him? That's me MAJORLY enjoying myself. Actually I'm surprised my smile didn't jump off my face and attack him.

Just think, if only my phone had been turned on so he could hear that verse from Depeche Mode's 1990 B-side "Happiest Girl" ringing while I stood next to him. I could've been all, "Gee, didn't you write this song? I listen to it at least a dozen times a day. I even have that verse as my ringtone..." 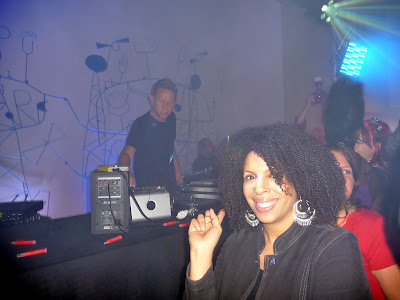 There were a few technical difficulties at the start of his set. I love that as many times as he's been on stage, he actually looks a bit worried. Prince always says that he's gonna put on an amazing show whether he's performing for 10 people or 10,000. It's pretty clear that Martin feels the same way. 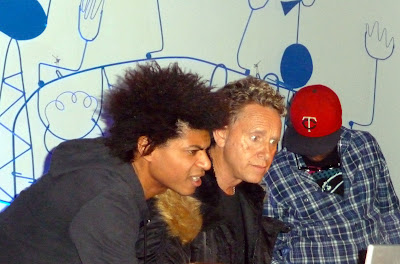 Fortunately, the problem was minor--something wasn't plugged in properly--so after only a few minutes Martin finally managed to get his DJ groove on for us. I was completely thrilled that he played his latest project, a techno record named "Spock", which is the product of a collaboration with former Depeche Mode member Vince Clarke--who went on to create Yaz and Erasure after leaving Depeche Mode.


Of course, along with Mr. Gore being the bombdizzle, the thing that always makes any Depeche Mode event an amazing experience is the time spent with other fans. In particular, I was so happy to meet Lenina, who is one of the Depeche Mode Message Board moderators, for the first time. She came all the way from Mexico and I couldn't give her enough hugs. 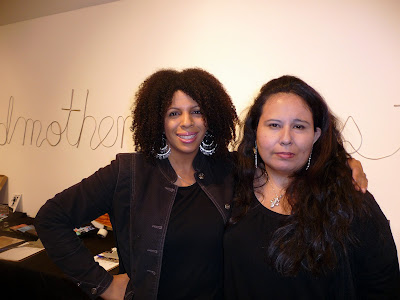 She's so thoughtful that she remembered that my birthday is coming up at the end of the month, and so she brought me a lovely pair of silver moon and star earrings.

Fans like Miranda--who has one of my fave Depeche Mode tattoos--were also there. Really, if I didn't fear pain I might go for something like this: 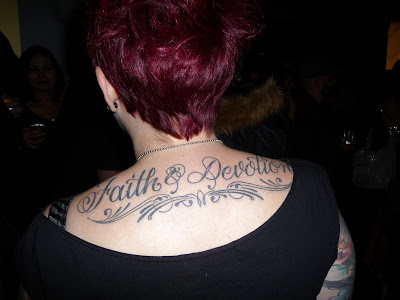 There was also a cake, complete with a Martin Gore cookie that I hear someone jacked early on in the evening. I wonder if the person who grabbed that cookie is going to freeze it like a wedding cake and just take one bite per year. 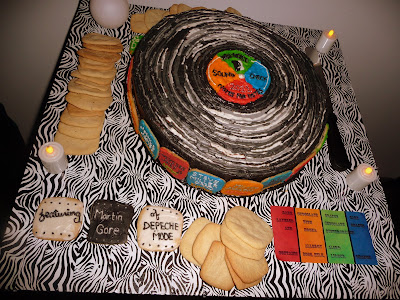 There was plenty of dancing and general good energy. But, before I knew it, it was midnight, Mart's set was over, and it was time to head home to Los Angeles. He looked so happy at the end of it. I think everybody in there was really touched by how happy he was. 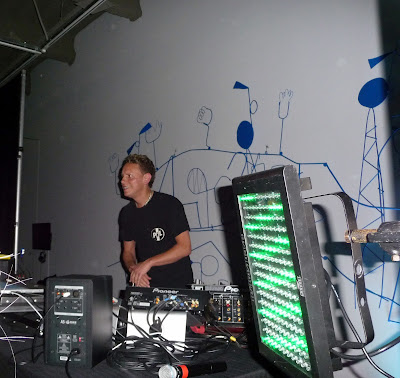 What amazes me is that I've loved Depeche Mode forever and never met any members of the band.  Now, in 2011 I've met Martin twice. Earlier this week a friend commented that in the picture of the two of us, we look like old friends. My reply? I have kind of known him for nearly 30 years. He's been there for all the ups and downs, even if he doesn't know it. For that, thank you, Mr. Gore.
Email Post
Labels: #MartinGoreIsTheBombdizzle Depeche Mode happiness martin gore Music Santa Barbara tattoos

Liz Dwyer said…
Sheridan,
Oh you are so thoughtful to point it out to me! I'd already seen it but I sure don't mind looking at it again. Love that picture.
9:23 PM, December 12, 2011