Where Are the Modern-Day George Jeffersons on TV? 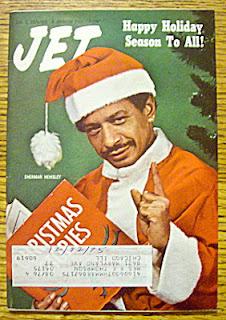 I didn't watch much TV growing up. But everyone who was alive when "The Jeffersons" were on in the late 1970s-mid 1980s can sing the show's famous theme song. I certainly enjoyed imagining myself "movin' on up to a deluxe apartment in the sky."

And every week when my mom's copy of Jet magazine came in the mail I always read the page that listed the very few shows and times when black folks would be on TV. Even though I rarely watched the show, there was still something rather comforting about seeing Sherman Hemsley's name--and the rest of the black cast--listed on that page.

Sure, I was just a kid but I remember thinking that Hemsley really was George Jefferson. Now I know I believed this because Hemsley was truly a top-notch character actor. Indeed, Jermaine Spradley aptly blogged today over at the Huffington Post, "George Jefferson, entrepreneur, pillar of the Upper East Side community and legendary example of black American financial ascendency has died."

Spradley went on to note, "George spent much of the 1970's working through the anger and frustration many black men felt, having had to spend most of their lives fighting against the direct, overt racism prevalent in this country during the first half of the century. That anger often expressed itself through hilariously bigoted tirades and hair brained get-richer-quick schemes."

Sure, The Jeffersons was racially groundbreaking, but Spradley's obituary for the character made me wonder how Hemsley felt about having to portray an often stereotypical, scheming, sometimes bigoted black man who was written by white male writers who were undeniably a product of their time.

It also made me wonder, who is Hemsley's modern-day equivalent? I still don't watch much TV so who are the actors with their own shows--with predominantly black casts--telling the stories of black men dealing with both direct and indirect racism in modern America? And, where are the modern shows depicting committed, married black men and women--like George and Weezie Jefferson--instead of an endless loop of "Love & Hip Hop" drama? For real, is "Reed Between the Lines" with Malcolm Jamal Warner all we get?

I also don't know what Hemsley thought about the state of black folks on scripted television--or rather, our nearly complete absence from it--in 2012 but it's weird to not be able to name a sitcom like The Jeffersons that's on today. When it comes to telling diverse stories, I know plenty of us wish that Hollywood would've made more progress over the past 30 years than it has, and I bet Hemsley felt the same. Still, RIP, George Jefferson. Thank you for giving us your best despite it all.