What Day Is It? Either Way, It's Randomness Time!

Is it already 12:07 am on Friday night? Er, I mean, Saturday morning?
Since it is, I officially enroll myself in the 12-step program called Blog Slackers Anonymous.
The first step:
I admitted I was powerless over falling asleep on my couch instead of writing on my blog... pfft, Let's just jump to the 'making amends' step and I'll get to writing.
1) Hey BP! Meet My Foot!: I know BP's CEO Tony Hayward did NOT say, "The Gulf of Mexico is a very big ocean. The amount of volume of oil and dispersant we are putting into it is tiny in relation to the total water volume."

==> Oh, snap. YES HE DID! Where are all the ol'skool grandmas saying, "Go get me a switch from up out the backyard," when we need them?
I think I'm suddenly in favor of waterboarding certain very special oil excutives with oil and dispersant contaminated water. And I think that's what President Obama was feeling today, too. -- Actually, I think Obama wanted to go grab the closest extension cord and go to town. Yes, I said extension cord. They're multipurpose for real. (There is no "ask me how" button on my shirt, mmkay?)
2) SOB! "Angel" Ain't An Angel: As a watcher of every single episode of Buffy the Vampire Slayer AND it's spinoff Angel, I've been a BIG David Boreanaz fan for a long time. Seriously, my world used to STOP when Buffy or Angel came on TV. (Yes, those were the days before I had kids.)

The one time I saw Boreanaz in real life was at The Grove here in LA just after his first kid was born. He was pushing the baby carriage for his wife. But, he just HAD to go get it on with that Rachel Uchitel character WHILE his wife was preggo with their second baby. Eww, who does that? And WHY, pray tell, are jump-offs holding press conferences live on TMZ to discuss the dirt they've done?
I think there's a Whodini song for that...
And before you get your panties in a bunch, they BOTH need to be singing it. Actually, how about all of Hollywood just organize a group sing-a-long at the Staples Center after the Lakers win the NBA Championship again. Kobe can lead it.
3) Speaking of Vampires...: If Hollywood made vampires look like Glenn Beck, nobody would be interested in them.
Instead, we get hotties like Paul Wesley playing vamps on TV. 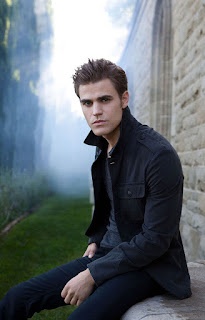 Clearly, this is the 'How Ya Like Me Now?' pose.
Seriously, the Vampire Diaries guy is SO much better looking than that Twilight dude.
4) Something In The Milk Ain't Clean: Just like when applying hair gel, baby oil and lipgloss, with Photoshop, there's clearly a certain point where you just need to stop while you're still ahead. 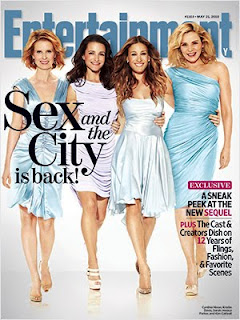 Obviously, the person who did this travesty to the Sex and the City ladies didn't get the memo. I'm SO not excited to see this movie.
5) Macy's On Friday Night: I can testify first hand that not one piece of clothing in that store looks good on me. Believe me, I tried to make it work. Nothing was working. I'd like Tim Gunn to drag me around in there. Make something work for me, Tim. Please.
Last But ABSOLUTELY Not Least
6) Junior High Movie Time in Oxnard: The only time I go to Oxnard, CA is when I'm driving up the 101 on the way to Santa Barbara. I used to know almost nothing about the place. But as of yesterday, I know that some middle school kids allegedly got their freak on IN CLASS while the room was dark and a film re-enactment of a book they'd read was being shown.
Just as gross is that some parents claim to have seen video of it. That's just nasty!
****
Now it's time for bed. OK, it was time for bed like 3 hours ago. Hope you're out there doing something more fun then blogging tonight!
Email Post
Labels: David Boreanaz lakers Macys Oxnard President Obama SATC Vampires

nick said…
Hey, come on, all you whingers. Nothing wrong with a bit of oil slopping about the place. It's not a problem, it's an opportunity - for all those wildlife rescue shelters. Gotta see the bright side!

And yes, those Sex and the City gals are still 20 something and fresh as a daisy, judging by the advert. I eagerly await Sex and the City Six when they're all in their sixties and seventies....
5:28 AM, May 15, 2010

Elita said…
Girl when it came out that Tiki Barber had left his pregnant-with-twins wife at home to get with his blonde jumpoff, I basically lost all faith in humanity. I really thought Tiki was one of the good guys. And as someone whose own father abandoned his mom with twin boys to raise, you'd think the irony alone would've been enough for him to keep it in his pants. I heard his wife is on bedrest because of the stress.

Liz Dwyer said…
Nick,
Can you believe folks actually think the environmentalists staged this for their benefit.

I'm scared of the prospect of SATC in their 60s! Good grief!

Elita,
I totally forgot about Tiki. I think I was trying to block that whole story from my mind because it seriously hurt my heart. I had no idea his dad did his mom like that too. What is WRONG with people? I hope his wife gets EVERYTHING!

OK, in the past two months I've been so loving that site. He had me on the floor DYING with laughter over his post the other day about Kate Beckinsale's dress at Cannes! DYING! - Does he use that phrase over there?
9:06 AM, May 15, 2010

nick said…
People actually believe that? Such warped minds. Someone should spill a load of oil over THEM.
1:29 PM, May 15, 2010

digal704 said…
I also want to know regarding the mistress press conferences, is Gloria Allred the only lawyer in town? What exactly is her specialty? Is she doing this pro bono? Last but not least, is she serious?
2:00 PM, May 15, 2010

Elita said…
Liz, Yes, Michael K from DListed is HILARIOUS. I had to stop reading him at work because I lose my shit when I read his site. He uses the phrase "something in the milk ain't clean" all the time.
7:01 PM, May 15, 2010

Liz Dwyer said…
Digal704,
Lawyer to the Celeb Mistress must be her m.o. these days. I guess she's serious as long as she thinks there's a payday in store for her.