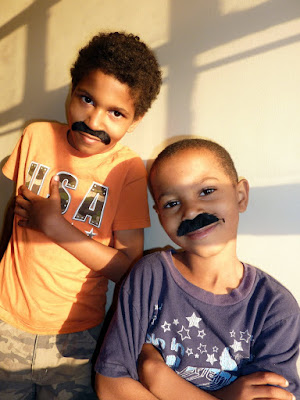 It's 11:00 PM. Do you know where your children are?
Let's hope they're not out in public looking like this, mmkay?
My boys swear they're never going to be caught with their butt hanging out. And, if your kids are like mine, they sure as heck aren't in the bed -it's Saturday night. Time to party!
Instead of sleeping, my boys are busy speculating on how awesome their lives are going to be once they grow mustaches.
This afternoon we went to a local street fair and Mr. T and Mr. O each spent $1 and bought a couple bits of lip fur. The next thing I knew, hipsters were coming up asking to take the two boy's pictures. "They just look SO cool!" they gushed.
Pre-mustache, no one asked for photos. Post-mustache, I felt like I was strolling with Justin Bieber.
We passed by the vendor again and he said that since selling mustaches to my boys, his sales had gone through the roof. Everybody was coming by wanting the mustaches they'd seen on the two cool little boys.
Imagine that! My two sons are now hipster trendsetters!
Alas, the dynamic mustache duo eventually removed their fur because, "These things are itchy!" and, well, it's hard to eat an ice cream cone while wearing a fake mustache.
How many years left till the real thing grows above their lips? I hope it's awhile.
Email Post
Labels: hipsters kids Los Angeles photographs

nick said…
Oh yes, two cool dudes all right. But if they grow the real thing, won't it get in the way of kissing as well as eating ice cream? I've never had a moustache but I had a very luxuriant beard in my John Lennon/ hippie period. It was horribly itchy and didn't last too long.
12:27 AM, May 23, 2010

Liz Dwyer said…
Jameil,
I should've charged $$ to everybody that wanted a picture.

Nick,
They complained about the fake ones itching and being in the way so I don't think they too keen on having the real deal when they get older!