I came home a little after midnight and discovered this single-car crash in front of my apartment building. I missed the actual crash by about five minutes but a few of my neighbors saw the whole thing happen. The car crashed into a telephone pole, bounced off, and all the occupants jumped out. Or rather, all but one of them did. 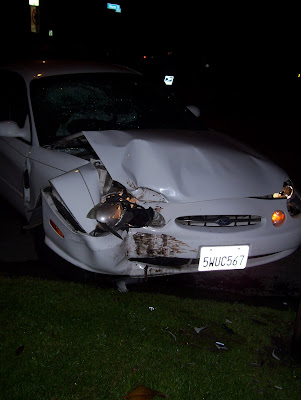 According to my neighbor, the person in the front passenger seat hit the windshield and was seriously injured. He has such great friends though. They pulled him out of the front seat and dragged him away. Look at the glass on that windshield. Look at that exploded airbag. That had to have hurt a whole lot. 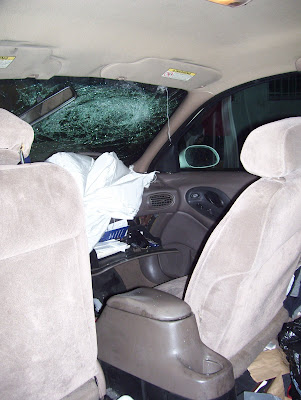 I'm sure you're asking yourself, "Why does a single car hit a telephone pole? Why drag away someone who's injured?" Well, let's take a look inside the car. What do you see? 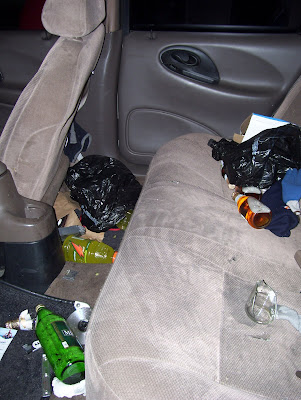 Clearly, everyone in the car should have stuck to drinking the Gatorade. But I think you'll agree that they were probably drinking the liquor instead.

They had lots of alcohol in the car. A bunch of it fell onto the street as the occupants pulled out the occupant of the passenger seat. By the time I got to taking pictures, a river of liquor was flowing in the gutter, mixing with the fluids leaking from the underbelly of the car. 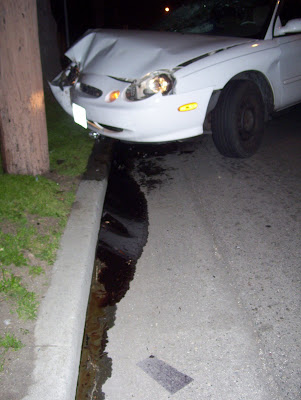 It makes me unbelievably angry that a great many people in this world are so incredibly selfish that they'll just keep drinking and driving. What will it take to get people to cut this mess out?

Thank goodness no innocent drivers or pedestrians were hurt. Thank goodness the light pole didn't fall over onto my building. And thank goodness that the city actually came out to check and make sure the pole is still stable.

Jameil said…
did you get INSIDE the car for those other pics??? girl i can't tell you how many DUIs we get every day. its ridiculous. people are selfish. very very selfish. they'll get in even more trouble for leaving the scene of an accident.
8:33 AM, March 02, 2008

Liz Dwyer said…
Sundry,
I felt like citizen journalist out there snapping these photos. I watched the police after they came and they didn't even take pictures of the car till after it was hooked up to a tow truck.

Jameil,
No, they didn't shut the door after they made their escape so I was able to just walk right up on it and take photos. I think they deserve whatever trouble comes their way. I wish I could be the judge hearing their case.

Anonymous said…
I don't know what to say any more about drink-driving. Appalling accidents like that happen with monotonous regularity here in Northern Ireland and it doesn't matter how many people try to drum some sense into reckless young heads, nothing changes. Countless promising young lives lost, hospitals clogged with booze-related injuries, distraught families - there seems to be no end to it.
12:21 PM, March 02, 2008

Thanks for sharing your close encounter with a sad and painful issue. While we can't speculate as to the official cause of this crash, we hope your many readers will take into account their personal condition - and the safety of others, whenever they get behind the wheel.

Respectfully Yours in Safety and Service,

Liz Dwyer said…
Anali,
If I could fly there and report on it, I would! That would be so neat. ;)

LAFD M&PR
Brian, thanks for stopping by and sharing your thoughts. I know you all see more of these horrible scenes than I do and surely this accident scene was not as graphic as it could have been. I join you in hoping my readers are never behind the wheel when they shouldn't be.

Ian Lidster said…
Bet you $100 the car was stolen in the first place. That goes on all the time around here. The penalties for drunken driving can never be stiff enough as far as I'm concerned.
3:57 PM, March 02, 2008

Anonymous said…
This is a very compelling post. I'll admit that I wasn't expecting the COPS vibe when I decided swing by. It's awesome that you were able to get the shots you did.

If the car wasn't stolen then the kids/occupants have already been caught. I'm just glad it was a pole the idiots hit and not something more valuable, like a human.
5:28 PM, March 02, 2008

heartinsanfrancisco said…
This issue infuriates me too. I see drunk drivers every day, endangering me and everyone else in the vicinity.

If they want to do away with themselves, that is their right. But they do not have the right to maim and kill the rest of us.

My delightful next-door neighbor often drives her car into the garage below the building and then leans on our bell in the wee hours because she is too smashed to get her key in the door lock. It's only a matter of time before she kills someone.
9:36 PM, March 02, 2008

Anonymous said…
13 people died in road accidents in Ireland this weekend and some politicians are still trying to stop breathalyzing so that their constituents can drive to the pub...
5:29 AM, March 03, 2008

Sundry said…
It's amazing what people will let you do with a camera, really. I used to be so timid! Last year Hydra drove us onto a private boating club's land to get shots of a fire plane scooping up water. No one gave us a hard time at all. So glad you did this.
9:10 AM, March 03, 2008

Liz Dwyer said…
Ian,
I was talking to a couple neighbors yesterday about the car maybe being stolen. I wouldn't be surprised. Gosh I wish there was some way I could find out about what happens in the aftermath of this sort of thing.

Keith,
The whole thing was such a surreal scene so I'm not surprised if the COPS vibe is a little weird. I know my neighbors were a little astounded that I pulled out my camera and started snapping pictures. I felt like the ultimate voyeur when I said it was for my blog.

Heart,
I don't like going out on the weekends here because I worry about drunk drivers. Whenever I'm out in Hollywood I see someone staggering away with a set of keys in their hand. Unfortunately, it's more than just the celebrities doing the drunk driving.

Your neighbor... ugh! Her being allowed to stay in your building is a sign that landlords are truly motivated by greed.

Sharifa,
That's disgusting that they want to stop breathalyzers like that! It's basically saying that a person's life is less important than the ability to drive drunk. What are people thinking?

Jali,
Isn't it? All the dried liquor stained the street the oddest color and it's still three days till our street-cleaning.

Sundry,
The only folks so far who've really minded me taking a photo were the ICE people last week. Last year in New Orleans I photographed the police arresting someone and they didn't say anything to me at all. But I still have to get the courage to ask my neighbor if I can take a picture of him changing the engine of his Mercedes to run on vegetable oil. :)
11:57 AM, March 03, 2008

Kari Carlson said…
sadly, i see the remnants of one-car crashes almost every saturday and sunday morning. i can only imagine what's taken place the night before.

what bothers me most, though, are the parked cars that are all smashed up on saturday and sunday mornings. they're usually perfectly parrallel-parked but just in ruins and you know the owners had nothing to do with the damage. urgh!
2:40 PM, March 03, 2008

Liz Dwyer said…
Just a Girl From L.A.,
I'm in the Silver Lake/East Hollywood area. So you KNOW we see lots of drunks over here.

Kari,
I count my blessings that I have gated parking and don't have to park out on the street because that happens here as well. It's got to be awful to think you're going somewhere, walk outside and then see your car that's been hit by some drunk.
4:31 PM, March 03, 2008

Anonymous said…
That's really scary. I mean, COME ON -- people live in these neighborhoods and walk on these sidewalks and drive on these streets! Man.
5:17 AM, March 04, 2008

the last noel said…
Wasn't there anyone to clear up the mixture of booze and liquor? Doesn't that spell fire hazard? Anyway, I went to a memorial for a young woman, around 26, who helped secure art that would educate countless people on AIDS. She was killed by a drunk driver in December. What a loss!
6:28 AM, March 04, 2008

nyc/caribbean ragazza said…
On the weekends I see people who can barely stand getting into cars here in L.A.

There was a terrible accident not far from me on Crescent Heights and Melrose. Two young hollywood execs were killed by a drunk driver running a red light. Many of my friends knew those two young people. Sad.
7:56 PM, March 04, 2008

Liz Dwyer said…
Miriam,
I know what you mean. There are so many random tragedies that it makes me feel even more like I have to live life to it's fullest. There are no guarantees of another day.

Mojan,
My neighbors that were out there when it happened said they thought the car was going to jump the curb and they were going to get hit. That's really scary indeed.

Noel,
I think someone came over and sprinkled some dirt on the street. But yeah, what if someone tossed a cigarette out of their window and it happened to land there? Oh, that would have been crazy!

NYC/CR,
That's horribly sad. I just wish cars had to be outfitted with breathalyzers in order to turn on. But even with that, I'm sure drunks would find some way around it.
10:05 AM, March 05, 2008