Your Vote Makes a Difference 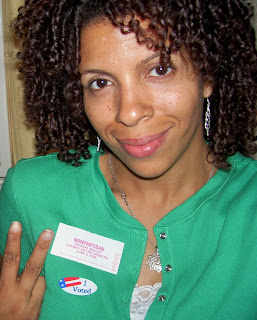 I'm so proud of myself that I taped my

voting receipt on my shirt alongside my official, "I Voted" sticker.

I'll admit, I have zero tolerance for people who don't vote. As in, if I find out you didn't vote, I sort of lose respect for you. I reminded everyone I saw today, "Don't forget to go vote!" and I heard some real b.s. responses from folks:

I also heard, "Well I don't know who all the folks running are."

So go educate yourself about who they are. Use the internet for something other than reading gossip blogs.

Oh, OK. You go on ahead and let rent control end in California. And if votes don't make a difference, why is Barack Obama about to be the Democratic Nominee? Let this election be a sign that votes do indeed count.

Voting is such a sacred responsibility and my not fully executing that responsibility would be a total dishonor to the memory of all my ancestors who could not vote, either because of their race or class. But especially in California if you don't vote, you're an idiot. And here's why: California's GDP is larger than all but eight countries in the world. That's a lot of power and influence. And it's why the saying is that so goes California, so goes the rest of the nation.

Wow, as I type this, Barack Obama just officially got enough delegates to be the Democratic Nominee for President of the United States. They just said on MSNBC that he is the first person of color to be the nominee of any major political party for the top office of any country in the Western world. Wow.

It is a great moment. I'll tell you, I never thought this would be something I'd see in my lifetime. Let me wipe the tears off my cheeks and bring myself down to earth because despite the awesomeness, we still have a white supremacist, Bill Johnson, running for Superior Court Judge out here in LA.

Bill Johnson believes that all non-white folks should be deported from the United States. I'm not sure if he's looked around to see who actually lives in California, but, ahem, this state is over 50% non-white so I'm not sure how he thinks that will go down, but I think he is counting on low voter turnout, voter ignorance and, quite frankly, voter prejudice to get him elected.

You see, Johnson is running against a guy by the name of James Bianco. Johnson probably thinks folks will be more likely to vote for someone named "Johnson" instead of a Latino sounding name like "Bianco". And the sad truth is that certain people likely will go down that road, which is what makes the victory of a black man named Barack Obama all the more significant.

My brother-in-law just called and said, "I just got my 40 acres and a mule."

Mac Daddy Tribute Blog said…
Tami over at whattamisaid mentioned your blog. Thought I'd check you out. I got to see your face and to smile, knowing that you voted. I'm at daddyBstrong.blogspot.com I got you linked. Blessings.
6:43 PM, June 03, 2008

Liz Dwyer said…
Macdaddy,
Glad you came by to visit on such a historic day! I've never missed an election since I was 18, even if it was just a local or state election. Looking forward to your weighing in here in this space! And I'll add your blog to my links.

nyc/caribbean ragazza said…
It is historic.

Jameil said…
i was too stunned to cry. plus it's taken so long and i was sleepy and had to go to work. i'm going to watch his speech from last night online when i get home and give myself a good cry. it'll be great.

Mac Daddy Tribute Blog said…
Yes, it was historic. But something was missing...I think Hillary lost the opportunity to exit the race with some style, dignity. She could have not only congratulated Barack for this historic moment, but say how proud she was to have participated in a contest with such a great field of candidates, how proud she was the people who have supported her and hope that they will now join her in making sure the next president of the U.S. is Barack Obama.

Instead, she said she's going to be consulting with some people. She reminds of boxers who don't know when to retire, when to leave the limelight, when to start thinking of family and chill on the ego.
7:50 AM, June 04, 2008

Liz Dwyer said…
NYC/CR,
Her speech was so disappointing. I felt so sad for her last night because she showed such a lack of character, a lack of nobility. There's always a winner and a loser in these things and you have to be a graceful loser.

Jameil,
It feels like this election process has been going on for FOREVER, doesn't it? And now we're gonna have crazy runoffs here in LA over these local races plus the gay marriage proposition plus the presidential contest -- all on the November ballot. AAGH!

Nerd Girl,
I don't know if I ever really believed I'd see it either. It's wonderful, absolutely wonderful, to be proven wrong!

Macdaddy,
Essentially, if she'd said what Obama said in his speech, it would have been a wonderful moment. Sigh. Yes, we all know someone who just will not admit the truth, who believes it's all about them. It's like an alcoholic who will NOT admit they're a drunk. Her response made Obama seem all the more classy though in contrast and that made my heart smile.

Bygbaby,
It's sad to see all the folks who are incredibly angry and believe that something has been stolen away from them and that there will never be another woman in this position again. Just admit that Barack touches something in people that she really didn't, admit that she had some people that said some psycho racist things...and move on!
10:36 AM, June 04, 2008

Anonymous said…
Barack's speech literally gave me goosebumps at then end. I loved how he and Michelle gave each other dap before he started! That is Black love! The night would have been complete without the evil tormentor still clinging for something. Nightline did an excellent piece on the historic triumph of Barack winning the nomination which was better than what the cable 'news' came up with. I was laughing at McCain's speech because it was soooo lame. It did not go unnoticed however that he and the evil tormentor had coordinated some of their talking points with his offer to take some of her disgruntled voters! EVIL EVIL EVIL!!!
****NOT THIS YEAR....NOT THIS TIME*******
10:59 AM, June 04, 2008

the joy said…
Woooo! (this has been my response everywhere)

My barack the vote shirt came yesterday, and I like to think that it was a mitzvah because I said I sant gonna get the shirt until he got the nom, but then I decided to step out on faith... I feel my heart sing when I vote. Its so simple and meaningful.
2:18 PM, June 04, 2008

Ian Lidster said…
Good for you for voting, of course. And I am delighted about Obama, even if I'm not American, it still affects us, too. We, my love, are moving into a different 21st Century era, and I am happy.
Oh, by the way, Canada's Governor General, Michaelle Jean is a very beautiful, intelligent and graceful woman of color. Since she is our official head of state, that probably makes her the first.
4:58 PM, June 04, 2008

Anonymous said…
Ian - I was reading about how some reporter referred to her as the Negro Queen or something that supposed to be derogatory. Too bad!!! We need more of them. Doesn't he know about the Black princess of Lietchtenstein?
5:28 PM, June 04, 2008

Liz Dwyer said…
Heartsandflowers,
Wasn't that SO cute how they did that? I loved that. I don't know what people are talking about when they try to say they aren't real people because anybody looking at that has to see real folks. And I loved how he dedicated it to his granny. That was incredibly sweet.

The Joy,
It's like total serendipity that your shirt came yesterday! How cool is that?

Ian,
That's right, you do have Michaelle Jean, but isn't she appointed instead of elected? I think the news people mean someone that's elected. Either way, she's got a pretty cool job!

Heartsandflowers,
Black princess of Lietchenstein? I'm going to have to google that!

Liz Dwyer said…
Felicity,
Thanks for saying so! It makes me feel better about the craptastic hair day I'm having today!
8:05 AM, June 08, 2008