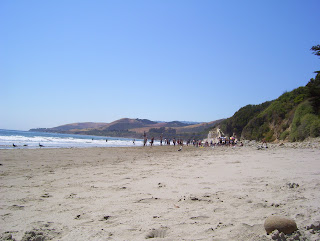 I'm back from Santa Barbara. I got back last night and discovered that Universal Studios isn't the only thing that got a bit burned.

Yes, I forgot to apply sunscreen to myself first thing in the morning yesterday. Seeing as how I walked around in downtown Santa Barbara and on Stearn's Wharf -- all before heading to Butterfly Beach -- I am now a nice lobstery color.

It hurts and I firmly believe that sunburns make my brain stop functioning so here's some highlights from my trip in list form because I'm so exhausted that all I can think of is lists.

1) Beaches in Santa Barbara are beautiful and much cleaner than the ones in LA. I already knew that but both El Capitan and Butterfly Beaches took my breath away. If you haven't been, you should go. Butterfly Beach is a little more chi-chi than El Capitan. Butterfly is technically in Montecito (home of Oprah and a bunch of other celebrities.) But, folks are still very mellow and nice.

2) Speaking of nice people... Yesterday I chatted with an ageless looking woman laying out in an American flag bikini on the blanket next to me. She told me how her family's been in Santa Barbara for five generations. She grew up super rich, married a guy who was also super rich. And then she got most of his money in their super expensive divorce. He cheated, but she said it was ultimately a good thing because the experience made her grow up and start living in the real world.

We went to Arlington West and I talked for a long 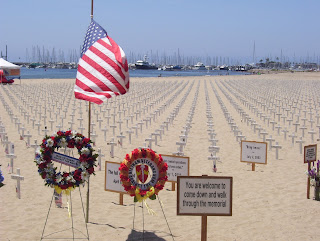 time with the veteran volunteer there. She was a wonderful woman and gave me a nice hug when talking about the war made me cry. There are 3,000 crosses laid out even though the death count is over 4,000. 3,000 crosses covers an acre and so the organizers ran out of allocated space. My sons spent some time looking at all the little pictures of soldiers who have died in the Iraq War. It broke my heart last time I was there. It breaks my heart again.

Oh, and on a totally shallow note, there were some flirtatious Italian guys at Butterfly Beach who blew me kisses and told me I looked like some sort of flower. They were hot and nice and disappointed I'm not single. My ego grew considerably because of it. 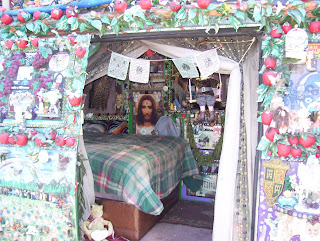 3) I got offered some weed by a hippie at Stearn's Wharf. Dude said, "Here, smell it. It smells great. You won't be disappointed."

When I politely declined, he tried to hold his handful of weed under my nose again and told me it's a shame I'm discriminating against weed since it was created by God and isn't a bad thing.

Dude, that's such faulty logic. God created boa constrictors but I'm not gonna snuggle all up in the bed with one.

His van is pretty cool though. Every single surface of it is decorated. He's lived in it since his divorce in the mid '90s. He said his wife got the house so he decided to check out of the rat race. Now he lives in it and told me how he hasn't paid taxes in 14 years and is totally off the "grid".

Hmm... What if he's the ex-husband of the divorced woman I met on the beach?

4) I seriously OD'd on marzipan. I went to The Andersen's, a Danish bakery and restaurant, on both Friday and Saturday night. They have a lot of delicious marzipan desserts there. It's the only place I ever eat the stuff because it's sort of hard to find here in LA. But, it's sooo super good.

You can only eat a little bit because it's incredibly sweet and I ate it two nights in a row. Gosh, I love that marzipan at Andersen's. I can't wait to go back. And by the way, if you've never had marzipan, you should try some. It's a really old-school sort of sweet and you'll feel like you're in the Renaissance while eating it.

5) I'm actually sort of happy to be back in LA. Yes, I'll admit that I did get a little happy yesterday at around 7PM when I rounded that curve on the southbound 101, just past Cahuenga, where you suddenly can see all of Downtown LA, the Capitol Records building and the rest of Hollywood. Home is home, after all.

Actually, I got even happier after I flopped down on the couch and slathered some aloe vera gel on my sunburn.

Anonymous said…
Yummy weekend - in experience and in flavor. And how fun that it's nice to get home too! I'm delighted you had such a great time.

Anonymous said…
Ooh, big sympathies over the sun-burn, that can be horrible if it starts itching and peeling! The decorated van is totally amazing. He also seems remarkably cool about the break-up and the lost house. I just luuuv marzipan, I haven't had any for ages, must go find some. How could anyone not like it?
1:50 AM, June 03, 2008

Check you out getting play in Santa Barbara. Sorry to hear about the sun burn but it sounds like you had an amazing time anyway.
5:46 AM, June 03, 2008

Anonymous said…
I'm so glad you had a great time. I see you still haven't learned not to talk to strangers!!! Difference - if I see a weird hippie with a decorated van I don't speak to him at all. You find out the story behind the van and his hippie lifestyle. I know you can't help it - just be careful!!!
love, cyndee
7:38 AM, June 03, 2008

Liz Dwyer said…
Claudia,
It's really sad when you see all the photos of the soldiers who have died. They're so young. We only really hear about the war in bits and pieces but when you see something like that, all at once, it's very emotional and it just makes me pray for peace and for those families that have lost their loved ones.

Nick,
The sunburn is a bit better. I usually am really good about putting sunblock on first thing in the morning, but I forgot and by the time I put it on at the beach, it was too late. I have some other pictures of the decorated van that I'm going to post on my photo blog later today. He did seem cool about the breakup and seems happy with his life and his van. I wonder if he has any luck with women now though. Most women I know would not be down for having a relationship with a guy who lives in a van, no matter how cool it is! And yes, find some marzipan. I brought some home so I can continue to enjoy it for a couple more days!

NYC/CR,
I did have a great time and the Italians did make it even better! :) The sunburn is feeling better too. Itchy, but better.

Cyndee,
You would've talked to this guy. Trust me, hearing about all the hippie conventions he attends was pretty interesting. And the kids were a little fascinated because he had a whole collection of Star Wars action figures glued to the van. It was pretty creative! Now they want to trick our car out like that!
9:35 AM, June 03, 2008

Jameil said…
i'm not a fan of marzipan. the real world huh? my real world is beach-free!!! unfortunately! and doesn't come w/a pile of money! never even heard of arlington west. that sounds chilling but a necessary trip. how do you get life stories from people? i guess b/c you're open to it. pas moi. but i love your experiences. yay for ego boosts!
11:02 AM, June 03, 2008

Jen said…
That's the perfect vacation, when you're actually ready to go home at the end. Sounds like a lovely time!