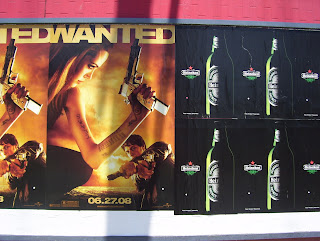 The minute I heard my four year old, "T", say this on our walk home from school this afternoon, my split second reaction was that someone walking toward us had a gun.

It's been eight years since I was robbed in my neighborhood and the cold feeling of a metal pistol stuck in my chest, right over my heart, is not something I care to ever experience again. So I immediately snatched up my child and prepared to run into the street shouting, "Fire".

But unlike eight years ago when I could clearly see two guys running up on me in t-shirts and baseball caps, tattoos covering the skin on their necks, there was not even anyone else walking on our side of the street. And on the other side of the street I could only see another mother and her child.

I didn't have to ask my son what he was talking about though because his eyes were trained on the building to our right. "Whoa, that's a cool gun!"

My eyes followed his gaze and I saw the (see above photo) five-foot tall posters for the upcoming Morgan Freeman, Angelina Jolie, and James McAvoy action flick, "Wanted".

Now, "Wanted" is definitely on my list of films to check out this summer, mostly because every time I see the slick preview for it, I get all, "Whew, that looks awesome!" and, "Angelina is hawt!" Plus, Morgan's acting is always a fave of mine and McAvoy is pretty easy on the eyes and a good actor as well.

Indeed, I plan to see the film sometime in the next three weeks while I'm away in the Midwest, preferably someplace where one measly movie ticket isn't almost $13 like it is at my local theater. However, just because I want to go see this flick, that doesn't mean I want my kids to see these gun glorifying advertisements, especially when they're a mere block away from my child's school.

My first thoughts were, yes that is a big gun. A larger than life gun. The handle is almost as wide as Angelina's arm. I know she's skinny and all, but dang, that's just ridiculously massive. I'll admit I was pretty shocked to see such an advertisement up where kids can see it.

But I didn't need to share all those thoughts with T so I just told him, "Oh no, honey. Guns are not cool and I don't like that picture because guns are very dangerous and they hurt people. Remember, you should never touch one."

"Well that woman's got one and so does that guy!" The sass in his voice matched the gleam in his eyes. "And they look cool!"

We had to talk, yet again, about how guns and gun toys are not OK and that being cool and looking cool is not the end all, be all. But I felt like he's saying, "Mommy, you're such a hypocrite. You wanna go see this movie with guns precisely because you think it looks cool, yet you're telling me that guns are not cool and being cool is not important."

He's right. But I'm also not four and I know the difference between movies and real life. And even though I want to go see the film, I'm not OK with advertisements for an "R"-rated movie being put up a block away from a school where kids can see them.

Then I looked next to the "Wanted" advertisement and saw the ginormous Heineken ads. Clearly, the road from bad to worse is quite, quite short in my neck of the woods. I guess just having guns up there on prominent display isn't enough. Kids in my neighborhood need to be exposed to both guns and booze on their way to and from school.

Gosh, I wonder if gigantic ads featuring guns and liquor are a block away from a school over in Pacific Palisades where Governor Schwarzenegger's family lives. Do they have to see this kind of crap on their way home from school?

What do you think?

I'd hop in the car and go do some investigative reporting for y'all but 1) it's the end of rush hour so it'd take me like an hour to get over there and 2) regular unleaded is up to $4.69 a gallon at the gas station by my house.

As you can see, I'll have to pass on a Palisades road trip. BUT, I'll hazard a guess that no, they don't have to see such things over there. Lucky them.

I know in a week this advertisement will be replaced with something else but honestly, I'm tired of the endless parade of age-inappropriate stuff being shoved down my kid's throats by the billboards in my neighborhood. I plan to email this photo to City Council President, Eric Garcetti's office. Garcetti doesn't live too far away from me. I wonder if he'll have any issues with Angelina, her gun and the beer being strategically placed where every child strolling to school can see.

I'll just have to wait for his office's response. In the meantime, I wonder what would happen if someone in the neighborhood were to decide to take this poster down on their own?
Email Post
Labels: advertising arnold schwarzenegger Eric Garcetti gas prices guns kids media Social Injustice violence

thailandchani said…
Well, I can guarantee you that it doesn't happen in Beverly Hills! Seems to be a real difference between the ads that might appear anywhere near BH - compared to the constant litter of that sort of advertising on Imperial Highway.

I hope someone in the neighborhood decides to take the poster down... and all the others that pander to that kind of thinking and that way of life.

Liz Dwyer said…
Chani,
You make me think about how I used to get so sad when I'd see the billboards on Imperial advertising bus rides to prisons. I hope "someone" decides to take the poster down. It deserves to be taken down too. I wonder what the penalty would be though if someone got caught.
11:37 PM, June 16, 2008

heartinsanfrancisco said…
It's all brainwashing, and not even slightly subtle.

Sadly, we have become a culture that considers violence cool, all the more so when those toting guns are sexy-looking.

I think it's getting harder every year for parents to protect and influence their children to reach for more than society expects for them. I also think that you're doing a great job of it, Liz.
11:51 PM, June 16, 2008

Anonymous said…
The first Wanted review seems to back up what you're saying.

Unknown said…
With all the recent press regarding Father Phleger of St. Sabina in Chicago, it came to mind that he was very instrumental in having those types of billboards taken down in strife-ridden areas.

The church then subsequently raised $$$ to place inspirational ads on those boards. It's all about money.

Glad you are emailing your legislators. The local Y or some other organization would probably do what Father Phleger did in your neighborhood as well if enough parents complained...I'd write a letter supporting your cause on your behalf! Just say the word!

Anonymous said…
It would be good if there was a total ban on all advertising billboards, but that's not going to happen and I suspect bans on particular products are unlikely too, given the power of big business. Realistically in the end it's up to parents to do what you're doing, Liz, and 'interpret' the ads for suggestible kids who fall for the aura of glamour and cool.

In the meantime, yes, wouldn't it be fun if the ad mysteriously disappeared or was blacked out or got graffiti-strewn!
12:06 PM, June 17, 2008

Jen said…
I like the idea of a guerilla graffiti troop of moms "redecorating" billboards of that ilk.

Anonymous said…
You can 1. Call the City 2. Chamber of Commerce 3. School District 4. Advertisers 5. The Company directly

Also call your local tv station 'call for action' or consumer watch to file a complaint. Film it and put it on youtube. Say you're planning a neighborhood watch and you will boycott all related companies until they take the crap down!!! You have the power.

What parent in their right mind would argue against alcohol and guns being peddled to kids unless there was a financial stake involved. Make it public and make it ugly for them.
2:29 PM, June 17, 2008

Toni Campbell said…
They don't allow billboards period in affluent neighborhoods, so this is an issue that they don't even have a concept of!!
3:58 PM, June 17, 2008

Liz Dwyer said…
Heart,
Thanks for saying I'm doing a great job because it is hard for me to not compare myself to other parents who seem to always be doing it better. It does get harder and harder to protect kids. Everything is coated with a layer of materialism and only seeing yourself as the sum of hair, clothes, makeup -- your "look". It is brainwashing. You are solely about what you can buy or sell. There's never anything about what's inside, how you're developing your spiritual capacities.

Anonymous,
Thanks for the link to that review. Interesting that the film's so different from the comic. I'm pretty unfamiliar with the comic so I have no basis for comparison. VERY interesting premise though. I definitely think this is gonna be a semi-sleeper hit.

Jameil,
But say "someone" did take it down, would it be better to do it in the middle of the day or to sneak out there at night when the possibility of being mugged increases? And couldn't "someone" get arrested for vandalism?

1969,
Yes, someone could technically spray paint, but then that would be tagging and that is a crime here in the City of Angels.

House,
Yes, all about the dollar, as always. Father Phleger has done some good things in his life, hasn't he? Is he off of "leave" yet? I realize what I need is a sort of Dummies Guide to Community Activism book. I want to organize neighborhood trash pickups, a neighborhood watch and I want to get rid of the advertisements. I need some Step 1, Step 2 - type of advice.

Nick,
Lack of advertising billboards is one of the BEST things about Santa Barbara. It's so noticeable, especially when you're coming from the Hollywood area where the sides of buildings are covered with huge ads. I don't think there are any billboards in Santa Barbara at all and it's fab.

Jen,
I haven't heard back from Garcetti's office today so that guerrilla troop is sounding better and better. And no, vandalism is not a good thing either. I'm sure the business there would not be pleased.

Heartsandflowers,
See, you are exactly what I need! I was just saying I need a Dummies Guide to Community Activism and voila, your comment gives me some ideas! I know I've already tackled some big issues in my neighborhood this year so why not this next!

Toni,
Good point. You see how frequently I spent time in rich areas? My version of that is driving through Hancock Park imagining which house I'm gonna get one of these days! ;)
4:52 PM, June 17, 2008