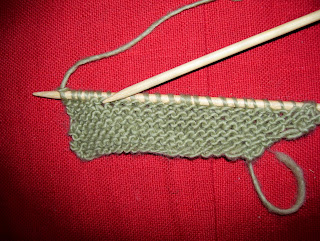 I never thought I'd say that I stayed up knitting till 2 AM. But that's just what I did last night. In fact, I fell asleep with my ball of yarn and my knitting needles snuggled up right next to me.

This knitting thing has been a long time coming. I've wanted to learn for ages and ages but just never got around to taking a class. Something else just seemed to always come up whenever it was time for my class and I never put my foot down and said "no" to whatever else it was that was about to preempt my knitting. I also observed that a couple of the closest knitting stores seemed a bit pricey and a waay too "scene-ish" for my taste. No mas to the hipster thing.

Anyway, I've been slowly working on my list of things I want. Since learning to knit is on that list, I figured it was time to cross it off for two reasons. One, a dear friend of mine is now pregnant and I want to make her a baby blanket and two, I'm going on vacation in a week and I need something to help me relax. I also like the idea of being able to produce something, to be able to say, "I made that!" It truly appeals to me.

To get away from my local hipster scene, I went to a lovely shop up in Eagle Rock called That Yarn Store. The website and the name of the place seemed so down to earth and straightforward and that impression definitely carried over to the store. The owner, David, was so nice and patient with me. I felt at times like I was the biggest, non-crafty imbecile to ever step over the threshold, but he was incredibly encouraging. He was also quite easy to talk to and before I knew it, two hours had flown by. I bought the green yarn you see above and came home to practice immediately because I didn't want to forget everything I'd learned.

Now I can cross "I want to learn how to knit," off my list and can instead add, "I want to be a better and faster knitter!" Better because any of you veteran knitters out there will be able to look at that picture and easily discern that there's some issues with my little green baby. Faster because producing said green baby took a good two hours. I'm slow but at least I made something!

I'm about to take my seven year-old to kung fu right now and I'm so excited to drag my yarn and knitting needles along with me. I don't know what the green baby is going to turn into. Probably nothing concrete because I'm just practicing. But I'll tell you, it feels really good to cross something off that "I want" list. Really, really good.
Email Post
Labels: about me cool people knitting my favorite things

Lisa Johnson said…
Congratulations! I'm a beginner knitter too. I made a scarf, but I want to do a lot more. I need to take a class. I love your yarn. Very nice color and texture. And your stitches look great!
6:56 PM, June 18, 2008

Toni Campbell said…
I was watching tv and crocheting a scarf for a friend when I thought I would get up and check Bloglines. Your post was the first to come up. Congratulations!! I hope to become a better knitter someday, but right now, as a crocheter, handling 2 needles just feels awkward to me. But I could knit a scarf if you put a gun to my head! I agree with Jessalyn that you should check out Ravelry. But I warn you, before you know it, your whole day will be gone!
7:01 PM, June 18, 2008

Sundry said…
I truly love this.

Haven't knitted in years. In middle school I knitted an orange scarf that was way too long and ended up sewing together the ends into tubes and wearing it over tee shirts around the house...a sweater just for the arms. What a little geeek-ette I was!

Anonymous said…
Kudos to you for learning how to knit! I crossed learning to knit off my list a few years ago, next is "finishing an actual knit item." lol
8:37 PM, June 18, 2008

Liz Dwyer said…
Jessalyn,
Yeah! Another knitter! Thanks for the 411 on the website. I just requested an invitation to join. It looks very cool and I want those cashmere yarns on the home page!

Chani,
It does make everything more interesting. I had so much fun knitting during the kung fu class. I'm starting to not hold the needles so tightly and it definitely relaxed me even though it was boiling in there because they have no air conditioning!

Anali,
Thanks for saying that my stitches look great! I like that color yarn as well. I tend to like green a whole lot, especially ones close to that shade of green. That's fabulous that you already made a scarf. I'm hoping to make one as well while I'm away, and then I can start on the blanket since my friend is only three months right now. I have some time to get pretty good!

Toni,
Isn't crochet harder than knitting? Pat yourself on the back for knowing how to do it. The two needles did feel really awkward at first, and I can't say they feel too natural right now either, but I feel less stiff, less awkward already. I can totally see how this could get sooo addicting. I was practicing off and on all day long.

Sundry,
Remember how those little sleeves were all the rage about five years ago? You were truly ahead of the fashion curve! You should take knitting back up again. Go to That Yarn Store. They're very very nice and I'll bet in a couple of hours (or less) you'll be whipping out all sorts of lovely scarves, hats, blankets... or writing capes! :) LOL, why did writing "cape" just come to mind???

Yolanda,
I was thinking during kung fu about how I easy it would be to just keep on practicing on my little green whatchamacallit and never actually finish something. The motion is really relaxing in and of itself. But, I have to do the blanket. I even asked my friend to think about what color she wants, so my feet are to the fire!
10:01 PM, June 18, 2008

Anonymous said…
Liz- I've been a hugely faithful reader(lurker)of your blog for such a long time, and love,love,love it. I've wanted to thank you so many times for beautiful, thoughtful posts that have made me laugh, cry,think and learn (often all in one post!).
So I'm slightly embarrassed that *this* was the post that moved me to comment- but I totally share your new knitter's passion and for the past 4 months have regularly been up to 2/3am knitting.It's sooo addictive, particularly when your Ravelry invitation comes through and you can see all the wonderful things you can make, and have a community of support. There's even a Baha'i knitters group on Ravelry.
Good luck..
Whoa- it feels good to de-lurk!
11:34 PM, June 18, 2008

Anonymous said…
I've never had the patience for knitting, Liz, it's just too easy to nip down the shops for whatever I want! But you reminded me, many years ago when I was in London and knew loads of gay men, they got a craze for knitting and every time I saw them they were feverishly swishing away with their needles! It was hilarious.

Lisa Johnson said…
mina - I always find it so interesting to see what makes someone de-lurk and I guess you just never know! Nice seeing you joining in the conversation here. : )
8:20 AM, June 19, 2008

Liz Dwyer said…
Mina,
Your comment put such a smile on my face. I applaud your de-lurking bravery -- now that you've de-lurked you'll have to put your two cents in more often. ;) And it's so nice to know that there are other knitters who are as obsessed as I have been over the past couple of days. Knitting is so enjoyable. I don't know how I missed out on doing something so fun all these years. It'll be nice to connect with other folks over on Ravelry! I can't wait!

Nick,
There was another guy in the shop besides the nice man who taught me to knit. It's nice to see that folks aren't just sticking to a gendered view of knitting. Why not have more men knit? Both of my sons are curious and want to learn how to do it. I think it's great. As for your other question, I sent you an email about it. ;)

Anali,
It is interesting to see what makes someone de-lurk, isn't it? I'm glad Mina took the plunge today and did so today!

Jen,
I can see myself spending many many hours knitting away. It's quite enjoyable!

Anonymous said…
Hurray for the knitter! Congratulations! Let me know if I can be of any assistance! When you're more comfortable, I have a favorite - knitting in the round (The Sweater Workshop is a great way to start). I can also send you a couple of great baby blanket patterns!

Liz Dwyer said…
Claudia,
I noticed how at first I was clutching the needles so tightly that it was making my hands hurt! I was so worried about getting it right. I was so scared I'd be the one person on earth who couldn't figure it out. And now I'm noticing that I'm relaxing my hands a lot more, managing to relax my body a whole lot more. It feels great.

Thanks for the offer about the baby blankets! I wonder how long it'll take me to make one. I was thinking about trying a scarf over the next month and then tackling the blanket. The baby is due in like late Dec/early January so I think I'll have enough time.

Felicity,
It totally seems like something to do in the winter while you're sitting around a cozy fire. We don't exactly have that here in LA though so I'll have to make do with the year round warmth!
10:29 PM, June 20, 2008

Liz Dwyer said…
Cloudscome,
Thanks! I want to try to go back to the shop sometime this weekend to show them what I've made and get ideas on something small I can work on over the next 4-6 weeks.
6:58 AM, June 21, 2008

Anonymous said…
Let me come out of lurk mode to say: Welcome, welcome, welcome to the knitting world! There's an amazing world of yarn out there... I hope you get on Ravelry soon; it's really inspiring me to ever greater heights in my knitting, and I've been trying to use it to teach the Faith. I haven't had huge success but I have met a bunch of folks I wouldn't have met otherwise - it's all good. Back to lurking....
12:39 PM, July 02, 2008

Liz Dwyer said…
Helen,
No, don't go back to lurking! I'm glad you shared your thoughts. I just got on Ravelry and I'm still doing some exploring of what's what over there. I've been so busy with visiting family that I haven't knitted my little scarf I'm working on in a week. I need to get back to it!
9:34 AM, July 06, 2008