Pink Heels in the Heat

It was no-joke hot in Los Angeles today.

I stopped keeping track of the temperature after it passed 100 degrees. After a certain point, hot is just hot and it's time to just start downing sugar free popsicles and glasses of iced tea lemonade.

It was scorching from the moment the sun came up so instead of running at the park like I normally would on Saturday, I went to the gym. I guess they were trying to conserve energy or something because the air conditioning seemed to be on "low". As a result, it was super hot and musty in there. I ran my four miles on the treadmill and halfway through, I felt like I could be in one of those Gatorade ads where the person is dripping with sweat, it's beading all on their body and their hair is all soaked... ok, I'll stop describing it for you. Just know that it made me feel like a real athlete!

Running a marathon is another thing on my list of things I want and it has been for awhile. I tried to train for the LA Marathon like six years ago but I couldn't keep up with the runs. But now I don't have a nine month old baby or a psycho work schedule like I did back then. I officially start training in August but, in the meantime, I'm having a good time just getting back into running on a consistent basis.

Anyway, at least the heat was good for something. I dried all my laundry on the clothesline and it was crispy in less than an hour. I took the nice, crispy clothes, did some more packing for my trip, and then zipped out to a shoe store and acquired these: 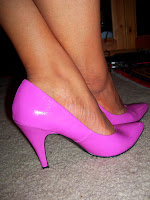 Yes, they're pink high heels. They're so '80s throwback and I've been strutting around in them all night. Chalk the pinkness up to the heat because even now, it's 11:30 at night and it's STILL an unholy 79 degrees. Some neighbors across the street are trying to keep cool by sitting out on their front porch and having a drunken sing-along to the Purple Rain soundtrack.

I'll bet none of them was even born when it first came out.

Nonetheless, they're belting out "I Would Die 4 U" right now. They're sooo off-key that I want to yell back, "Then die already!" but that would be mean, right?

Jameil said…
yay pink shoes!! that heat is nasty!! good gracious!! go head marathon! i've never been a runner but i think i want to do a 5k. my family will be shocked. i don't even run when being chased. get it gatorade ad! i felt like that on the elliptical the other day and was QUITE proud when i got off! dead @ die already! behave!!!
3:03 AM, June 22, 2008

thailandchani said…
Yes, those do remind me of the 80s! What fun. :)

Liz Dwyer said…
Jameil,
They partied till like 3 AM. They moved on to some old school NWA but thankfully the whir of my fan mostly drowned out their rendition of "F*** Tha Police". Yeah for running a 5K. Do the Couch Potato to 5K program. You're not a couch potato at all but their program will take you from not being a runner to running a 5K in 8 weeks. There's some great couch potato to 5K podcasts for free on itunes too.

Nick,
No pink outfit! That might be pink overkill! I'll probably wear them with black, white or green on top and with either jeans or white pants on the bottom. I'm tempted to go get a yellow pair too since I wear a lot of red as well and I'd like the yellow with green too, but we'll see. They were only $20 bucks so I don't feel too guilty buying them.

Chani,
I guess hot weather makes everyone want to get outside and boogie. Barry White in the afternoon is a little weird to me, but yes, it could definitely have been worse! And how good your party people are to be all wrapped up at 11 PM. Our folks were just getting cranked up at 11!

Keith,
I'm already over summer too, but unfortunately, it's just getting going for us. We have till late October/early November for things to cool off. And the pink shoes, they'll be out of style again in three months, but it's something fun for summer!
10:26 AM, June 22, 2008

Anonymous said…
At first I thought the post was going to be about that photo that has been in the media recently... then I remembered your FB update. Wow. When you say pink you really, but really, mean pink!
10:34 AM, June 22, 2008

Jen said…
Those heels rock! And I'm embarrassed to say I probably spent some time the summer Purple Rain came out doing just what your neighbors were doing.

I'm sure we had neighbors wanting us to die, too.

Liz Dwyer said…
Sharifa,
Which photo? I don't think I've heard about it! Yeah, they're REALLY pink aren't they? I can't wait to wear them out somewhere!

Jen,
It is definitely an anthem movie and I guess I should be impressed with Prince's longevity since the crowd gathered at the party knew the songs. They're all like 21 or 22 years old. I could've done without the off-key singing though!

Moody Gemini,
I love the shoes too!

The smog is bad because the humidity is up. The weather pages have listed the air quality as unhealthy and yesterday I could really see the pollution. Hopefully it'll cool down soon!

Heartsandflowers,
I used to wear a 7 1/2 consistently but you know how your feet get bigger during pregnancy? Now I have to wear an 8 most of the time because of it. I had to get rid of lots of shoes after my second son was born!
11:39 PM, June 22, 2008

nyc/caribbean ragazza said…
Okay I'm going to stop complaining about the heat here. It's going to be 90 today. I do remember those 100 plus days in L.A. not fun at all esp. with the haze and smog.

And the pink shoes? You'll have everyone running out to get their own when they see you in 'em!

Gyms and AC. I have had this sneaking suspicion a couple of times at mine that they actually keep the AC a little low so we all get sweaty and feel like we've worked hard. I've been to 4 branches of 24 Hour Fitness and the Hollywood one is always humid...maybe its because its always full of panting, pushing people.
6:29 AM, June 23, 2008

Allison Miranda said…
The pink heels are HOT! Just like the weather...I guess I've just gotten used to heat and humidity living in AL, MS, and LA (New Orleans). Stay hydrated out there.
7:25 AM, June 23, 2008

Liz Dwyer said…
NYC/CR,
Fortunately it already seems like today's set to be cooler. The smog was absolutely horrible. You know if you're on Sunset and you can barely see the Hollywood sign, it's bad.

Sundry,
C'mon, you wanna do the marathon too? I'm going to join the LA Leggers in August when I come back because I know I can't train alone. Only downside is that they meet in Santa Monica on Saturday mornings at like 7 AM.

I've wondered that about gyms too. I figure it's probably pure economics. They just can't afford to keep it really cool in there. I go to Bally's and it's also full of panting, pushing people... and old men lounging around in the hot tub in their speedos!

Randi,
I've been downing water like crazy! You definitely know a little something about heat and humidity! I worked in Houston for about four or five summers and I remember I had the biggest hair ever because of the humidity! It used to grow up and out as the day went along. Folks kept their air conditioning up so high that it would be freezing inside and then boiling outside. I miss Houston. It's a great city.
8:12 AM, June 23, 2008

Dena said…
you're the ONLY one i know who has pepto-bismol color shoes! hehe

Liz Dwyer said…
Dena,
Pepto Bismol! hahaha! I'm worried the weather is gonna float across the country and be there to greet me tomorrow when I step off the plane.

Liz Dwyer said…
Sharifa,
I'm just reading one of the articles about Candice and OMG, I can't believe some folks thought her SHOES were inappropriate and that the photo shouldn't have been run. Oh, I'm gonna do real well in the midwest with my pink heels... or the red ones, aren't I?
11:57 AM, June 23, 2008

Liz Dwyer said…
Ian,
Thank goodness it cooled off a tad bit today! I am so excited to wear my pink shoes out in public. I can barely contain myself! I'm not going to wear them on the plane but I was tempted!

Anonymous said…
Los Angelista,
Have you ever raced any other distance? I gotta say, from a long-time runner's perspective, it's amazing that people will jump right into one of the most taxing, grueling distances to do, first thing! It denies a person the enjoyment of running much shorter distances and maybe, like, enjoying the experience! Even training properly for marathon distance is very hard and time-consuming in itself. The nice thing about starting with 5K – 10K distances is that a person can get in enough fitness to do relatively well with far less mileage and wear-n-tear on the body.
It’s no wonder to me when people who’ve never really run, try for a marathon first thing, struggle through the training and then stagger to a 5+ hour finish and declare “Wow, I never want to run again” Like, yeah.
Please, please consider just trying some 5K’s and 10K’s first. Learn first that there really IS enjoyment in running and racing within developing abilities, finding you don’t have to kill yourself (and your personal schedule) to go relatively fast. In just a few months you can run these distances successfully and like it! And you can run lots of them in a year, learning to get good at it, enjoy it and even be somewhat age-group successful at it.
Please, just at least think about it. Personally, I don’t think I’ll ever race marathon distance again, it just kills so much of a whole year’s schedule; then if everything doesn’t come together on race day, what a feeling of wasted effort. And now you’re done racing anything else for months, trying to recover.