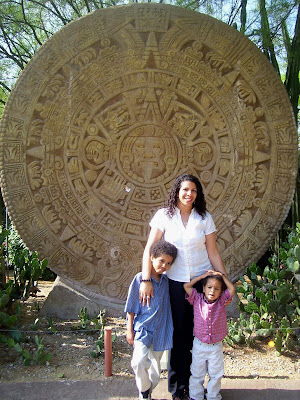 I hope all you mothers out there had a wonderful Mother's Day yesterday.

Mine was all that I could have hoped because I spent it with my two sons. My eldest son is now able to write so well that on the card he gave me, he wrote, "I love you Mommy" all by himself. My youngest isn't writing legibly yet, but I treasure the shy smiles he gives me after he comes to kiss me on the cheek.

What mother doesn't love these things and wouldn't want to have such sweetness forever? It's unnatural for a mother to put her children in harms way. But sometimes harm comes to a child no matter what a mother may do to prevent it.

I've been reading the Los Angeles Times' "Homicide Blog" over the past couple of weeks. It's a gruesome record of all the murders that take place in LA County, not just the murders that make the evening news. The murdered are primarily male, primarily black and Latino. They mostly live in South LA in the low-income neighborhoods I work in.

I thought about this blog for awhile yesterday. After all, you're only a mother because of your kids. And, I can't imagine the grief a mother feels when her child is murdered, when the sweet boy that used to give a hug "just because" is no longer there.

I get particularly saddened by the murders of children and teenagers. They are too young and too innocent, their potential snuffed out too quickly. Maybe their mothers welcomed their kisses or the little notes that said"I love you". Or maybe they had terrible mothers who were emotionally and physically abusive, or alcoholic, or drug addicted.

I'm not any of those things, but someone could still come along and end it for my boys. It sounds terribly morbid, I know. I just know we aren't guaranteed any time on this earth. It can all be over in an instant. Even though I work so hard to be a good mother and strive to teach my sons the things they need to know to be healthy and happy in this world and prepare spiritually for the next, something could happen to them. I don't know if I could deal with that, how I could live if something were to happen to one of my boys.

How does a mother go on after tragedy has knocked on the door and snatched away that which is most precious?
Email Post
Labels: children mothers murder

Jameil said…
i work in the media but on one hand i'm appalled by the homicide blog. on the other hand i understand it. b/c i'm sure in a city of that size, you can't put every single person on the news. and someone needs to understand how much murder happens every single day. senseless deaths are so insane for me. today i wrote a story about an 18 yo who hit a deer, stopped his car in the middle of the street, got out, was hit by a car, then a 3rd car hit that car. motorcycle deaths. i see those all the time too. i understand the blog b/c at least maybe for someone that death won't be in vain or go unnoticed.

sigh. i'm sure all the death is changing my personality. i already thought about it an inordinate amt b/c i experienced a lot of it at a young age.
10:15 AM, May 14, 2007

none said…
That is a scary thought. Luckily most parents that don't let their kids get involved in gangs and drugs are safe from that kind of violence.

However even our small towns are becoming innundated with crack and meth gangs. Parent's don't seem to have time or care enough. to keep their kids off the streets and out of trouble.
11:25 AM, May 14, 2007

Tragedy struck my family recently. Two sweet, innocent teenagers were brutally assaulted and murdered while on their spring break. I have two kids of my own, and my heart breaks every time I think of what parents who have lost their babies must be going through.
3:53 PM, May 14, 2007

Liz Dwyer said…
Jameil,
That story you had to write is so tragic! I worry about freak accidents too. I think I just don't want to ever have to bury one of my children. And I agree, all the death does change our personalities, does change who we are.

Hammer,
I agree about the lack of time that parents have. Parents are so stressed trying to take care of basic needs that they don't always take the time for their children. But, I think a lot of the kids that are shot or stabbed are in the wrong place at the wrong time. There's so many stories of good kids just hanging out in front of their house, talking to friends and then someone drives by and shoots them. Lots of kids in wealthier neighborhoods are involved in drugs, etc., but they don't have the violence on the streets.

West,
No, the morbid thoughts didn't dominate the day, thankfully! Hope you got to spend some quality time with your mom either in-person or on the phone!

Tamigill,
Thanks so much for sharing your personal experience. It's exactly this kind of thing that worries me. There are too many crazy people in this world and I don't think I could take it if what happened to your cousins were to happen to my sons.
12:30 AM, May 15, 2007

Miz JJ said…
My mom lost a child before I was born. He lived for a year before dying of a heart condition. She says there is nothing like losing a child and that part of her died when she buried her son. I think losing a child fundamentally changes you. No matter how you lose your child. There is a definite stigma when your child dies violently, but that doesn't lessen the sense of a loss that a parent must feel.
8:31 AM, May 15, 2007

Mamita Umita said…
This is a reality as a parent. Everytime I hear something on the news about a young child being hurt or murdered it always makes me worry. Having a daughter doesn't make it easier, the potential for her being involved in gangs is less, but there are lots of other things that can happen to her like rape or being molested. It makes me worry everyday, as my greatest fear is not being able to repair some damage that could be done to her not only physically but emotionally.
9:18 AM, May 15, 2007

Liz Dwyer said…
Miz JJ,
I think your mother is absolutely right in that a little part of you also dies when you lose a child. I saw how my mom was last year after my brother died and it was terrible.

Mamita,
I know, I can't watch stuff about children being murdered or hurt. You know that story that was in the news a few months ago about the boy that was abducted and then held in captivity for years? I freak out about that kind of stuff, especially because in public, folks are so, "Oh, your sons are so cute!" I completely assume that everyone could be a potential child molester, weirdo like that. You never know! I trust like 5 people with my boys...some people think I'm paranoid, but I tend to find that those folks don't have kids of their own and so they don't know how it feels.
3:48 PM, May 15, 2007