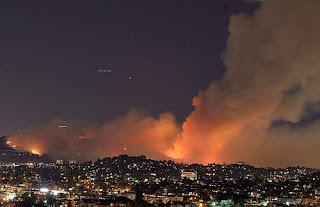 If you haven't heard, part of Los Angeles is on fire. The fire has been blazing through through Griffith Park since yesterday afternoon.

If you don't know Griffith Park, it's the largest park in the United States. It's home to the Griffith Park Observatory. It's home to the Hollywood Sign. The LA Zoo is there. There are miles of trails and beautiful green space. And, it's about a mile north of my house. We go there at least once a week and I love hiking there early in the morning on the weekends. It's strange to think that the trails I love to hike are now going to be charred remnants of their former selves.

How did this happen? One, yesterday was just ridiculously hot. Damn those Santa Ana winds! Indeed, 97 degrees in May doesn't bode well for our summer, especially when we only got about 3 inches of rain all winter. Two, the fire may have been started by someone who dropped a cigarette in the dry brush of the park, although that's not certain at this point.

From my office in downtown, I could see the smoke billowing high into the sky beginning at around 2:30. I headed down to Compton at a little after 4 with some colleagues and the view behind us as we headed south on the 110 Freeway was just shocking. I'd completely figured that it was some small blaze that was just really smoky and that it would be out in a heartbeat. But it was clear that the fire was bigger than any of us had imagined. 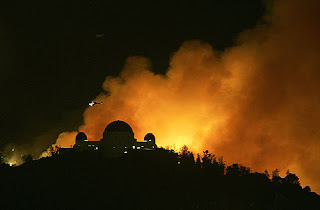 By the time we left Compton at almost 8:30 at night and were heading back north on the 110, we were just floored by the flames visible almost 20 miles away. I snagged these photos from the LA Times website so those of you that don't live here can see what all of us Angelenos saw last night.

Some progress has been made against the blaze this morning, so shout out to all the LA Firefighters who are doing there best. Griffith Park is a true wilderness and it can't be easy to fight a fire like this through such challenging terrain.

Anonymous said…
Yesterday was such a scorcher. As was the day before. Have a bit of overexposure, so I won't be leaving the house today.

Things are always burning...burning. You'd like to think nature has its way of rebounding, and even, in this case, taking care of itself so that it may replenish in geologic good time, and that we do but a small bit of damage.

Liz Dwyer said…
Kim,
I often think about what kind of environmental footprint we leave and there are so many fires that probably don't need to happen. I'm glad you are getting to stay inside out of the heat. I just came back from having lunch at Macy's Plaza downtown and it's definitely hot outside. In the 5 blocks I walked, I felt like I needed a big drink of water. But, I can't see any smoke in the sky, so I suppose that's a good thing.
2:09 PM, May 09, 2007

Jon said…
Liz, I grew up about 45 miles from Yellowstone Nat Park. In 89 our government decided to "Let It Burn" and it seemed that everyone in our nation was just in a panic about how our leadership must have lost its mind. Fire is natures clean up machine, those trails you loved so much will burst with life in a very short time. It is amazing how fast everything returns.

You are probably right about the cigarette butt, it was probably some idiot smoker that did this deed. I've started a new habit while stopped in traffic, everytime I see someone chuck a butt out the window I get out of my vehicle, pick up the butt and return it to the rightful owner with a very polite "you dropped this, that's littering and it's against the law". The shock on thier faces is priceless, usually they are to stumped to even say anything. They must think I'm insane.
7:59 AM, May 10, 2007

Baseem said…
i hate uncontrolled fires! spit on you fire! the same is happening here in MN through the Boundary Waters, place filled with camp sites, hiking, picnic areas building, all burning down. :(

I hope you cali peoples can put it out fast!

West said…
Hearing the latest about this on NPR, last night, I tried to imagine if the heavily-wooded areas that surround my neighborhood were blackened, smoking, charred, and/or wet from fires and fire-fighting.

I tried to imagine having to abandon my home in the middle of the night - or fearing same.

It was a modest attempt at "feeling" the California and Georgia situations a bit more and caring a bit more about the faceless, but very real people who are affected by these events.
8:34 AM, May 10, 2007

Liz Dwyer said…
Jon,
I think your giving the cigarette butt back to them is absolutely fantastic. Good for you! Those have got to be some priceless looks that you get. I also hope the green comes back quickly. But, it's supposed to be so dry here this summer though that I don't know how it can.

Izikhulu,
So you all are getting fires as well? At least you have a chance of rain sometime in the future. We probably won't get rain again till October.

West,
There are so many people here in LA that have a much greater appreciation for fire fighters and how relentless they were in putting this fire down. Usually when we get fires out here, it's 50 miles away or something. Now that the fire is almost out, I feel so much empathy for the folks who live right next to the burned areas. From where I live, it's hard to remember that such a beautiful green space is now a charred black ruin.
12:15 PM, May 10, 2007