My kids have a little Michael Jackson obsession going on.

How did this all happen? Well, remember the days when MTV actually played videos around the clock and you could sit there and tape those videos onto a VHS tape? My husband was one of those folks that did that. So he has every single Michael Jackson video and lots of footage from award show performances. Long ago when he was working in a media services office, he dubbed all this footage onto one tape. Now he's converted them to DVD and my sons constantly want to watch it.

My six year-old, Olinga, is concerned about Michael's skin. "Why can't the doctors fix him and make him black again? He doesn't look so healthy with that white skin. He should go to Dr. Yazdani." Olinga has so much faith in his pediatrician that he doesn't believe me when I tell him that Dr. Yazdani can't fix Michael's skin.

They both have fashion suggestions for Michael. "Michael Jackson needs a Power Ranger shirt to go with his red jacket." 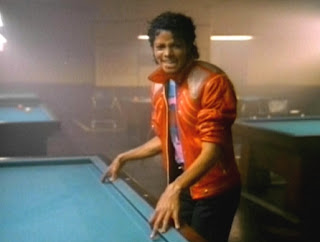 There are also regular reenactments of the dancing/fight scene from the "Beat It" video.

They debate over who's going to get to be Michael Jackson and who's going to be the bad guy. Then they jump around singing the chorus, which they believe to be, "Beat it! Beat it! No one wants to be the meat hit!"

The latest request? They want me to get some rope. Why do they need rope?

"Hey Mommy, can you tie our hands together like they do in the video?"

Olinga also loves the dancing in the video for Billie Jean. But now when we walk to the park I get asked, "Why doesn't the sidewalk light up for me like it does for Michael Jackson?"

The (thankfully, almost out) Griffith Park fire? According to my youngest, "Michael Jackson started those fires, Mommy."

"Why do you think Michael Jackson started the fire?" I asked, even though I was a little afraid of his answer.

Okay. So, of course I had to ask Olinga if he said this. "Olinga, did you tell Toussaint that Michael Jackson started the fire?"

Olinga's mouth fell open and from the look on his face, you would have thought it was the end of the world. He was absolutely horrified! "Michael Jackson started the fires? Oh my God!!!"

He then jumped off the couch and ran to tell my husband, "Daddy! Mommy said Michael Jackson started the fire!"

It took five minutes for me to convince everyone that I didn't say it. Who knows how this got in my youngest son's head. He continued to say that his brother told him this.

At least he didn't tell me, "Michael told me when I was sitting on his lap."
Email Post
Labels: Beat It Billie Jean Fire Griffith Park kids michael jackson MTV Videos

Liz Dwyer said…
Jameil,
I think my name, Liz, is the most traditional "English" name around my son on a normal basis. That's why I love LA though. My kids know how to pronounce names from all kinds of ethnic backgrounds. And with a name like Olinga, he has a whole lot of practice with something that sounds different!

Dena,
I can't wait till they start trying out the MJ dance moves. Usher and Justin Timberlake think they're the heirs to the dancing throne. Nope! The world hasn't seen anything yet. Toussaint is already experimenting with break dancing.
12:30 PM, May 10, 2007

the last noel said…
When I was watcing those Michael Jackson videos in the early 80's--Michael's best musical time!--I would have never guessed that a brand new generation of people would be watching them. Oy!
6:55 PM, May 10, 2007

I made the mistake of showing my kids MJ on youtube. All my kids are hooked now.

Liz Dwyer said…
MsJayy,
Glad you stumbled over here as well. Very happy to have you. I should write about more of the crazy things my boys say. Sometimes I think I have the Wayans brothers up in here!

Noel,
I suppose it's how folks who were alive when the Beatles first came out feel. "Thriller" and "Off The Wall" definitely stand the test of time.

heartinsanfrancisco said…
Your kids are so adorable. I really hope they understand that Michael Jackson didn't just fade one day, and that this kind of thing doesn't happen spontaneously.

Liz Dwyer said…
HISF,
Oh we haven't even gotten to the part of HOW Michael may or may not have gotten that way. And for some reason, I think he might already have the pull-ups and Power Ranger shirt.

Baseem said…
Michael Jackson rocks! his music is so good, its great that your children are being introduced, maybe you should let them listen to Bob Marley, that could create a lot more material for your entertaining posts. just imagine your children saying, "no woman no cry" thanks for sharing liz.
8:44 AM, May 11, 2007

Anonymous said…
I was singing 'lively up yourself' just yesterday.

Anonymous said…
hilarious! everyone in my office is laughing right now!

Anonymous said…
I love it!!! This one has me laughing so hard- you know they are going to be telling everyone at school that Michael Jackson started that fire. You should definitely tell your pediatrician about your kid's faith in his abilities :)
10:06 PM, May 11, 2007

Liz Dwyer said…
Izikhulu,
I don't know why this is but I've never been a big fan of Bob Marley. I don't have any of his records.

Kim,
Those two are definitely my rays of sunshine. They make me laugh a whole lot and I can't even really remember what I laughed about before they were born.

Kari,
I'm glad a little of the in-person hilarity transfers in print!

Yolanda,
Yes, they've already revealed their secret, inside-information to everyone who will listen. However, after conversing with a girl at school, my eldest is now convinced that a much more sinister figure started the fire.

Anonymous said…
So funny! The fact that Michael Jackson is again the choice of a new generation is both hilarious, understandable, and disturbing. (I love your son's name, is he named after the Haitian leader? I'm just starting to learn about your family.)
5:53 PM, May 12, 2007

Liz Dwyer said…
Hey Keith,
Yes, he is named after Toussaint L'Ouverture. No wonder he's such a little emperor, running around issuing commands to us, the loyal servants.
9:55 AM, May 14, 2007

This is my first visit to your blog (I arrived via anti-racist parent), and I must say I enjoy your writing... this is one of the funniest things I have ever read.

Liz Dwyer said…
Gunfighter,
Welcome and thanks so much for visiting! I'm glad it made you laugh after reading it. The in-person effect was absolutely side-stitching!
7:07 AM, May 15, 2007