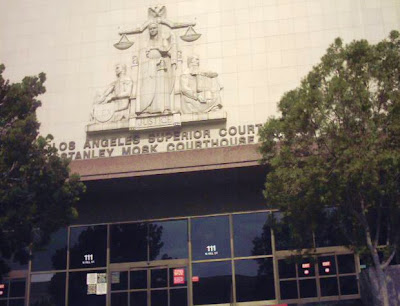 I can't believe it, but I'm actually sitting in the downtown Los Angeles Courthouse waiting to find out if I'm going to be assigned to a trial or not.

Every night this week, I've called the 800 number on my jury summons to see if I needed to report for jury duty. And every night, the automated voice said that I hadn't been called for the following day.

Last night, I forgot to call. I woke up at 6:30 this morning and remembered that I should probably call. I figured I'd hear that voice telling me that I was free to go about my regularly scheduled business.

So now I'm in a room that sure as heck looks a lot different from those rooms on Law and Order. There's wood paneling but there are some really bright fluorescent lights overhead. I just finished juror orientation. During orientation, I learned that LA has the largest court system in the world, with over 6,000 trials. Over 5 million people intersect with the court system out here each year. Wow. I had no idea.

I was hoping to be excused right away but Jose said we'll be here till 4 or 5 this afternoon. Thank goodness for wireless. Now I just need to find a plug for when my laptop battery dies.

We'll see if I get assigned to a case. It's a good hair day so maybe some lawyer will pick me.
Email Post
Labels: courthouses Jury Duty lawyers Los Angeles trials

Anonymous said…
Oh no!!! Good luck Liz!!! I suffered through a long day of waiting back in February ... and my name wasn't called once! So, happily I sat in the very boring room reading a great book and walked around downtown during my 1.5-hour lunch. It actually ended up not being a terrible way to spend the day after all!

Liz Dwyer said…
Colleen,
It's a very long day of waiting, but the plaza outside the courthouse is lovely. Those purple flowering trees are everywhere and it smells amazing out there. Plus, I don't know when the last time I took such a long lunch was! I agree, not so bad at all.

West,
If you saw some of the odd-balls up in here, you'd wish you'd been called and that you got to serve! It's a little scary to think that some of these folks decide innocence or guilt.

I hope it goes whichever way you want it to.

none said…
I've dodged jury duty all my adult life and now that I can serve nobody calls me.

Liz Dwyer said…
HISF,
Well, they sent us all home around 4 in the afternoon and I didn't get assigned to a trial. They called a bunch of folks for a 3 week criminal trial and that would have felt a little long to have to serve. But, if it happened, I wouldn't have minded. Alas, it wasn't meant to be! And yes, Jacaranda's! I never knew what they are officially called, but they are absolutely beautiful right now. The smell is just heavenly.

Hammer,
This was the first time I've ever received a summons and I didn't have any legit reason to not do it. You can get a summons every 12 months out here, but who knows, maybe I'll never get another one again.
1:36 PM, May 19, 2007

Liz Dwyer said…
Noel,
I thought about trying to postpone, but I could get called right in the middle of my summer trip to Chicago or something. Plus it was a Friday...I was hoping it would be a slow day.

Jameil,
Are you serious? Three times? Wowzer! You need to find out West's secret for never being called.