Sometimes when I go places with my two sons, I feel like I'm traveling with a couple of A-list celebrities.

Because of the, "Oh my GAWD! They are SOOO cute!" factor here's some of the things they've experienced:

They have gotten free food and/or drinks from restaurants. And I'm not just talking about Denny's where kids eat free on Tuesdays.

They have received complimentary clothing. "Let's give that little boy an Amoeba Music t-shirt."

They've been blinded by a camera-phone picture snapping frenzy. (The phone wielders were tourists who mistakenly thought my sons were on some Disney Channel show.) And the last time we got pictures done professionally, I thought the photographer was going to have an orgasm. 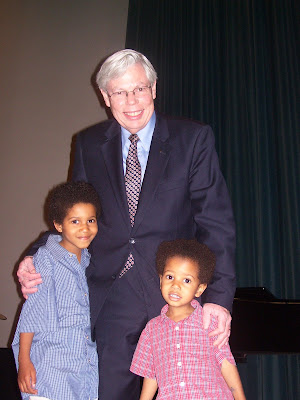 All that enthusiasm ended when it was time for the group family photos. "Um, mom, let's have you move a little to your right. Um. No. A little more. Um. No, let's try a different pose."

My sons are very mellow about all this attention and I've had to learn to not growl at people who compliment them. We've had to have a couple of chats about how cute is as cute does, but they are, overall, very unassuming.

However, this past week, I've had to deal with them making celebrity style demands due to the arrival of an even bigger celebrity, their grandpa.

My dad has been here in LA for work and the level of frenzy surrounding his visit was unprecedented.

There have been requests for more time in the bathtub because, "We need to get extra clean for grandpa."

They asked to have their hair washed, brushed, and dried with the diffuser attachment on the hair dryer. Why all this effort? "So grandpa won't think bugs live in our hair."

My punk-rock, skateboarding youngest made the ultimate sacrifice and washed all his hand-drawn ink pen tattoos off his arms. He didn't want grandpa to think he was a bad boy. He also didn't want to wear blue jeans because, "Grandpa doesn't like blue jeans." This is not true, but the mythology was powerful enough to cause some impressive temper tantrums when it came time to get dressed.

Despite their admiration of him, my dad got to experience being part of the Olinga/Toussaint entourage while we were all at the Cheesecake Factory in Marina Del Rey. Not one, not two, but three servers crowded around to coo over these two. I think my dad was getting a little annoyed by the gushing girl who kept saying, "Oh my gawd! They are so cute! Can I babysit for them? I'll babysit for free, they're so cute!"

Afterwards, my dad told me I should be afraid of the future. I absolutely agree.
Email Post
Labels: Amoeba Music Celebrities kids

Jameil said…
ha! i totally posted about this. i'm not unselfish enough right now to tolerate someone drooling over my offspring. hilarious. i promise i'm working on it!! i figure once the time comes i'll have 9 months to get that together.
10:26 AM, May 16, 2007

I thought that story was going to have a less pleasant ending.

Anonymous said…
We were at a restaurant in Pennsylvania a few weeks ago and two ladies were like "awwwww that little boy is so cute!" Then the cute little boy started picking his nose. I guess I have to claim him.

tamigill said…
I've got two kids of my own that I think are the CUTEST things on God's green earth. But I've got to admit that your boys are two of the cutest babies I've ever seen!! I could just pinch their cheeks. (my southern is coming out) :-)
5:27 PM, May 16, 2007

Anonymous said…
They really are cute! Good idea to work on keeping them level headed so young. I've been trying to be nice about the attention my boys get- but it can get tiresome. The best though was when my eldest actually got us a free upgrade to first class. He was never one to flirt/smile at other ladies but he chose the perfect time to be nice to the airline attendant checking us on the plane lol.
6:34 PM, May 16, 2007

Phillipe Copeland said…
Hey, I was in the same pilgrimage group as your kids grandpa and now that I saw your photo I believe I have met you. Did you used to live on the East coast?
7:31 AM, May 17, 2007

Mamita Umita said…
LOL!! Its the same with Imani! When I have picked her up from school I am amazed at how many teachers from other upper grades, like 8th grade, know my daughters name as well as the students that are between the ages of 10-13?! Did you care about a kindergartener when you were that age - or even notice them? My daughter is a frickin celebrity. Every where she goes in that school its, "Hi Imani!" or "I love your daughter" or "Are you Imani's mom?" Geez.

When we went overseas the attention was MUCH worse - in Italy she was the "Bella" - we got free gelato for 5 days and Italian men stopped to coo over her - we couldn't walk anywhere without someone commenting on her and "Those EYES!! Ciao Bella"

Sometimes I feel like chopped meat next to her - really. I am convinced that I am just my daughters personal assistant, and that she will be a celebrity - I am here just to work for her, do her laundry, brush her hair etc.
8:36 AM, May 17, 2007

Liz Dwyer said…
Jameil,
Yes, the 9 months do give you plenty of time to get used to the idea of someone drooling over your baby. Plus, you do so much drooling yourself that you wonder why wouldn't other people want to drool as well.

West,
Well, there were a few times I thought my dad was going to tell the people to go away...and there was the episode where I thought he might pull my youngest outside due to his inability to stay in his seat. But, everyone played nice and got along. And thanks for the congrats. I think my sons got some throwback genes from somewhere. I mean, my older son has a cleft in his chin and I have no clue where that came from.

Keith,
LOL! Yes, the nose picking (and booger eating). I have to capture some of that on film to show the girls of the future. And who knows, we could be related. There's so much of my family that I don't really know. I once liked a guy in high school and then when my mom met him and started asking who his people were, we found out we were third cousins. Eww...

Tamigill,
I tried to pinch their cheeks on your behalf but they scolded me. "Mommy, pinching is not allowed! You need time out." Oh well. And is that your little girl in your avatar? She is pretty darn cute too! Heck, everybody's kids are cute, aren't they!

Yolanda,
Whoa! An upgrade to first class? That's really something. Makes me wonder what it's like to be Taye Diggs or Brad Pitt's mom.

Phillipe,
No way! It's such a small world! I'm going to ask my mom and dad if they remember you. And, I did live on the East Coast before. I lived in NYC ten years ago when I was in grad school at Columbia. (Wowzer, I feel really old right now!) But, sometimes people think they've met me because they've seen the gender equality video -- and I may have met you sometime when I came out to visit Leili Towfigh.

Sonia,
Free gelato! That's what I'm talking about! I've only gotten free copies at Kinkos because I was a desperate teacher and I batted my eyelashes a whole lot. Gelato is much better. Right now we have 1st grade teachers that all want Olinga in their class. I'm sure Imani is so well loved at school because she's had some proper home training! But, I know exactly how you feel because I sometimes end up feeling like folks are looking at me and wondering how my kids are related to me!
9:19 AM, May 17, 2007