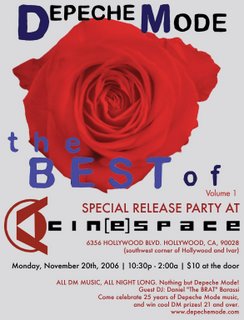 I've been a little wary of going out in Hollywood since my last experience, but for my favorite band in the whole world, Depeche Mode, I'll give it another try.

I'm going to this Depeche Mode release party at Cinespace in Hollywood next Monday. I've never been to any of the fan parties out here in LA so I hope it's not some sort of awkward scene where folks are trying to prove who's the most hardcore fan.

It's a Monday night and it starts at 10:30 pm...and I'll have been up since around 5:30 in the morning, but I figure I only live once so I might as well go. Feel like coming along?
Email Post
Labels: Cinespace Depeche Mode