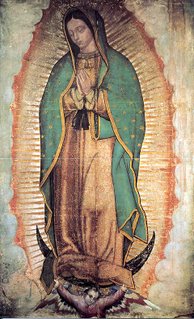 I haven't been to a Catholic mass since I was in 8th grade. Today I found myself at a small church, St. Martha's in Huntington Park, attending the noon service. My mass attendance happened quite by accident. One of the schools I'm working with is in a building next to the church and I couldn't get inside it. I paced around to four different entrances. No luck...every single one was locked. No amount of banging on the school doors or calling the office helped me get in. The entire time I was outside the school, I could hear the singing coming from the church. I figured, why not go over and check it out.

I walked inside to see a small congregation, perhaps 30 parishoners, kneeling in prayer. They were mostly older women with a smattering of old men and a couple of young women with children. The priest was quite young with a head full of thick, luxurious black hair. I couldn't help but think that he was very good looking. I felt a little guilty for wondering why he'd become a priest. I suppose it's not something we think the average GQ- reading guy of our generation wants to do.
Huntington Park is about 96% Latino, so of course, the priest said mass in Spanish. Even though my Spanish is just as non-existent as it was on the day I first arrived here in Los Angeles, eight years ago, all those years of Catholic school training served me well. Despite the language differences between myself and the parishoners, I was able to identify exactly where we were in the service, and was able to kneel and stand as appropriate. The warm cloak of ritual can sometimes be so comforting and familiar in situations where we feel a little bit like a fish out of water.
It was really touching to be able to see the genuine warmth in the eyes of the old man who grasped my hand and said, "Peace be with you" in Spanish during the "Sign of Peace" portion of the mass. See, there are some instances of black and brown unity in this city!
I left before people started lining up to receive Communion. I'm not Catholic and I didn't want anyone to feel uncomfortable if they approached me about going up to the altar and I refused. It might not have happened, but you never know. I think I was also secretly praying that the school would be miraculously unlocked when I walked outside. Nope. It wasn't...further proof that you can't make bargains with God.
Email Post
Labels: Catholic Latino Los Angeles Priest